Brontechnician CollageA1.jpg1737×534 953 KB
The Brontechnician is a cooldown-based caster that converts Devastation and Grenado to lightning. The conversion isn’t full, but the uptime on Devastation is pretty good. The offhand barely saw use so it’s nice to see it deliver. Health regen is a decent source of sustain on this build. The Devotions aren’t used for damage procs, but raw stats and huge utility (Aeon’s Hourglass). 3-piece Pyran’s set is used as a core and a couple of mandatory Monster Infrequents for conversion.

Here’s the screenshot of the character sheet with just permanent buffs on: 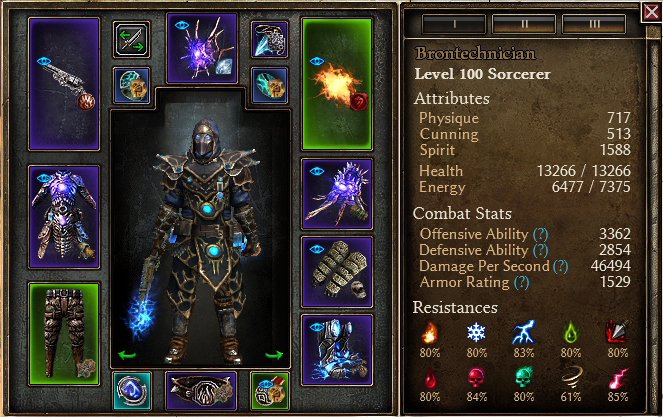 1.1.9.0 build with the minimum affixes and no armor augments (generic setup)

Both MIs used are easy to get while leveling, so it’s possible to jump into the build early. Trozan’s Sky Shard, Mortar Trap, and Stun Jacks are decent alternatives for getting you to endgame.

Performance
This build can hit hard at times but overall the damage suffers from insufficient conversion. Defensively it’s a squishy caster but can survive just fine when cooldowns are played around properly. This video compilation shows the performance against Gargabol, Morgoneth, Lokarr, SR75-76 without Shrines, Crucible 150-170 with just Empyrion’s Guidance buff:

Items
Pyran’s set 3-piece is used here for the obvious support to elemental Devastation, with one caveat: the helm converts away from lightning. This isn’t a large detriment like it seems, as almost all of the damage on the skills is already converted; it only takes away from small secondary sources of damage. That being said, the helm is absolutely sick on any elemental Sorcerer, especially since one of the modifiers is used. The set also greatly helps focus on health regeneration.

Main hand: Barrelsmith’s Crossfire – the main source of conversion that also supports Grenado
Off-hand: Coerced Wraith – it doesn’t look like much but it’s the centerpiece of the build, it even gives some Grenado points; easy enough to get physical resistance on with a Thunderstruck or Sandstorm prefix
Pants: Kubacabra’s Legguards – just a decent source of High Impact bonus points as those are hard to come by
Gloves: Mythical Wyrmbone Handguards – a very good stack stick that supports lightning damage, better than Cindertouch which lost conversion
Boots: Stormbearers – really powerful boots that perfectly support Grenado
Belt: Mythical Ulzuin’s Torment – mostly an obvious choice, but an Arcanist belt wouldn’t fare badly either
Amulet: Mythical Stormseer Sapphire – the build doesn’t benefit from the modifiers (no build does, really), but it had precious conversion and the +1 to Arcanist skills makes it usable
Rings: Mythical Aetherstorm – these actually have quite good stats and work well with 2 pieces of the set, so using proper lightning Devastation gear works out
Medal: Kymon’s Badge – the other MI that makes the build happen, though not as important
Relic: Eternity – the build can fully utilize this baby, with high OA and multiple skills that need refreshing; Conversion + Star Pact is the best completion bonus, but not necessary
Crafting for stun or freeze resistance is preferred.

Augments and Components: Double Ravager’s Eye is a no-brainer; Typhoon Powder is very powerful for a caster that doesn’t need flat damage; Hallowed Ground is very nice when all the stats are desirable, down to the regen; Mark of Mogdrogen is also nice for stacking regen; Restless Remains are good enough with Stormfire and also give some sustain to Spear of the Heavens; Rune Augment is used for damage reduction, and Murmur’s Kiss is a great disengage that also heavily shreds OA.

Skills
As said before, there’s a significant lack of skill points, so the less efficient skills have to be kept at a single point. There’s not too many buttons to click, so Stormfire works very nicely as a filler. There’s a decent amount of knowledge/skill required to play the build to its full potential, thanks to Time Dilation.

Devotions
Aeon has clear synergy with Devastation and Arcanist in general, but also the main sustain source (Giant’s Blood). Spear is easy to pick up with it, other damage procs are not picked up as conversion messes with them, so health regen is boosted instead.
Giant’s Blood is not bound to Blast Shield so it doesn’t miss the timing on Time Dilation.

Feedback
The loss of fire to lightning conversion on Cindertouch sucked, it really hurt exotic builds like this one. A reversion is all that’s needed.
Coerced Wraith is pretty weak for an offhand, and even compared to other offhand MIs.
Stormseer Sapphire’s modifiers don’t really fill any useful niches, can we get a rework?
There’s way too many sources of skill bonuses to Grenado for lightning, several of which I ignored completely and still got more than enough points to hardcap it. The problem is that High Impact, Shattering Blast and Ulzuin’s Chosen are in short supply, I suggest switching these bonuses around.
Give Flashbang a higher cooldown so it can have better use as a Devotion proccer.

Great build and guide. I was thinking about doing something similar to this, but I wanted to use Ulzuin’s set - which might not be viable due to the lack of energy regen on the set (devastation is too energy costly for that I think). I don’t like that conversion on the helm, but I can’t think of a better alternative for this build, especially if focused around regen. I also would prefer if you had ghoul on top of the regen, but it looks impossible to fit it in this build without sacrificing spear, hourglass, or Scythe.

Why do you say the build is squishy? Is it because of a lack of armor absorption? You could solve that by ditching the Mogdrogen component on boots, using Ugdenbog Leather on boots instead, and scaled hide on your pants. Did you try that setup? You lose some life and regen, but I still think it is worth it.