Over the course of a year, devastation itemization has expanded anew, but Pyran has taken the spotlight while other devastation builds couldn’t possibly cut through. I want to shine a tiny spotlight on the most miniscule devastation too: my personal breakthrough.

As these MI buffs began to accrue, this sparked an idea within my brain tissue. What if I made the tiniest devastation of all, smaller than Cindy Lou Who? When all the pieces came through, three sizes my heart grew 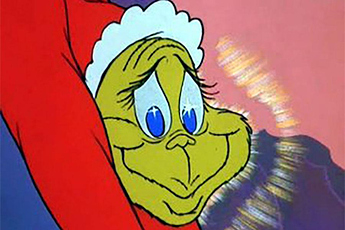 Playstyle
There once was a nem named Reaper
who pursued me, ever the creeper
so as he came nearer
I turned on my Mirror
and he was renamed the Weeper

The Build
Enough rhyming, I need to actually explain shit now. This build uses 3 items which reduce the target area of devastation, turning it into a powerful single-target nuking skill. The small radius combined with the crit mods on the helm and offhand result in insane single-target damage, assuming you can hold your ground. That’s where blast shield and mirror come into play. The duration of devastation is 8 seconds, and the duration of blast shield + Mirror combined together is 7 seconds, meaning you can tank through almost the entire duration of devastation while your enemy stands helplessly underneath. Although the offhand converts aether damage to lightning, devastation’s damage ends up being about 4/5 fire damage and 1/5 lightning damage because the aether damage is converted in so many directions at once.

I focused on elemental devotion procs rather than going for Time Dilation because sorcerer has so many reliable ways to proc devotion skills. I also personally don’t like the Time Dilation/Mirror of Ereotces playstyle. You might also be wondering why I invested 50 points into demolitionist for hellfire mine despite not needing the RR. I tested at least 5 versions of the build, including versions where I invested only 32 or 40 points into the demo mastery, but this version was overall the most tanky and reliable while sacrificing very little damage. Picking up hellfire mine also turns thermite mines into a respectable damage skill due to the conversion on the medal. Even if it doesn’t make much sense (even to me), I go by feel when judging a build while playing, and this version felt the best by far.

In terms of itemization, the amulet, helm, and offhand are necessary to get the tiniest devastation possible. The rest of the items focused on thermite mines (for the highest possible RR), spirit, health regen, and Devastation skill bonuses. I find that health regen is very handy when both blast shield and mirror are on cooldown, and the extra regen has saved my life in at least a few circumstances (like in the video above, for example). The itemization and devotion pathing strikes a good balance between offense, defense, consistency, and healing capability.

You’ll also notice that I uploaded a video which demonstrates that the build can still function even in the worst circumstances. For example, Valdaran makes it very difficult to lure enemies near my devastation, and Slathsarr’s health reduction pools ensure that I can’t tank using blast shield. I personally evaluate the strength of a build based on how it plays in sub-optimal conditions, so I figured this video was the best representation of the strength of the build.

The build’s only downside is that Blast Shield’s damage mitigation becomes less effective in higher shards, so I doubt this build could pass anything higher than shard 80 without constant kiting even on more forgiving boss chunks.

Could you tell me where I get these boots?

These are crafted boots, so you’d need to find the recipe (a random drop) and then craft them

Missed an opportunity to make the whole post rhyme, 2/10.

I would shuffle few components tho: like take restless remains for that slither of adtch from Stormfires, move Bone to chest and take Prismatic in helmet slot for better tankiness (armor absorption is not very effective at these levels of armor, especially on sorc) and take Nullification to at least 5 (bigger the better) - it’s a super effective tool for survival.

And I wonder if Calamitous medal is better due to bit more CDR.

But overall, well put together and creative!

I’ll definitely play around with those suggestions!

Lol man so many great vibes in this thread! And what a fun, creative build idea. Really cool the devs actively experiment with reducing radius as a means of compensation for buffing stats on skills, almost like a transmuter! Id love to see a lot more of this kind of thing.

This was a great read man, inspiring and fresh. Thank you for sharing!

I can’t believe I forgot the most important perk of the build: depending on the order in which you equip the helm or the offhand, the fx of devastation changes to match the mod which was last equipped (so you can choose between lightning and purple devastation)

can’t believe I forgot the most important perk of the build: depending on the order in which you equip the helm or the offhand, the fx of devastation changes to match the mod which was last equipped (so you can choose between lightning and purple devastation)

Woot. This indeed the most important perk of the build but unironically!

can’t believe I forgot the most important perk of the build: depending on the order in which you equip the helm or the offhand, the fx of devastation changes to match the mod which was last equipped (so you can choose between lightning and purple devastation)

Woot. This indeed the most important perk of the build but unironically!

sorry for the noob question but i’m pretty new and i was interested in your build. i notice you (and other sorcerer builds) heavily invest in the Overload talent. I thought this only affected attacks done by weapons…yet don’t we only cast spells/skills ? What is the benefit to this talent? Is it taken only for the offensive ability and aether resistance? thanks much in advance!

Just the offensive ability and aether resistance. In fact, 99% of the time you see people invest in overload, it won’t be for the flat damage

This build looks really fun! Question regarding Mythical Apocalypse - it’s a random drop item, right? I have the blueprint for the regular one but that doesn’t have the -1 meter to devastation affix. Do I just grind until I find the mythical apocalypse, or is there another way to get it? Thanks for putting this up! I’m just that one item away from completion

I tried multiple iterations of Grimtools to create a Carpet_Bomber like build, but I couldn’t create anything that was really to my liking. I’ve tried multiple Sorcerers in the past and I always hated being privy to damage spikes that could kill me at any moment.

I wanted to create a build with the combination of Mortar Trap, Devastation, Herald of the Apocalypse and Ulzuin’s Torch to rain down all the meteors in a straight line, but I kept running into skill point shortages and far less survivability. Have you had experience with Mortar Traps, especially now that “The Big One” is now worth using?

I haven’t played around with mortar trap like… ever, tbh. I wouldn’t really know where to shave points off to make a devastation/mortar build work. My assumption is that it would have to be a mortar build focused on either the base skill or “the big one”, but not both.

Very creative and cool build. I really like the concept of a shotgun devastation character. In fact, I might use this as an inspiration for a future character.

However, there is one thing that nobody noticed apparently: the off-hand you are using converts 40-60% (depending on the roll) of all your natural sources of fire damage to lightning. This means that the original fire part of your devastation (which is not being converted by any skill modifier and is actually stronger than the aether part) gets around 50% of its damage converted to lightning. With this effect, the ratio of fire and lightning damage you mentioned is not accurate.

Although the offhand converts aether damage to lightning, devastation’s damage ends up being about 4/5 fire damage and 1/5 lightning damage because the aether damage is converted in so many directions at once.

I re-calculated the resulting damage of your devastation considering this other source of conversion (I considered the average off-hand roll of 50% fire to lightning) and arrived at the values: 42.93% fire damage, 51.41% lightning damage, and 5.65% cold damage (yes, I made a spreadsheet for this because I am planning another build based on crazy conversions lol). Thus, the main damage of your devastation with this 50% roll off-hand would be lightning damage. The off-hand also converts all your natural sources of fire damage (BWC, Thermite Mines, Stormfire, Apocalypse) to lightning, so - depending on the roll of your off-hand - your build might end up being more lightning than fire centered (Stormfire will be mostly lightning anyway since only its fire part is being converted).

I am not sure if this different profile of damage will impact your build too much since most of your gear and devotions scale elemental damage or both fire and lightning. However, I think that including Widow devotion would be a nice addition - if possible, of course.

However, there is one thing that nobody noticed apparently: the off-hand you are using converts 40-60% (depending on the roll) of all your natural sources of fire damage to lightning. 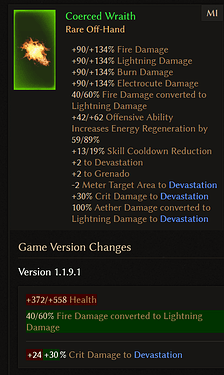 Ok, that was a pretty dumb take by me lol. For some reason I was sure this fire to lightning conversion was there in 1.1.7.0, but should have second guessed myself, especially since the guide was not updated after 1.1.7.0. Thanks for the correction tqFan and sorry for not checking the changelogs on a non up to date build. Dammit’s recent addition is indeed very useful.

If you ever wish to update it though, including Widow would be a good addition, but not sure you still want to do it now that it has this fire to lightning conversion. This discussion might still be useful if someone wants to try this build in the current patch.

Anyway, thanks for the inspiration. This guide is very creative and helped me a lot with the Devastation build I am working on.