This was the most fun I’ve had with an Oathkeeper build. Both versions of this build explained below are simple to play and by mastering them you won’t need any sort of lifesteal sustain, bat, or other silliness.

All you need is positioning and being active all the time. These builds melt anything due to extremely good and far reaching RR. Each and every one of you Burn skills are extremely potent. I’ve never played a build wehere Blazing Ends rune for example, melts so fast.

On a personal note, they perfectly embody what the magical warrior, Paladin archetype means. But that’s me being an Oathkeeper fanboy. So here they are: 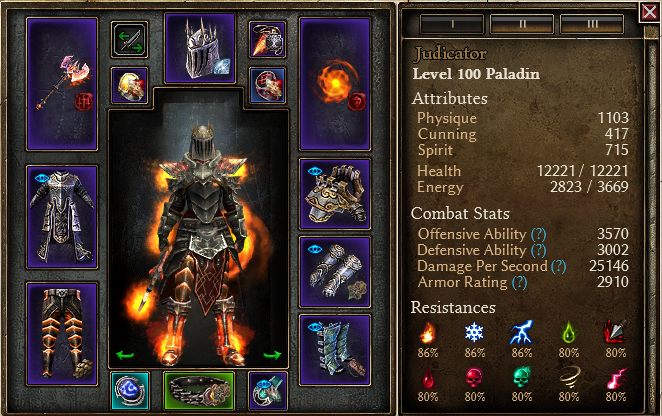 But don’t let this deter you. Once you get it it’s so much fun. Start with version 2 to get the hang of the play style. 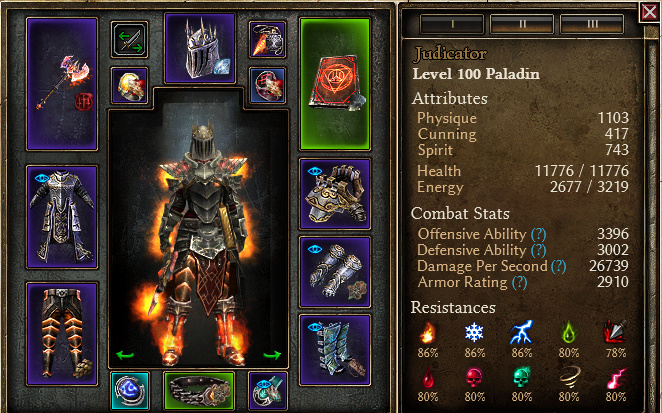 In closing, I’d just like to point out again that this build, in either form, survives so well by:

Thanks for a great guide. That’s the best Paladin that can be made in the game for me for sure.
I also like the writing, screenshots and most importantly - the illusion - as I’ve been thinking about these boots recently.

[I re-upped without background for better FPS on my potato laptop, zoom and more contrast of Fire with blackness]

Thanks man. I really really enjoyed this one.

As for aesthetics. I get it. I’m also heavily drawn to Empyr helm + Gildor as a base for many other themes.

Hellborne Pally has roughly the same setup save for pants and shoulders. Made me think of Doom Eternal Sentinel a bit, a more badass version 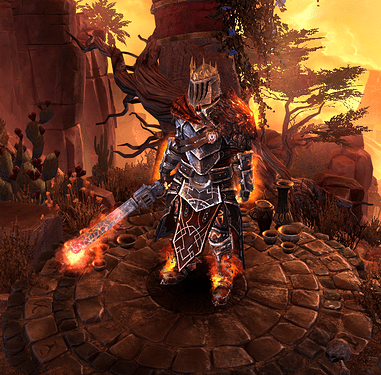 Good build ; I’d keep deadly aim 9/2 , Vigor at 5/10 and steel resolve 10/10 and then invest the balance points in Inquisitor seal for the added damage absorption and fire damage.

then invest the balance points in Inquisitor seal for the added damage absorption and fire damage.

But when will i get to stand on the seal?

It’s counter intuitive to how and why the build works. I’d not get the kill times or facetank heavy hitters really

i don’t understand the medal choice though, isnt’ the one for judgment cd gives more damage?
and have you tried 2x sanctified bones? it looks beefy for fire builds.

Oh damn i totally forgot the build was created as such , my bad!

Both are certainly good options that my greed also inclined towards

. The medal is a good for even more Censure who’s reach for RR and Damage helps the build a lot in many situations. That’s not to say ofc that Judgement medal wouldn’t do great times as well.

The intial ooold buuild lost around on the forum had considerably more judge spam with all tried variations.

As for components. I wanted a sanctified bone but, Prismatic diamond is very nice to fall back on when you get slapped around too much and the trap res on oleron chains is a thing on such a mobile build.

All in all I wanted it to do good times and be somewhat balanced. If anything i’d love Human racial on it. Fabius can be annoying is you don’t kill him in time and casts BB

PS: revisiting that old page it seems i forget to buy health pots quite a lot, as i did with fire fw

Unless i missed a build posted before this one, about time we finally got Judgment Justicar being shown. I have a fire Sigil/Fire Judgment Sentinel with a three piece Justicar that is pretty damn spicy.

Man, those new paladin builds make conflicted. I have one leveled up and abandoned because I don’t know what to with it. I was playing it as fire EoR but it’s kinda boring so I moved on to other characters. Months later and we have aether gunner, pierce gunner, physical melee, fire aegis and now this.

I guess this is a good problem to have. I’ll probably let fate decide - since I’m playing SFF, whatever drops first will decide my build. But I gotta be honest - I always wanted to make Judgement build because I love skills with vortex/black hole effects.

I always wanted to make Judgement

From a leveling perspective i can tell you that Judege /Heart of wrath + vire/volcanic stride supported by all the RR make for an easy experience.

But since you say it’ already 100, who knows what’s best

Awesome build. Def gotta make and test this one out!

SR 80 Video of full vire version added. Also pre boss map included to show it can go well through mobs and other hazards

It’s easy and fun to play at SR 80 still. Just a bit of care. Titan plate in chest is the only change.

Pic taken after i ended the run and uploaded that is why timer is 0:00. It’s not like that in the run itself 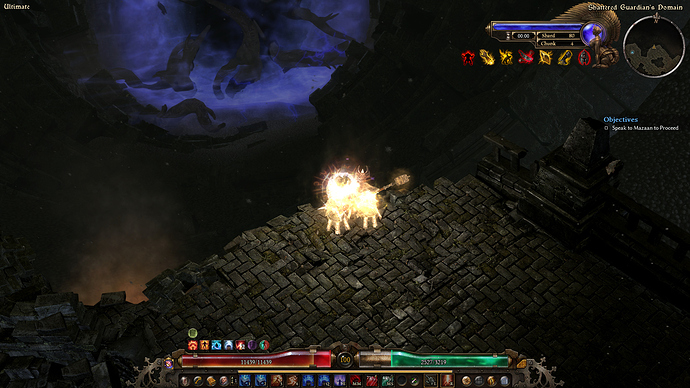 EDIT: Added a more damaging version of Sun spot paladin to the thread. that does around 4:26 Crucible

Very powerful and fun build, i have really been enjoying playing it self-found, though i have needed to use a double-rare Living Ring to patch up resists whilst farming for a better affix/suffix Gargoyle Girdle and Zarthuzellan’s Archive.

Could you explain the ring choices to me? I assume the light’s oath is for the pierce>fire conversion? But the Seal of the Blazing Inferno? Just a good proc and OA?
I have been using combustion band for the elemental resist reduction as i have not had a Light’s Oath drop.

Overall super fun and great for farming. I really think Oathkeeper’s mobility with Vire’s Might is just not fair on other classes!

So I’ve finally found Rune of Blazing Ends (after days of SR farming - it dropped as the last lv 90 augment blueprints…) and imagine my disappointment when I found out that it’s a target-able ability.
Why is the problem? Well, because I like to play with force move toggled on which makes gameplay much more smoother and controllable (VM goes trough enemies instead stopping in front of them) but it makes me unable to target enemies. Do you have a trick for that or should I just stop being lazy and just use force move manually?

btw. this is my character so far:
https://www.grimtools.com/calc/4NOLyLa2
Sun Spot version because I dropped 2 Judgment of Empyrion (and 2 more later) while trying to get Zarthuzellan’s Archive (he was dropping the Codex every time).
You could say it’s more judgment-oriented, mostly because it’s self-found and this is what I’ve got. Less VM but 100% uptime of Heart of Wrath and burn from Judgment. Of course I’ll be replacing the amulet with Flames of Wrath (if I ever get one) because 16% RR it’s not something you can’t easily ignore.

Well, because I like to play with force move toggled on which makes gameplay much more smoother and controllable (VM goes trough enemies instead stopping in front of them) but it makes me unable to target enemies. Do you have a trick for that or should I just stop being lazy and just use force move manually?

I don’t think there’s a trick. Maybe I could figure something out for you using AutoHotkey [Tool] GDAutocaster - play piano builds with ease, autocasting of skills, combos, faster / automatic camera, autohiding of items, centered Inquisitor Seal and more for all games!

For example for to have automatic Force Move on Vire’s Might
you could make Force be pressed automatically while you press Vire’s Might button.
The problem is that it’s too late - when you click it already targets.
A solution to that is delaying Vire’s Might a bit. But it’s not good as well
because it’s your main attack ability and shouldn’t have any additional delay.

So maybe you could make it in a similar way you already have it.
Force Move is On Permanently. But when you press Rune of Blazing button
it’s turned off, then there’s a bit of delay, i.e. 100ms and then you Rune of Blazing is activated.
And Force Move is on back again. Just saying I could probably make something like that
if you don’t like having to press Force Move button.

Why not Force Move on Left Mouse Button (Force Move is on if and only if LMB is pressed down)?
This way you can release it just before you use Rune of Blazing.
But you would need to hold it before using Vire’s Might.

Why is the problem? Well, because I like to play with force move toggled on which makes gameplay much more smoother and controllable (VM goes trough enemies instead stopping in front of them) but it makes me unable to target enemies. Do you have a trick for that or should I just stop being lazy and just use force move manually?

So the build Has Vire on pretty low CD to begin with, and it’s not the only spell youneed to cast to do well with this build. It’s not like a pure Vire 0.5 CD build. It does other things in between movement skills

Blazing Ends- The Burn dmg from this rune on this specific build havingso much RR, is absolutely brutal when it crits. If it had pass through like Vire it would be completely broken.

If you do that the build feels really smooth. Personally I had an absolute blast playing it. btw if you use blazing ends right in combo with Vire, you can cover waaay more space than with just Vire.

Blazing Ends, like Blitz, does not have a distance limit. You get a Nemsis at the otherend of the screen, you immdiately use Balzing Ends and run at him. Then you use Vire to set up volcanic stride for the rest of the incoming enemies, Blaze gain, Vire all of them

…and in between you judge and use sunspot.

Could you explain the ring choices to me? I assume the light’s oath is for the pierce>fire conversion? But the Seal of the Blazing Inferno? Just a good proc and OA?

Yes. It’s a good Poc with massive OA that the build needs and + to Weart of Wrath and % burn Duration which is super important. Combustion ring has none of those, just more RR