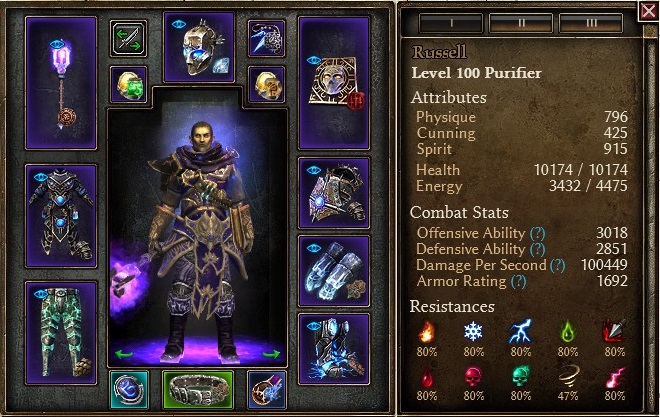 Horn of Gandarr (Arcane Currents): CCs weaker enemies and debuffs all enemies with some handy utilities. The damage it deals is also not half bad and allows us to proc some other gear/devotion procs quickly and efficiently.
Inquisitor’s Seal (Whirlpool): Shields us from damage with it’s flat absorption. Most effective at minimising chip damage from DoTs or crowds than big chunky hits.
Word of Pain (Elemental Seeker): An engine to constantly spawn Elemental Seeker sprites every second due to it’s long duration and AoE.
Word of Renewal: Provides a bunch of benefits like DA, movement speed, resistances and racial damage. Also functions as a helpful heal when we want it.
Grenado (Elemental Storm): Mainly taken as a way of delivering Elemental Storm but also deals a large amount of damage (largely Cold) in it’s own right. Not as much as dedicated Grenado builds but it can still hit for up to 400k dummy crits here which is nothing to sneeze at. On Ulzuin’s Chosen procs, it’s a massive amount of burst damage.
Thermite Mine (Twin Fangs): Makes nearby enemeis weaker to all Elemental damage we deal. Invaluable ability.

Aura of Censure: Like Mines, it makes all nearby enemies weaker to all damage we deal but this time with no input necessary.
Flame Touched: Provides OA, fire damage and makes all Fire and Lightning damage we deal everywhere stronger. Some minor benefits for 1 point on Temper too.
Spelldrinker: A nice bonus of Elemental damage and energy absorption to help keep us up.
Arcane Resonance: Provides a bunch of additional CC resistances and a bit of extra Elemental damage.
Whirling Blades: Some extra Pierce resistance and armour, the passive aura is converted to Elemental damage. Important to note as well is more lifesteal on the component is great due to Horn of Gandarr dealing less than 100% weapon damage.

Enough in Physique to equip our armour and the rest in Spirit for more damage and energy regen.

Keep Word of Renewal’s buff active at all times. For crowds of enemies, applying Word of Pain and spamming Horn of Gandarr with the occasional Grenado clears well enough.

For more meatier enemies like Heroes and Bosses, in addition to the above you want to set down your Seal and Mines ahead of you before engaging and use Grenado until it procs Elemental Storm first. I also recommend using Gandarr a few times early on to proc the -30% reduced target damage as quickly as possible and minimise burst damage.

@ulvar1 for suggesting I pick up Whirlpool as a 3rd T3 constellation.

Style points for usage of Typhos

You could fit leviathan proc in there too https://www.grimtools.com/calc/pZrkKaMN

As the self-proclaimed Doot Daddy, I give this build a doot of approval

I would like to try a “nova” caster build ( D2 light nova ! ) for some time with horn of gandarr and callidors tempest. This build might help me with some ideas, thanks !
It’s always good to have builds with main skill that are not one the most used skill everyone use

You could fit leviathan proc in there too https://www.grimtools.com/calc/pZrkKaMN

Not bad. Loss of % Fire/Lightning damage worries me a little but the proc and nodes look to make up for it. Will have to try it at some point.

Ever since the feedback to pick up Whirlpool from @ulvar1 and confirmed Rimetongue changes in the 1.1.9.1 discussion I knew I’d come back to this and update it but wanted to wait until the patch was out first before doing so.