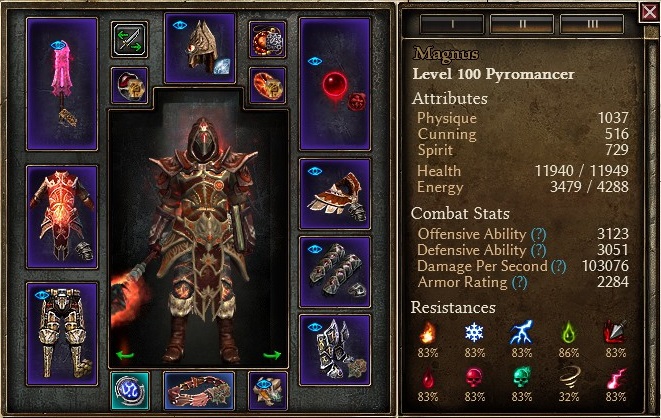 Grimtools
Setup I use

The above also doubles as an affix-less setup, just be wary of the Conduit resistance suffix I use and shift armour augments around accordingly. Stun resistance can be patched up more than what I have via crafting bonuses at Kaylon in the Steelcap District or by swapping the Runeguard Greaves in for some well-rolled Stoneplates.

Blood of Dreeg: Provides Offensive Ability, health regen as a buff and on use provides an on-demand heal.
Blackwater Cocktail (Guardian’s Gaze): Lowers all damage enemies deal, their Offensive Ability by a bit and makes them weaker to all damage we deal.
Thermite Mines: Makes all enemies stood within it’s radius weaker to our Chaos damage.
Chain Lightning (Eldritch Fire): A filler skill to use while you’re not casting anything else. Converted to pure Chaos and with our surprisingly high weapon damage for a caster, it’s not bad.
Blazing Eruption (Abominable Might): Nice chunk of damage and a way to proc Abominable Might for us as we have nothing else.
Solael’s Flame: Provides some additional damage and Chaos RR.

Possession: More damage, resistances to Chaos, skill disruption and damage absorption.
Solael’s Witchfire: Provides a chunk of flat Chaos damage and some Vitality resistance between the base skill and modifier. Consecrated Blade converts some of the Physical damage on Vindictive Flame and our weapon for us.
Vindictive Flame (Giant’s Blood): Provides health regen and casting speed passively. While toggled, every attack you receive triggers an AoE nova centred on you. Enemies outside the nova’s area when it triggers and at least 1 enemy is hit are targeted by tendrils of orange lightning. The damage it does under Abominable Might is pure Chaos, is quite strong and triggers often. All of it life steals and the tendrils CC weaker enemies with knockback.
Flame Touched: Increases our Offensive Ability and Chaos damage when the flat Fire damage is converted through Blood Rite.
Blood Rite: Converts all Elemental damage everywhere to Chaos and alongside our Gloves converts all Acid damage everywhere to split Vitality/Chaos.

Our Physique, Cunning and Spirit are tuned to just barely be able to equip our armour, sword and off-hand.

Keep Blood of Dreeg active at all times. Keep enemies coated in Thermite Mines, Blackwater Cocktail and Solael’s Flame. Mines last a while so shouldn’t need to be recasted often unless new enemies approach or it needs to be relocated, BWC will need to be recast on cooldown to maintain it’s debuff. Use Blazing Eruption until Abominable Might procs and proceed to cast Chain Lightning while you’re not doing anything else. For long encounters, keep an eye on your energy bar.

Really looks good, I’ve been looking for ages for a Pyro build that’s accessible with the gear I have, and a poor character started a year ago at a dead end. I’m terrible at making my own builds so I really appreciate this.

Good job with this build!

Chaos Vindictive flames and nice idea to use Blood Orb for full elemental to chaos conversion.

Build is updated and mostly re-written for 1.1.9.0. Some things I can note on it are:

This is 100% my kinda build, I love it. Not sure why I missed it. It’s very refined. Pleasing to the eye visual aspect and detailed explanations assured me in my new resolution to stop liking guides that lack them, that are only focused on test results and written in a hurry: “Imma drop these screenshots and vids on you quickly and go right to a next build.”

I try to write some stories and details to my build posts but sometimes I just post GT link and some results. idk maybe doing these SSF build journals has worn me out a bit

I don’t usually do mini-build updates but this one and the Gandarr Purifier are one of my absolute favourite builds ever posted so why not:

All i want to say on these changes is:

Lookin good brother! I originally had the ~same setup, but different weapon before the pagar changes. My suggestion would be to try a setup that includes torch if you haven’t. The build was borderlinne unkillable with this setup which is nice, but the sizeable oa boost + additional proc put the damage where I like and it’s still quite a tanky boy.

I’ve farmed gear in SR 75-76 with it for fun though this was before Ember’s set got some of it’s health removed and health regen was nerfed. I haven’t tried since. As for going further, how skilled or patient are you?