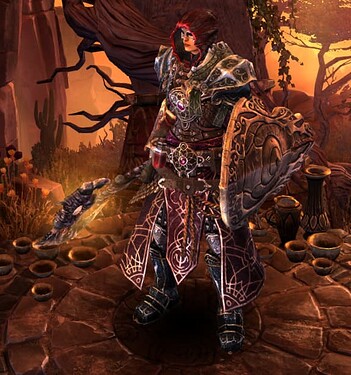 Since noticing Markovian’s Bastion’s cooldown set, I’d been itching to make a build that made use of it. As always, I’m constantly thinking about multiplayer teambased builds, so this build is designed for that in a traditional tank role. She provides 100% uptime of Healing Rain, Stone Form and 75% uptime of Menhir’s Bastion to significantly boost the survivability of the team, and employs War Cry often to reduce enemy damage and to taunt the enemy. Even though it was built for multiplayer benefits, it is still very sturdy as a solo build. 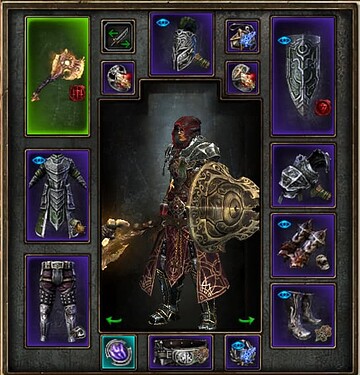 The build works like this: Markovian’s Vigilance and Time Dilation allow the build to have a potential 100% uptime for Stone Form and Healing Rain, Fighting Spirit and about 75% uptime for Menhir’s Bastion and Overguard. Stone Form, Healing Rain and Menhir’s Bastion all extend their defensive and regenerative properties to nearby allies, thus serving as an incredible shield for all teammates. Markovian’s Vigilance and Time Dilation also allow for rapid use of War Cry for taunt and debuff, and Dryad’s Blessing for constant healing. Between Dryad’s Blessing, Stone Form and Aeon’s Hourglass, dot damage does not stick to this build.

I was hoping that the cooldown reduction would also apply to Survival Instincts for higher uptime of that sweet phys resistance buff, but they seem to have no effect on this item’s internal cooldown. Still, the 50% uptime of physical resistance shows noticeable benefit to the build, and the trap resistance is fantastic on the boots, so the boots stay.

Cadence has been buffed to be able to strike up to 6 targets in a 280 degree arc, and Blitz serves as an additional ~490% weapon damage strike to 8 targets in a 300 degree arc. The heaviest hit to land has been 390,000 damage (I think this was a Blitz). While this build lacks OA for a physical damage build, Blitz and Markovian’s Advantage each reduce target’s defensive abilities by 248 or 210 respectively (non stacking), and with Fighting Spirit’s ~100% uptime, OA for the purpose of applying debuffs never seems to be an issue against the targets that I’m fighting. The build significantly lacks critical damage, and does not rely on critical hits for it’s damage output, with non-crit cadence and blitz hits striking for anywhere between ~150-320k damage.

I have two videos below demonstrating the tankiness of Aegis - A vid doing Gladiator Crucible 150-160 with no cruci buffs/banners, and a vid of fighting Callagadra. As you can see, the fights are relatively easy, but also quite slow.

Aegis is able to hold her own in spurts; Face tank for a bit, kite for a bit, repeat. I didn’t have the patience to vid the entire fight of Cally (and indeed, got bored and chose to leave instead of finishing the fight). Because of this, I’m not 100% sure that the build can survive Cally’s rage mode while soloing.

This build would be a lot of fun and provide very strong synergy teamed up with The Rage of Pyros and Khione duo builds, and with Conduit the Damage Support build.