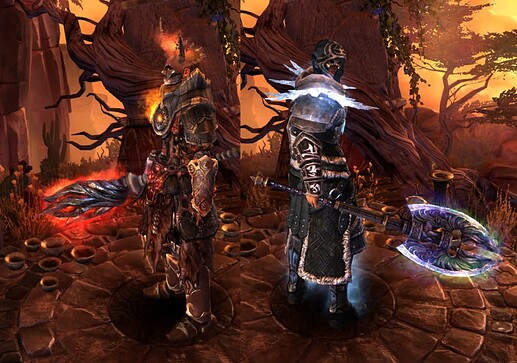 I wanted to make some 2he mage builds to represent the good old fashioned staff mages from other fantasy games. I wanted each of these builds to have specialist gear that gave them more fun magic to cast, so I found some interesting gear set ups to accommodate.

These are concept builds that I’ve attempted to make functional.

Together they boost each other’s damage and survivability.

As solo builds they are ‘ok’. Pyros does fantastic damage solo, Khione’s damage is ok. They each struggle with survivability for different reasons. I’m actually unsure as to what makes Khione as squishy as she is (aside from maybe not enough DA). Occasionally she takes massive spike damage and I’m not sure why. In an SR video she takes 22k incoming dps at one stage fighting some trash mobs. I’m not sure what that’s about. If anyone has any ideas for boosting her survivability, please let me know.

Both builds tend to function as glass cannons, with Pyros being the cannon-ier of the two. That said, in group fights Khione’s damage comfortably moves into the millions (I saw damage around the 2.6m mark at one point). 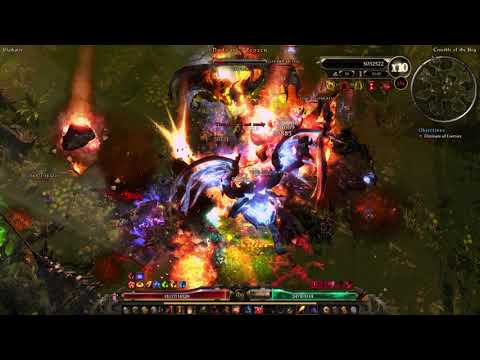 Shar’Zul’s Wrath provides an omnidirectional flame wave of 12 projectiles, piercing through enemies, reducing their OA by 125 and dealing strong damage (and dot damage). Using this skill at point blank on large enemies will ensure they are hit by many of the projectiles, dealing large spike damage.
Apocalypse - Everyone’s favourite meteorite necklace! Spams deathly and sizeable meteors across a wide area.

Pyros’ defenses are bolstered with the use of Inquisitor Seal, Vampire Fangs (with pierce to fire conversion), Ulzuin’s Wrath, and a low level Blast Shield. 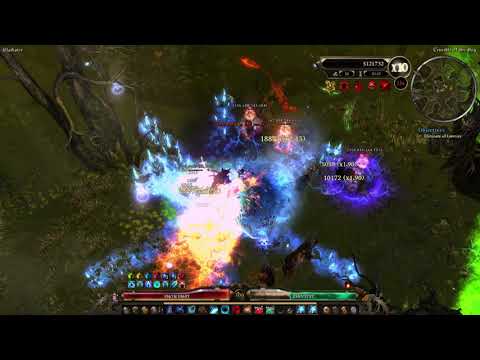 Winter King’s Might - Launches three wave of ice crystals across the floor that fan outward away from the caster and pierce through enemies. This is the ‘default attack’ of Khione, and can crit for a lot of damage per wave.

Bane of Nuram’Siin provides fantastic frostburn and good flat damage, with a nice long 4 second freeze to nearby enemies.

Trozan’s Sky Shard is used for frostburn as well, and summons Blizzards upon the enemy for extra shower.

Khione’s defenses come from a combination of Maiven’s Sphere of Protection, Dreadfire, Wendigo Totem, Mirror of Eroectes, and has lifesteal on Twin Fangs (some pierce and vitality conversion) and through her weapon attacks.

Side Note: At the moment I’ve made Khione a 2he mage because I wanted to make use of the Winter King skills, for the aesthetic, and for the challenge of making a 2he cold mage. But, I would be very tempted to replace her with this untested spellshield build instead - https://www.grimtools.com/calc/D2pzgOeZ . Olexra’s would superboost Pyros’ damage!

This duo would be very well paired with survival buff tank build Aegis and damage buff support Conduit in the team.