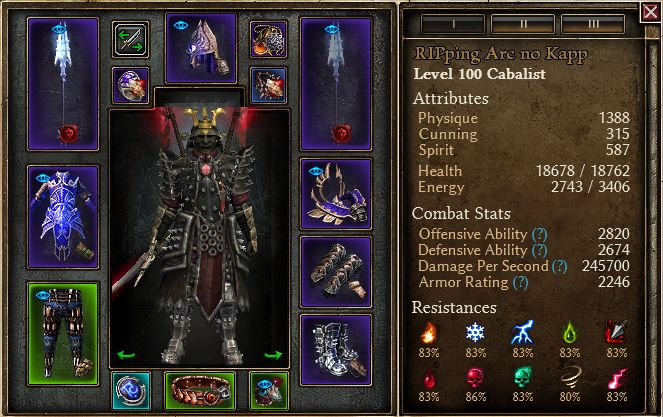 ^ingame stats with all permant buffs, soul harvest and call of the grave up, without other temporary buffs. DPS shown is Reaping Arc, highest crit 548k.
My Ritualist version has up to 300k DPS and 850k crit.

You can level both classes either with Ravenous Earth & dual wield Bone Spike or with Bone Harvest & Reaping Halberd & Death’s Whisper Hood (for which you would have to side with Kymon’s Chosen, which is a little tricky as a Necromancer).

To give a fair comparison though, Blade Arc obviously has item support via e.g. Mythical Grasp of Unchained Might, so overall a proper 2h Blade Arc spam build like a Witchblade with Gutsmasher or a Deathknight with a well rolled Kovan Celestial Halberd will beat the DPS of Reaping Arc. However Reaping Arc needs no gear, can be slapped on top of many already existing builds like e.g. vitality Blood Knight Bone Harvest builds or aether Spellbinders.

The changes that have already been made for Reaping Arc pretty much align with what’s been discussed here, so I suppose I’ll share the general direction. That said, don’t take what’s posted here as gospel. Further changes may be made down the line as we work on v1.1.9.2.

In light of this thread, we’ll also throw in the following:

TL;DR this build along with all other Reaping Arc builds will be nerfed in 1.1.9.2, but Kraken and some animations’ speed will be buffed, so we’ll see how this build will exactly change next patch…

Any kind of feedback is apprechiated and check out my other builds in my HC build collection!

You finally posted it, nice.