Hello again, people! This is my second build post in the forum. I’m bringing something more tradicional when it comes to Pet builds this time.

My previous build (Bane of the Winter King Pets) had a much riskier playstyle that involved get into the fights with the Pets in order to keep enemies debuffed with Veil of Shadow. This one mostly stays out of combat and attacks from a distance with Bone Harvest. We use ill Omen and Devouring Swarm to debuff the enemies and proc devotions. 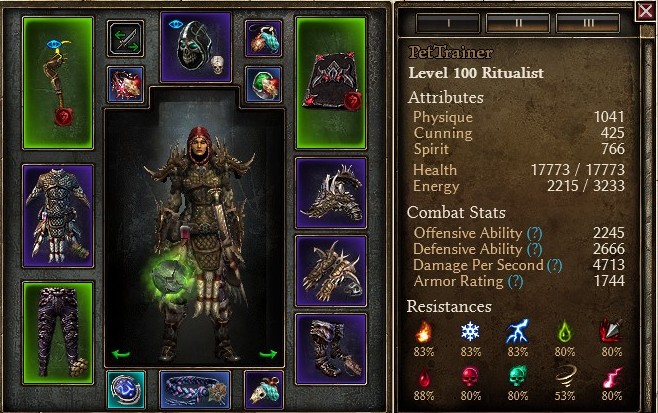 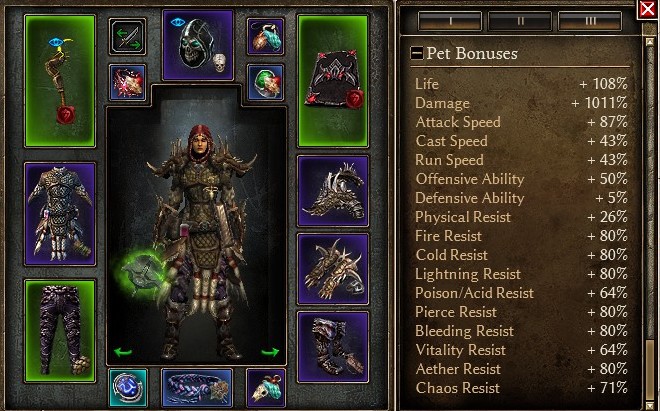 All buffs are active.

This build uses the Ghol’s Malice set to summon 2 Blight Fiends and use their huge AoE skills to debuff and keep enemies at bay. We also have a maxed Briarthorn, a maxed Conjure Primal Spirit, the Eldritch Hound from the Bysmiel’s Command devotion skill, 3 Spiders (from the gloves), a Wraith (from Reap Spirit), the Skeletal Servant (from the relic) and the Eldritch Talon (bonus from complete Ghol set). That’s a lot of minions! It can be a bit tricky to keep track of all of them. Toggled skills include 2x Presence of Might (from Seal of Might), Primal Bond, Mogdrogen’s Pact and Spectral Binding. This last one is a 1 pointer.

The item that enables this build is the Scorpius Pummeler. It converts all the Physical damage from Briarthorn and Blight Fiend into Acid damage and gives them a 50% crit damage bonus. You can farm it in the Korvan Sands and the Sunbane Oasis. You will also find Gannar’Vakkar in the Oasis. The amulet must be farmed from him. If you don’t want to use it, you can go for a Zaria’s Pendant. The Bloodsworn Codex is quite easy to farm but don’t become too obsessed with finding double Pet affixes. That can take an insane amount of time.

The Mythical Necrolord’s Gaze is craftable and has really good synergy with the build. A decent alternative is the Ascendant Cowl. The Ghol set also defines the build and can’t be swapped. The Mythical Fiend Flesh Greaves is very important and i wouldn’t recommend anything else. The Mythical Shadow Fiend’s Cord is really good but you can swap it with the Mythical Nosferattis. The Wildpact Emerald is covering the Poison and Acid Resistance for the player and Pets so i wouldn’t recommend replacing it. The other ring can be replaced with a Bloodsworn Signet. The pants can be farmed very easily but you can also use the Mythical Wildshorn Legguards. The relic is optional and you can swap it with any other you want. Just be sure to compensate for the loss of Vitality and Elemental Resistance.

I haven’t really followed a plan. In fact, this is my first character ever. I used her to finish the campaign in Ultimate for the first time but i never really finished the build. Now, she is complete. I would have a devotion plan if i started this again from scratch. So, i just formulated a path using Grim Tools that is almost identical to the one i’m using. The only difference is that i’m going to replace Fox with Raven as it just makes more sense.

UPDATE: I wasn’t really satisfied with the old setup, so i changed it to improve defenses. This means that the build loses Mogdrogen the Wolf, but offensive capabilities are good enough already. Defense ability (and defense in general) was really lacking, but now it is a lot better and we also have Turtle Shell for emergency damage absorption and Healing Rain for the Pets.

The extra spirit is important to enable the usage of the off-hand as it requires a high amount of spirit. Only throw enough attribute points in spirit to equip the item. The rest should go into physique.

This devotion path is very similar to the one i’m using. It’s probably not perfect but that’s more or less how i finished the build. If someone finds a better devotion path that keeps all the procs, feel free to share in the comments.

I managed to complete SR 65-66 with the character. I made several terrible mistakes and things still went relatively fine. I also killed Lokarr but that was before i completed the build and made all the changes to equipment. I tried Crucible and failed. I died in the final wave. Two times. Feels bad… I should be able to complete it with some effort but i don’t think i was going to complete it within the timer (8 minutes) so i’m not going to pursue it.

I recorded both and i decided to include the failed Crucible run in the video. The SR run is the first part of the video and the Crucible run comes after. Video below. 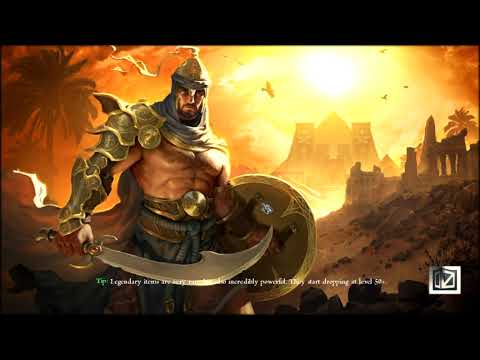 Special thanks to @Gnomish_Inquisition, @Maya and @Ulvar1. They helped me when i posted about this character on the forum. It was my first post and i learned a lot thanks to them. 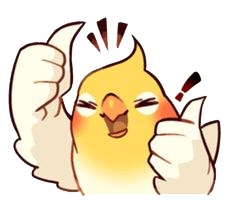 I do have a question though. Is Dirge relic the BiS for the build?
Lately I have been finding myself going for Primal Instinct a lot and Dirge has fallen out of favour in my own builds mostly due to the pet being kind of slow (but it is tanky, will give it that).

Also, I am curious about how having 3x Reap Spirits (23/16) will fare. Maybe even at the cost of the Primal Spirit.

Regardless, Ghol getting some love from players once more is always nice to see even though I terribly miss my 4x Bomber playstyle with old Circlet + Unstable Anomaly

The relic is optional. You can use whatever you want. I was just too lazy to replace it. The skeleton also fits nice with the build’s theme of a traveler who collects all sorts of anomalies and use them to fight against evil. One of the advantages of replacing it is the fact that you won’t have another button to deal with. I have too many active skills and it is hard to keep track of everything during big fights.

When it comes to spirits, you can test and see how it goes. They are pretty much immortal, after all. Primal Spirit is a powerful killing machine though. With the helm and the cdr from the off-hand, the cooldown dropped to around 11 seconds. You can summon it quite frequently. You will need to siphon a few skill points from other areas in the build (remove Primal Spirit and take some points from Mogdrogen’s Pact) to put Reap Spirit at level 16. Probably change some pieces of equipment as well. If you test it, please tell me how things went!

Send me the char file

Only the .gdc file or the char folder?

Only the .gdc file or the char folder?

only the .gdc file needed. will test and see how things go

hey there. do you by any chance have any info on what order to get skills for this
please?

I haven’t played in years, and I have only ever played a vit damage occultist, so I am not sure what I’m doing here.

I just know I want to try a new build out.

Welcome to the forums! I hope you learn a lot from the community!

I always level by focusing on one mastery first. I’d go for Shaman and max the briarthorn and its skills while slowly progressing through the mastery bar. I throw 2 points in the main skill (Summon Briarthorn) and 1 point in the mastery bar. After Briarthorn is finished, i start throwing 2 points in the mastery bar and 1 on the Briarthorn skills (Ground Slam and Emboldening Presence). Once you get to level 50 on the mastery bar, you should max Primal Bond and the Primal Spirit. It is up to you to decide which one is most important to max first. After that, max Heart of the Wild and Oak Skin for survivability and Wendigo Totem last for Pet sustain during combat. The rest is just 1 point.

After you are done with Shaman, move on to Necromancer and work on maxing Blightfiend. I alternate 1 point in the skills and 1 point in the mastery bar but you can choose to max a skill before advancing in the mastery bar. Choose what makes you more comfortable. Only put enough points in Mark of Torment to have it at level 6 by end game. You don’t need to worry about this too much unless you are playing hardcore. The rest is just 1 point. If you have spare points by the end game, you can throw them into Mogdrogen’s Pact or Soul Harvest. That’s it. I hope you enjoy it.

must be a popular class. I can see why though as shaman is great for a new build due to it’s mechanics giving it good DPS and health regen.

are there any good builds that don’t use shaman though, there has to be some, right? (like for any classes other than shaman)

There lots of builds for several classes or class combinations. Some class combinations are weaker than others but all are playable. Shaman is just very user friendly and good for someone starting the game. Spellbinders (Arcanist + Necromancer), Conjurers (Shaman + Ocultist) and Infiltrators (Nightblade + Inquisitor) are really strong. Check the build compendium for a list of builds separated by each class.

my older build I was playing was a conjurer. I was going to continue with this to get through the game the first time, but it’s been so long since played, I’m just making a new conjurer so I can do the story from the beginning.

I was only at level 40 or something anyway, so not loads of progress.

Hi, I am also doing this build right now, but I use Necromancer as a first class : 3.

Blightfiend is the main Pet of the build so there’s nothing wrong with your choice. I prefer Shaman because it’s the mastery where you will be using most of your skill points and the 3 points per level that you get up to level 50 will make life a lot easier when it comes to leveling. Progress slows down a lot after level 50 so i’d try to get to Primal Bond before that, at least.

The 30% RR from Rumor is essential but we also get 25 flat RR from Eldritch Hound (Bysmiel’s Command), another 20% from Devouring Swarm (equipment bonus) and another 10% from the aura of the Eldritch Talon.

Oh shit, missed it somehow… Got to study build and equipment deeper then fast view)))) TY 4 the answer.

Didn’t you thougth about skeletons+briarthorn on vit damage? Wanna try, according to my thoughts about conversion and RR sources, should work…

I haven’t found any items that convert all physical damage from to Briarthorns to vitality. Marrow Band offers some conversion but it tops at 60% and you sacrifice a lot of better options in ring slots. If you go for this, you should probably focus on skeletons and use the Lost Souls set. If you go for double Briars, you are losing a lot of damage due to a lack of complete conversion. You will need to test it and see how it goes. Good luck!

Yes, i forgot about that one. It is possible then. But the rings are a big sacrifice.

I noticed that you are using low level augments on the rings and amulet. wouldn’t using Osyr’s Guidance be better?