We’re back! Evoker of Elgoloth took a couple nerfs in 1.1.9.6 PT to go along with buffs to passthrough WPS. In the small amount of time I’ve had to play since release I’ve been tinkering. I was further pushed because some poor dude on reddit was trying to kill supers with the old offensive setup in 1.1.9.6 and that just doesn’t work anymore. However the usual reddit advice of 8,000,000 DA minimum was being tossed around so let’s correct that again while we are at it.

In game (apologies about fashion, it’s a disaster but I haven’t bothered updating yet) 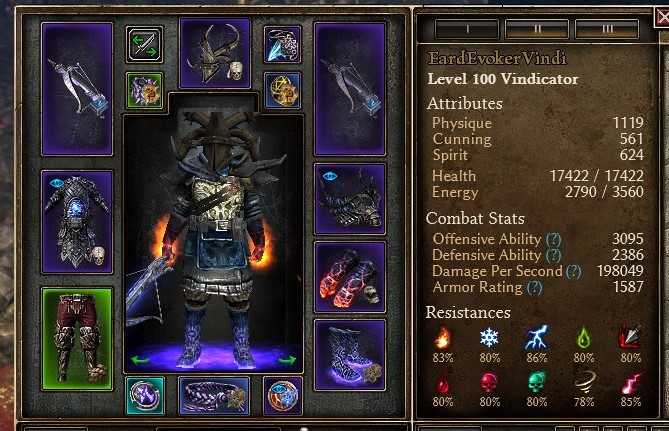 We swap Ludrigan helm for Korvaak, grab some solael pants (ideally with a vitality roll), and shop or relatively easy farm for a living ring (xyz of the hurricane, prefix is less important). Devos drop tempest for now and go spear for Ravager, although I’d go Korvaak in SR when the crit OA threshold is not an issue.

In general we grab a bunch more HP while keeping a damage heavy focus so we can kill nasty stuff via buffer and leech.

Someone with more patience can try Cally, I don’t do that fight

Did Grava forgot he can use null? From experience it usually takes like five seconds for him to use it after aggroing him, i have never seen twenty seconds (more like fifteen to be fair) passing without him using it. He even uses the wing flap attack and double punch twice without using any null in between.

Outside of that, guess i can ressurect my Evoker Vindicator. I was gonna bring it back with Evoker giving passthrough to Savagery, but then Zantai literally murdered it. Thankfully, passthrough to Storm Spread seemed to allowed it to exist in some form.

I’ve only played SR this patch after over a year (maybe?) of not touching it and I’ve never seen grava do his null once on 2 builds I used. Zantai probably lengthened the timing before he uses it.

So Cruc gets the non-null Grava that gets backed up by other Nemeses, SR gets the Grava with the longest null intervals but has the highest health pool and i assume damage, and main campaign gets weakest in terms of stats but null spamming Grava. Seems balanced.

May be from having swift mutator and a bunch of stun procs. Normally it’s korvaak proc causing the fun but I’ve seen it mess with nemesis attack patterns before. I was expecting the null bolt on what turned out to be the red swings at the end. Don’t think he normally swings 3x in the middle of his pattern.

Recorded a shattered SR75-76 run with the defensive setup: Fateweaver chest, 1 point wendigo totem, physique investment. For most folks this would be the recommended path unless you’re looking for all the damage as it does feel safer during aggressive play 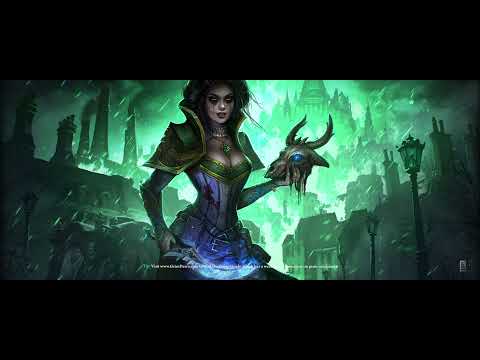 The pets stats do indeed only affect pets, but the base stats and the lightning flat+% granted skill proc apply to the player

I would not be surprised at all if the storm spread + upheaval approach is still stronger, but sometimes I’m a sucker for style. Converted chilling rounds is noticeable damage over the other filler WPS but all the other chilling rounds WD mods are also blocked

That’s what I thought but you mentioned

Rings: I prefer 2x glyph of kelphat’zoth, as they bring the most damage and we can cap attack speed still with decent rolls

Which confused me because I assumed you meant rings have AS, so I figured pet stats applies to character ones; but I understand now, you mean despite rings not having AS, with good rolls on other gear AS is capped. My bad lol.

This build looks great! Lightning is my favourite damage type, haven’t done a ranged build for it yet. Levelling a Vindicator (Primal Strike lol, it’s so easy) for this right now. Is there a reason that this build isn’t in the build compendium?

Guys this build is seriously fun. Storm Spread proc is one of the most devastating and amazing WPS in the game! Bumping this so people can see it, and hopefully @eardianm submits build to the compendium!

Hello everyone. First I want to say thank you for this very nice forum. Playing GD for a few months now I benefited a lot from it. Just discovered this build, I was wondering about leveling. A rough discription of which class first, skillpoints and order of the devotions would be very nice.

Hard to go wrong with Primal Strike. There’s a ranged gun (Ugdenbog Sparkthrower) that is great for it. Rush for Aura of Censure, invest one point in the passives (not WPS, they don’t proc off of Primal Strike). Get Wind devils for more rr, and seal for some damage absorb.

Thank you for first aid, I will try and find out what´s working…will keep you updated

Oh yeah if it’s your first char, getting the Sparkthrower will not be until later. You can always use melee Primal Strike or find a different gun. Enjoy!

78% Passthrough, baby. I wonder how well something like this tests out compared to the original setup? You can use whatever devotion set-up you want, I want to see how maxing out both Storm Spread and Chilling Rounds does now that both of them are pass-through.

Definitely has potential to go up, might beat upheaval investment versions now if test patch holds!