If ur looking to destroy mobs like this dragon soldiers & waggons you came to the right place!

Forword:
Recently kinda been on a roll when it comes to making & posting builds… and here we are again.
This time I would like to share my most likely strongest build yet.
Strongest not as in the fastest or most damaging but most compfy to play & durable.
The character has been able to defeat

the game threw at me without the usage of any buff / debuff potions as I will show you later bellow.
Good piloting is required as well, so if you are looking for a brain-afk build this one isn’t it.
That being said the build is still somewhat forgiving, dont push your luck tho!

Let’s get to the point where I show you what this build archived!
(With some minor added info)

Cruci is fairly compfy for the most part, watch out for Grava + Maiden spawns and don’t sit in Mad Queens face when she starts to fire her vitality barrage. 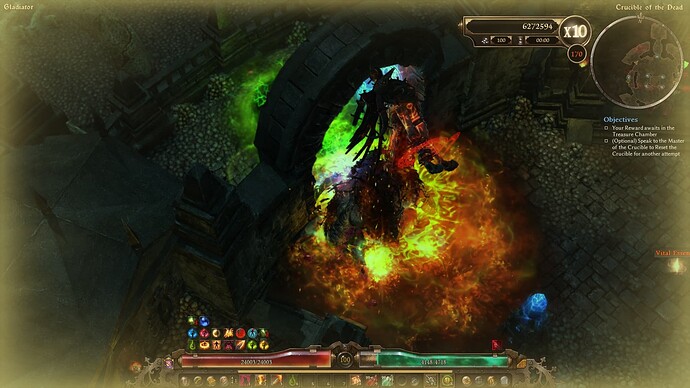 Video provided by Mad_Lee since my internet is very slow atm: 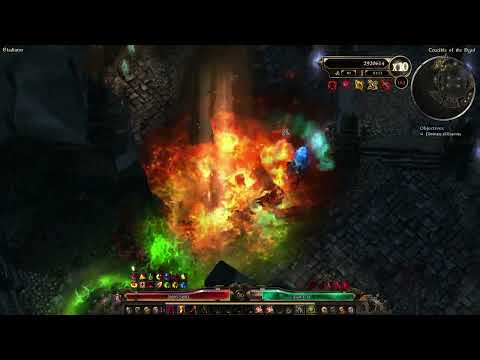 If you are just out for some relaxed farming in SR 65-66 this build will easily carry you without any problems.
SR 75-76 is fairly compfy for the most part and so is SR 80, minus some bosses you should watch out for: Shattered Korvaak, Iron Maiden, Grava’Thul, Mad Queen & Fabius if he decided to spawn with an absurd weapon. 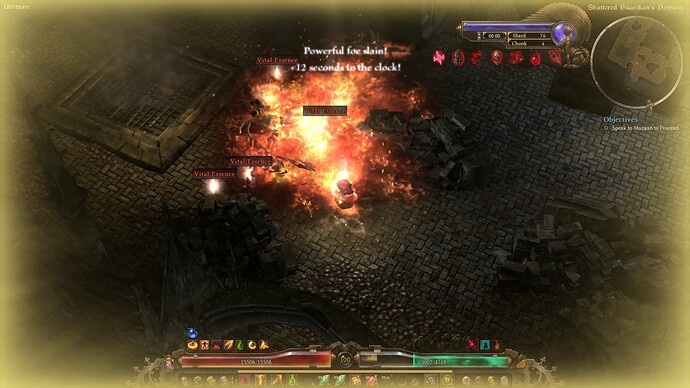 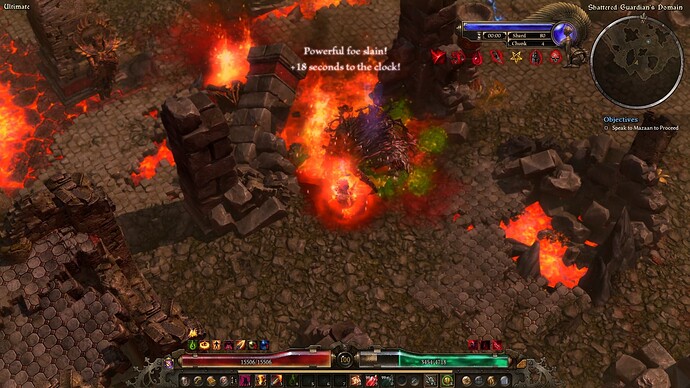 Time for the big bois aka. celestial bosses.

Clones of John Bourbon:
Very straight forward fight. Try to keep the clones together in ur Thermite Mines, Blackwater Clocktail & keep them cursed while showering them with Dreegs Evil Eye. 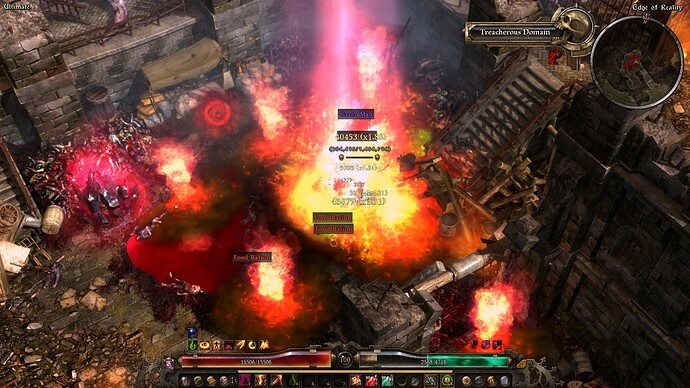 Lokarr:
He is easy for this toon unless spawned with an absurd weapon. (which is extremly rare)
Just stay in his face, keep him debuffed and spam away. 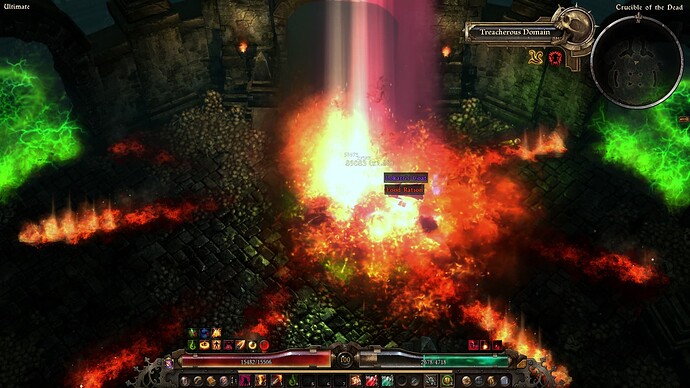 Avatar of Mogdrogen:
The first phase is straight forward, keep him debuffed, spam Dreegs Evil Eye.
On the second phase you have to pay attention tho, keep him debuffed as well while using DEE. Make sure your debuff skills went off tho!
He will often stun you!
Also time your Blood of Dreeg heal & HP pot right! 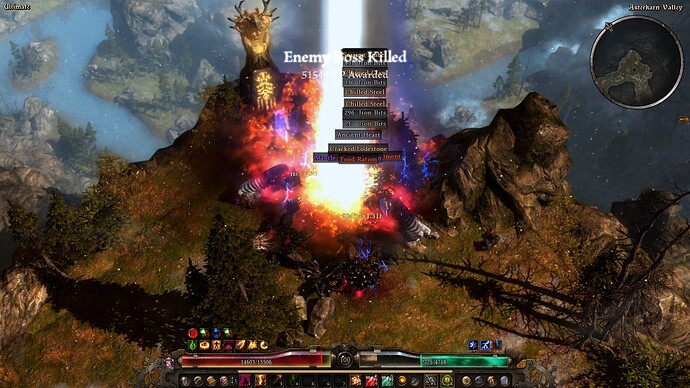 Ravager (of Minds):
This is where things get more difficult.
As with Mogdrogen you want to keep him debuffed as much as you can.
The trick here is, to micro kite him within your Blackwater Cocktail/Mine area while throwing in DEE’s while also trying to avoid his attacks.
Same thing for phase 2 of his fight, things just get alot more hectic and the window to attack is alot smaller plus his damage alot higher and can kill you quickly! 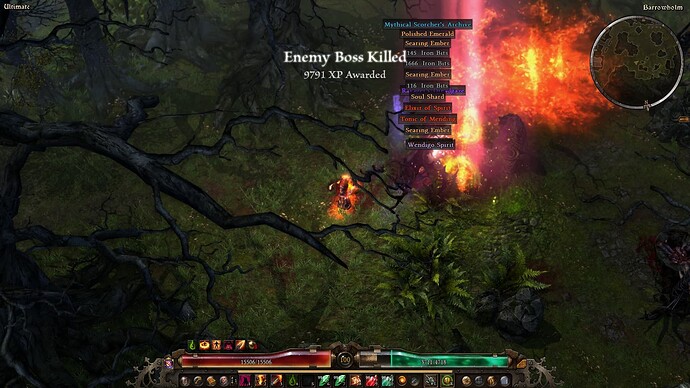 Callagadra, Scion of Sands:
Now things get really dangerous.
This boss can make very quick work of you if you don’t pay attention and even quicker work of you in phase 2 when she goes berserk!
You want to keep her away from you as much as possible while debuffing her with BWC, Mines & CoF while throwing in DEEs if time allows it.
This is a fight of patience, paying attention, proper repositioning with movement skills and timing your skills/pots/heal right.
Not for the faint of heart! 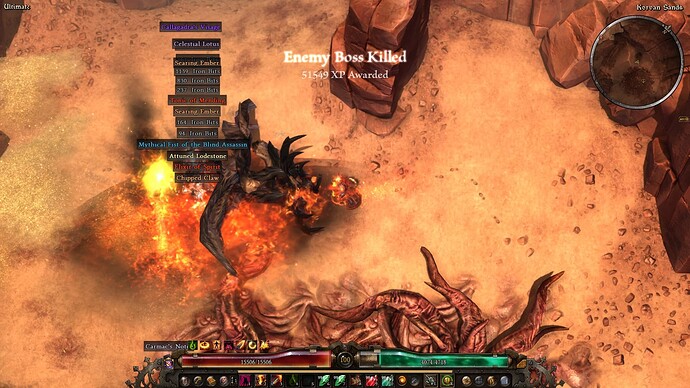 Crate of Entertainment:
This is the most troublesome and most dangerous celestial boss for this build by far.
While Crate himself might not be the most durable of bosses his damage is absolutly bonkerz!
Great attention and focus is required for this fight, especially without the use of buff-potions.
You want to kite the boss towards the beginning of the area while keeping him debuffed as much as you can and fire DEEs that hopefully dont get blocked too much by the boxes he spawns.
Said boxes you want to avoid at all cost!
Once at the start of the area you want to use an Aether Cluster and rush past the Boxes & Crate so you can kite him again in the area where you 1st met.
Main issue is the boxes often blocking DEE from hitting Crate.
This might take some attempts, I won’t sugar coat it, Crate is rough for this toon but doable. 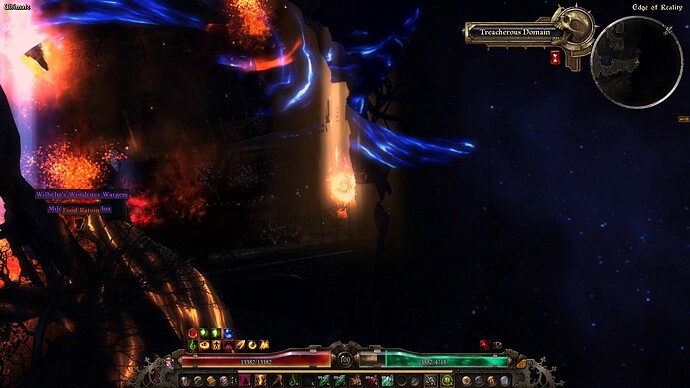 Pro’s and Con’s of the build:

And with that we’re at the end.
Shout-out goes to Mad_Lee for providing a cruci run vid. for this build.

Thanks for reading and if you have any further questions, suggestions, constructive criticism or anything else please feel free to make a post!

I dont see a reason for a nerf here.
Sure, the build has a fair amount of regen but as said, if u think u can facetank shit 24/7 with it ur in for a rough time & a world of pain.
Plus it’s a slowpoke in cruci.

I hope Zantai sees it that way as well, if not I gladly send him my save so he can see for himself as well.

There will be no nerf… surely… please…

Great job @MergosWetNurse on the build!

And thanks for the reminder about Dracarris - my Fire/Chaos DEE Pyromancer was using the Hellrune Carver instead. I was ignoring Dracarris as a pet weapon and passed over it!

And thanks for the reminder about Dracarris - my Fire/Chaos DEE Pyromancer was using the Hellrune Carver instead. I was ignoring Dracarris as a pet weapon and passed over it!

…and ur welcome once more!
Ngl, Dracarris was a weapon I slept on until now as well.

Glad I gave it a try + it did fit this builds needs almost perfectly.