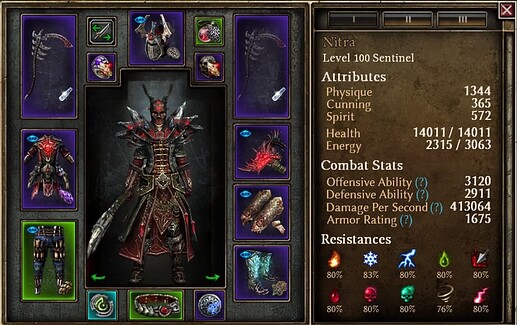 Stats with permabuffs only, DPS for Eye of Reckoning

First of all, I swear to Korvaak I came up with this independently of @fordprefect’s 2H Vitality EoR build he posted before me. I had been working on this myself for a while, as I really wanted to make a good build out of the Mythical Death’s Reach weapon, but he beat me to the punch. However, this build came with some personal benchmarks for me-- it’s my fastest Ravager kill to date, as well as my first Crate kill with a squishy melee character-- so I didn’t have the heart to just scrap it all. More to the point, some of my gear and devotion choices are different from his, so I want to talk about those.

Hopefully all that makes it different enough that I am not stepping on toes with this! Or more accurately- spinning on toes, I guess.

Again, requisite shoutout to Ford for also building on the same concept. I recommend you go and check out his version of the build as well.

I think at the very least, it’s safe to say that 2H vitality EoR is alive and well now, lol

I can suggest more points in spirit for even more damage and energy regen (although it’s probably fine). And I would fit Sanctified bone, racial against chtonics and undead. These bastards tend to be crazy resistant against vitality damage. Btw sheet damage is really nice.

And yeah for sure, spirit dump is always an option- especially for those in the “DA is optional” camp

I chose to boost physique though, as health was a bit low for my comfort. Energy regen is adequate, I have one Arcanum Dust augment as well that helps with that. The Runestone was primarily for resists (it was a bit hard to find elemental/aether elsewhere) but you are certainly right, Sanctified Bone would be the preferred option for vit-resistant enemies alone.

nice build as always!
what do you think of the biggest difference with your build compared to ford’s, in terms of performance.

Nice, an offensive version and good job killing Crate with it, I can’t manage that combat

Nice, an offensive version and good job killing Crate with it, I can’t manage that combat

It was… an interesting challenge on this one, that’s for sure

nice build as always!
what do you think of the biggest difference with your build compared to ford’s, in terms of performance.

As Ford alluded to, mine will kill quicker but his has better phys res and health (and also the better build name, but you didn’t hear that from me

), so just pick the version that you like best 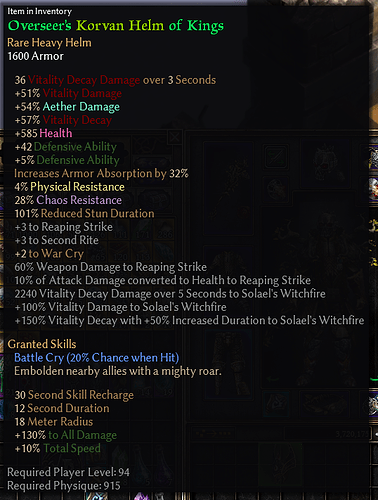 Korvan_Helm538×711 289 KB
Just found that Helmet on HC and were looking for some Build to fit it in.
Might this work or do I need the Chaos → Vitality converison?
Armor on that build looks quite low but would get buffed with my helmet and phys res looks very decent anyways.
Should I give it a try and level a Sentinel for HC?
Getting bored with my Warder these days and are looking for some new and fun Char to build.
Torzini January 8, 2022, 8:16am #8

You’ll still be fine without the chaos > vit conversion, it’s just a nice damage bonus and nothing more.

I am not a HC player, but theoretically this build should be totally fine for HC campaign, as long as you can do decent damage with your gear. I wouldn’t recommend trying anything harder than Ravager though, unless you enjoy living on the wild side with risk of dying. You are correct that armor is low, so physical hitters may be scary.

Spin2win characters are fun for sure, if that’s a style you’re looking for.

Had a lot of fun with 2H Cyclone in PoE years ago until my Char died offscreen like all my HC chars in PoE.
Spinning around is definitely a funny playstyle, still have to look for a bunch of gear pieces with my warder first and get the other Lokarr pieces for the Sentinel.
I enjoyed living on the wild side far too often which led to a little more careful playstyle but one never gets rid of good old habits xD

hi. Thanks for wonderful build.
I have a experience that complete whole campaign just once.
And I just decide to start fresh new game with this build.
I have no items for damage conversion, so I’m gonna convert my damages to acid first.
After farming some items, I’ll change my skills for vitality.

in your opinion, would that work?

In Malmouth on Normal you can start playing Vitality EoR if you farm these two weapons: Blugrug They get Fire / Lightning conversion covered and Phys you get from prefixes and components.

wow, great build
can u pls give a noobie a leveling guide which skills to pick first?

If you are fairly new to the game I would check if you can access the mentioned gear or think of some substitutes first.
Some of the Items are pretty Endgame, as the Hood which you have to go for Lokarr’s secret quest and Farm the Hero Mobs inside the dungeon with medium drop chance.
The green items seem to be rolled as best fitting prefix/suffix combination, which makes it really hard to get all of the three mentioned with the given stats, although they are no double rares.
Keep in mind you have to be hostile with Barrowholm to be able to farm the Nemesis Boss for the trousers.
So I’d advice to think about if you can get most of the gear or good substitutes before leveling and then realizing you wont get to the end.

I saw this build and decided to try it out.
I’m in the middle of going through SR in order to farm for better gear.

I really like all the procs from my gear, but i don’t realy know much they help with dps and survival.
I know i must change medal and helmet.

What do you think about Voidwalker Footpads? Ill omens is probably better, but im curious.

Have you had the chance to take it into crucible?

If so how did it perform?

How did you get the rotgheist set? i got the chest in Ancient grove and I was like, “Oh, you can get this set in Ugdenbog…”, then I farm almost 80 totem in the whole Ugdenbog, gloomwald, and ancient grove and didnt get any of this set

your build is good but you will have a hard time past SR 60, you need more dmg (ele to vit conversion at least) as the enemies past SR 60+ hit like a fckin proton bombardment at speed of light (that fckin mad queen& gargabol physical dmg is insane, 25k+ dmg even if i have 30% phys resist)

How did you get the rotgheist set?

It’s a random drop. Farm what you get the most legendaries from. And blueprints because you might then craft Rotgheist helmets and transmute them into other pieces of the set.

Oh, and you may also try to play (SR for example) without going to main menu / restarting your game for more diverse loot.

Oh, and you may also try to play (SR for example) without going to main menu / restarting your game for more diverse loot.

Thank you, I didn’t know that… I’m farming SR75-76 rn as I only lack the shoulder part from the build, I used korvan pauldrons for ele to vit conversion… also cough cough…can you suggest another class build that is not prone to one shot? i’m noob and keep getting one-shotted haha