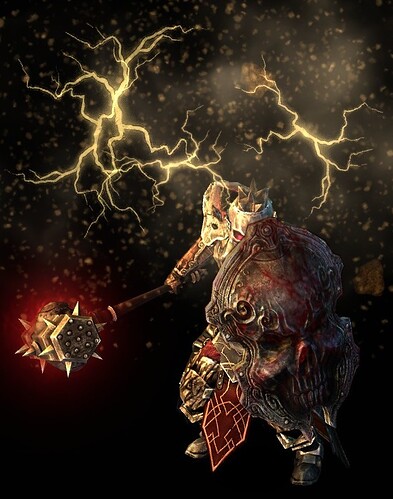 Good work and great times you got

Thanks, I don’t chase / grind timers but since they happened to be good why not use them for marketing purposes.

Btw you busted me when I was editing it secretly in a different thread. I couldn’t message you back because your profile is private. Consider making it public not only for private messages but I’m sure more players than just me check out guides from builders profiles.

P.P.S. Why not using Mark of the Voracious One to hardcap Shattering Smash (and give it lifesteal) and leave 24/16 RF?

P.P.S. Why not using Mark of the Voracious One to hardcap Shattering Smash (and give it lifesteal) and leave 24/16 RF?

That’s a good alternative. It crossed my mind but the medal I’m using is also good. Perhaps I can mention it somewhere in the OP.

Yes, turns out when you have the following leeches

You don’t need it. Although I did use ADCTH pot in farma fights just in case but it didn’t feel necessary.

Btw against Ravager / Callagdra the build felt as expected but against Crate it felt surprisingly tanky.
You know, standing near many crates and not dying instantly. Maybe

could be killed faster.

I wonder if it’s not the

and others).
I’m a strong

believer, even more so after testing that they stack properly with each other.

It’s not the first time when I confuse the two. Necrotic Edge sounds more leechy to me.

Hmm… since the medal gets additional +1 to RF in 1.1.9.7, I could drop the Gargabol, still be able to have 24 RF and maximum number of charges and wear Combustion Band for some more RR

or maybe some other ring

Possible to kill mogdrogen with this?

Sure, Mog is nothing in comparison to 3 bosses in the title.

Of course to experienced players. We don’t want to take away the feeling of achievement new / casual player have after beating him.

Not this. As a lore character, I meant.

How do I get Kymon’s Conduit? The Kymon’s Chosen refuses to ally with necromancer.

Would have to get it with another character and then put it in the transfer stash.

Oh… I think not selecting Necro till after you meed and join Kymon’s should work? @Gnomish_Inquisition

Anyway, here’s a fix for the character in the OP if you have such problem Oppressor, Level 100 (GD 1.1.9.7) - Grim Dawn Build Calculator

There always away to fix such a problem.

Would have to get it with another character and then put it in the transfer stash.

augments cannot be transferred, they are soulbound

not selecting Necro till after you meed and join Kymon’s should work? @Gnomish_Inquisition

correct, if you hold on with Necro class choice until after joining Kymon Chosen in homestead you can stay, and even rejoin in next difficulty
if/when at a point you switch to Vigil you cant’ join back again tho

so you can side with kymon, ally again on Elite, grind Revered, buy stockpile of augments and put in stash, and then join Vigil on Ultimate and get their stuff
potential useful info for future use @peng

Ah, didn’t realise it was an augment. Yeah, those can’t go in the transfer stash.