Disclaimer: I’m a terrible build maker. I play. I have fun. I am in awe of people that make builds to tackle Nemesis, let alone Celestials. Let that statement guide any comments you may have.

Very rarely do I post build stuff because of ahemSEEABOVEDISCLAIMERahem. I’m basically a charlatan at best and at worst I’m going to give terrible advice to newbies and regret it later.

That said, For the past umpteen months I’ve been on-off building towards a working ‘apostate’ that had two parameters. 1) Must use Korvaak and Rattosh devotions. 2) Can’t join Kymon’s Chosen or the Order of Death’s Vigil (that one is minor and most certainly thematic.) It’s also HC.

After finally reaching 94 (again, on and off again playing). And through level 100 and way too many hours in Grim Tools, this is the build I’ve been playing so far. I’ve only “pushed” (contain the laughter) to SR 35 and I don’t do crucible so no idea.

Originally I’d done it with a different set of rings but I didn’t have those rings so got a wild hair up my butt and went with these and it’s been surprisingly affective.

Also, the build wasn’t developed with specific green affixes, so those can probably be interchangeable based on resistance/defense/offense needs. I just went with whatever I had.

So that said, I’d love to hear everyone’s thoughts on it. I’d love it if someone who is a MUCH better pilot then I am might feel like testing it to see what it’s really worth. I will continue to test, of course, but I’m old, grumpy and fine-motor-skill challenged so I don’t know if I’ll get the mileage out of it some of you young whipper-snappers could.

END GOAL: I don’t really care if it gets to be able to do super duper celestial super boss kewlness factor braggin’ rights but I WOULD like to try to optimize it as far as it CAN go. Thanks.

EDIT: Had the wrong damn link in it. The original one was the way I theorycrafted it. This is the build I’m currently playing as it seemed to work better actually (and I had these two rings.) 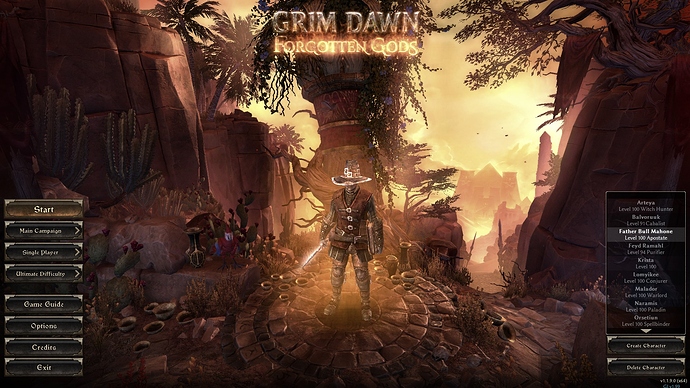 why are you overcapping deadly aim, and not overcapping inquisitor seal? And no mark of torment? Foul erruption only works if a monster gets killed by ravenous earth, not very likely on this build. No slow res, not fun on channeling builds. Especially not with like 120% casting speed.

Yes, casting speed is an issue. I realize that. How would you go about maximizing it keeping in mind the thematic guidelines? NOT HOW WOULD YOU MAXIMIZE IT FOR TAKING OUT THE HIGHEST LEVEL CONTENT OF THE GAME. I’m more interested in optimizing this as a build, using FoL. Using Korvaak/Rattosh devotions. So with that in mind what tweaks to get cast/attack up? Different gear? Are there better skills for this? I know gloves have cast/att speed on them (might current one’s do not) so would you recommend a specific pair?

I overcapped Deadly Aim to try to boost my OA higher. I think I can either take out 2 points or wait for 1 more I still have to get to take it to it’s final point.

What are good sources of Slow Res?

I had some fun with your build and came up with this as some suggestions:

The main takeaway is that you can swap up the gloves for most anything with cast speed and boots for something with slow resistance. Misc greens or faction gear can do. Rovers have a cast speed gloves.

I read you want to focus on FoI…and if so, you’ll want to max it and that will need more energy regen. FoI has built-in DA reduction which effectively means you have +OA relatively. (It also makes a portion of the Korvaak proc redundant). It may even require Ectoplasm components instead of Mark of Illusion. And although I swapped out the Arcane Spark as a suggestion…I’d make sure that it is really not needed before removing it.

-I tweaked the devotion slightly for more energy regen/crit/stun resist. Finding devotion cast speed seemed to far away from your intended idea, so I avoided too big of a change.

-your rings are fine, but I thought I’d suggest a couple that could also be a good and fun fit.

This style of building doesnt follow conventional methodologies. The focus on this kind of build is theme, and the original idea being one wherein the character must show devotion to 2 opposing deities (IE; 2 tier 3 Devotions of opposing lore). The choices made with this build are based on these guidelines so when looking at it you have to realize its not a normal build and won’t follow normal guidelines/criteria.

Thanks for throwing this in. 'preciate it, along with the explanations.

boots for something with slow resistance.

I had thrown some different gloves on in that second link I posted. I completely missed the Magelord boots, that’s a great call! Perfect. And I’m sure I more than likely have a pair in my stash. I actually haven’t yet had an issue with energy, so I’m going to swap in the boots, test, see how it goes and then if there are energy problems I’ll continue to merge and tweak with some of your suggestions (components and devotion ideas.)

I will say so far the damage is obviously lacking and things take fairly long to kill but with all the ADCtH it’s very tanky. But I also knew those secondary issues will become a problem as I start to push past campaign stuff, which I’m just about to do starting the climb from SR 35, so I wanted to get some ideas knowing I’d been staring at this thing for too long and know that:

Disclaimer: I’m a terrible build maker. I play. I have fun. I am in awe of people that make builds to tackle Nemesis, let alone Celestials. Let that statement guide any comments you may have.

I’m fully aware of this limitation.

Spot on, mate. I figured you’d probably see this having been part of that original thread.

Yeah man i am loving seeing what you guys are coming up with! Thats where my largest amount of inspiration in how i play the game comes from, the fact that there are people who play this game in a different, unconventional way. If I was the only person playing like that it wouldnt be nearly as interesting. Its great to see others in the community playing that way as well, i wish there was more of it.

I did these tweaks with Hammyhamsters suggestion (basically ditching ill omen to have less buttons to care about) and some minor skill and component/augment changes.
https://www.grimtools.com/calc/eVLwBAM2

This style of building doesnt follow conventional methodologies. The focus on this kind of build is theme, and the original idea being one wherein the character must show devotion to 2 opposing deities

I know that, and I did not criticize that idea nor the devotions. I only said/asked about skill choices and not caring about getting casting speed or slow res. Or was it also part of the build theme to be as slow as possible regarding casting?

Radaggan is not a bad set but a clunky one due to lack of % speed. I had an idea of Radaggan Deceiver with Acid Purge quite some time ago, but needless to say I scraped it because of 0% casting speed.

I made a Cabalist just a couple of days ago, and while it plays rather nicely, it still suffers of low (~128%) casting speed. It has 2 skills on low cooldown and 2 debuffs which you need to cast constanlty.

I’m surprised no one suggested Radaggan to receive some % total speed or at least some % CS.

I did these tweaks with Hammyhamsters suggestion (basically ditching ill omen to have less buttons to care about) and some minor skill and component/augment changes.
https://www.grimtools.com/calc/eVLwBAM2

Oh very cool. Nice. Gonna add these ideas into the mix. Once I’ve had a chance to see how some things work I may have a ton more questions. Thanks for looking at this. Did you have a chance to look at my second link. After you’re intuition comment about cast speed I did some gear tweaks and skill tweaks. Got my CS up too around 160. I think I was flocking o. To some of your ideas as well. I realized I had too many points in WoP and should mainly use that to proc devotions for this build. So I shuffled them into other skills like seal.

One question. You mentioned Mark of Torment. With the life leech I had I decide to use the points elsewhere BUT is this for times when I get CC as an emergency backup?

I’m surprised no one suggested Radaggan to receive some % total speed or at least some % CS.