[Feedback] The disparity between the power of monster-infrequent amulets

Gonna be awkward since I’m on mobile… 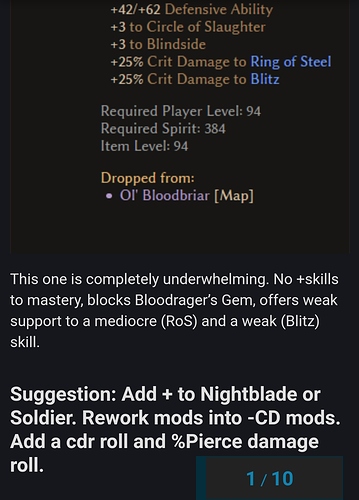 Agree and disagree. In conjunction with other MIs, I don’t think a -Cooldown mod is very likely. Further, the crit damage does matter because Blindside’s IT/CoS’s bleed benefit from it enormously. If it needs it, I’d rather see a flat IT/Bleed mod to the relevant skills in addition to the crit damage.

As to the general state of things, yes. A MI amulet will more or less never compete with Legendary variants without +skills or -resists…or both. Competition with Legendary sets and/or procs is something MI amulets, rings, helmets, headpieces, shoulders, and chestpieces still struggle with.

E: to this end, I see no problem with Ellena’s, only a success.

I think -20% OA to deadly aim would be funnier seeing what was done with oathbreaker.

Or maybe I dunno address the common point of the issue.

The only good way to run physical Blitz also takes up the amulet slot. I don’t see a situation where I’d break Markovian’s set to take the thorn. Maybe on a fire Blitz build with Justiciar, but that sounds like a complete meme build.

I think you make some good points @mad_lee, though I do have a question
You point out that in some builds that these items are too strong, what about other builds? Do these items make those skills strong? Or are they completly useless? Now don’t get me wrong I am not saying anything you point is wrong, I just think that for an item to be OP I would be able to use it in ANY build and I will beat all super bosses with it! Making a already good build stronger or easier to use I hardly think it needs to be changed, of course I am not saying all these items are fine. Case and point

This one… I find it useles, so many better atm.

Zaria’s pet amulet is disgustingly OP for Lightning Beastcaller’s Conjurers (for the Briarthorn side) and underwhelming on the Hellhound’s side. Beastcaller’s Set is miles better in terms of pet stats and usability than Lost Souls - heck, the Call of the Beast on the Helm alone is better than the whole set of Lost Souls. Hilariously enough, Lost Souls set blocks the amulet while the Beastcaller’s Set does not, so you can get 1.65 Total Damage to 2 Briarthorns, but 2 Hellhounds do not get that luxury. Besides, for a Hellhound focused build, Sovereign Ruby beats this amulet any day as it has the full conversion to Fire, the sweet proc, and 6% CDR.

In conclusion, Zaria’s amulet is a combination of both a really good modifier for Briarthorns and an underwhelming modifier for Hellhounds due to double Briarthorns having access to it, but double Hellhounds do not. I can’t say I know how you can improve it on the Hellhound’s side, as the amulet has heavy competition between completing Lost Souls and Sovereign Ruby.

I want to give Crate special thanks for improving the Death-Watcher Pendant. Having permanent Call of the Grave uptime is sweet, and I love taking advantage of that, especially Bargoll’s Core with 15% Physical Resistance + 100% Health Regeneration when Call of the Grave is active.

The problem I have with pet stuff is there is so little! Now before people jump on my back and place however many links to pet items let me explain a little. Not including sets, if you look at all the pet items bar a few blue, the amount of bonuses for pets are either 1 or 2… sometimes 3! Like I said the few blue that have many stats eg 4 or 5 bonuses, they generally rival a set item and so you are left with little to no option for your pet build. The greens I have seen and have/found over all my play time have 2 maybe and very rare 3 bonuses to pets, and when it’s a 3rd it’s usally a conversion. Tho conversions are ok, in the green market they dominate, 100% conversion, + conversion damage and a resistant of some sort. None of which you would use unless you building around that. I just want to see more options for pets.

You point out that in some builds that these items are too strong, what about other builds? Do these items make those skills strong? Or are they completly useless? Now don’t get me wrong I am not saying anything you point is wrong, I just think that for an item to be OP I would be able to use it in ANY build and I will beat all super bosses with it! Making a already good build stronger or easier to use I hardly think it needs to be changed, of course I am not saying all these items are fine. Case and point

Elena makes any cold Nighblade incredibly strong. Obviously Pierce Nightblades won’t benefit from it. I am not sure what’s your question is tho.

I do disagree somewhat with the OP. I don’t see all of these amulet as endgame options, as quite a few come from very accessible Bosses and are great levelling/beginner options. Amulets which are harder for new players to access like Vilgazor and Elena are more likely to be endgame worthy, so I agree for those instances.

If they were to become endgame option, then sure fitting in +1 All skill to a mastery would make sense (and reduce respective skill bonus as payment).

I think Vilgazor could use +bonus to Ulzuin’s chosen for Grenado, and something more for RoS, total damage modified or -CD.

Elena Necklace - Just an idea but why not remove the RR to VoS and put flat reduced res on Star Pact (~32?). Inquisitor excluded and liberates devotion point for Spellbreakers. 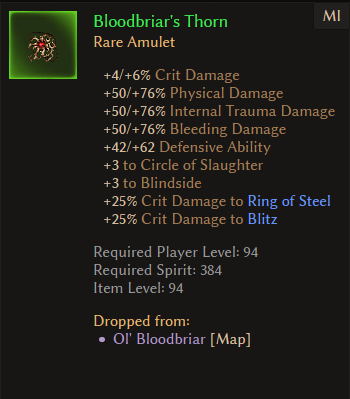 This one is completely underwhelming. No +skills to mastery, blocks Bloodrager’s Gem, offers weak support to a mediocre (RoS) and a weak (Blitz) skill.

I like the amulet and it’s mod, physical builds benefit greatly from crit. Sure it could use +1 all to a mastery to be more end game comparable, but it’s strong for levelling/beginners.

I am not sure about Blitz being weak anymore. Imo, it is now better than Forcewave for levelling and I think it has potential at endgame too, I just have not got around to testing it. Have you?

I like the amulet and it’s mod, physical builds benefit greatly from crit.

it’s weaker than most of medals.

I can’t see a problem with it, outside useless mod for HoG. It’s niche amulet for acid RF, that somehow has found +to skills, and can afford this amulet. About 2x Misery>Full Venomblade - it’s a problem of Venomblade and skill distibution there.

Mostly agree with the OP. I haven’t played a lot with “new” MI amulets, however, there is one little thing: 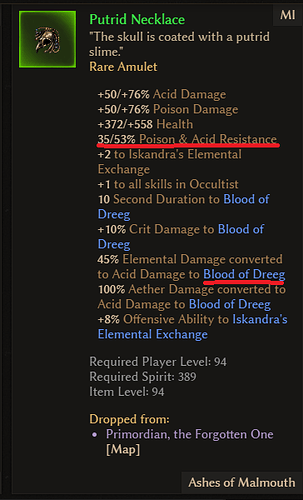 Cold is already spoiled on flat damage. In a similar vein to the recent Spellbreaker waistguard change why does Ellena’s have flat cold among all the other things?

Cold infiltrator is squishy and overall a glass canon, so I think reduce flat dmg of Ellena a little wont hurt much, also may be +5% physic res to Starpact?

Why do we need to slap phys res on everything? The necklace already does plenty. With the frequency that SS hits at the frostburn bonus to Star Pact (and the +2 which means even more frostburn) is approaching the functionality of flat damage unless someone feels the need to jump up and state SS doesn’t have enough sustain so flat vs dot actually matters a ton.

Because even with mirror, Spellbreaker is the most squishy class ever, usually gets oneshot, and with the ultra nerf of SS because of its brother Infitrator, the class is much more dead, so a little buff for its tankiness wont hurt.

The demise of spellbreaker is greatly exaggerated, I see you’ve bought into the usual forum nonsense narrative trending towards extremes. The overtuned Morg set got pushed towards its proper place and nightfall got a slight nerf, the end. What people seem especially eager to ignore is that the build already operated with some MIs by default and this discussion itself is about MIs. Items which offer a variety of build options due to the malleable nature of stats they may present with.

Did the forum’s adored shake and bake build get hamstrung? Yes and I applauded that. Do you need better gear now to run around with a full spirit dump to push sub 5? Good.

For the love of ulgrim’s soup we have viable OFF breakers that can demolish SR. I can’t follow the line of reasoning unless dead means moderately less accessible and no longer spoon fed godlike power.

Disagree with retal amulet. It’s very good in terms of mods, + skills, you can argue for reprisal/ gaze but even before testing feedback, acid retal had 0 issues making those unlike fire or lightning.

I was actually testing it as I was writing this feedback. Even posted a relevant build. And Ronaprax amulet seems to be tailor made for that build. However, I ended up dropping it because it because it loses to every other option. Pestilence of Dreeg, for example is a much much stronger offensive option.

Because even with mirror, Spellbreaker is the most squishy class ever, usually gets oneshot, and with the ultra nerf of SS because of its brother Infitrator, the class is much more dead, so a little buff for its tankiness wont hurt.

By that reasoning just make them HC and they’ll delete themselves.

This is an amulet slot, so it means nothing to OFF set. Tell me another build of SS demolish SR or Cru easily? Like Elementalist, it shines only because of Cyclone set.

By all means move the goalpost from spellbreaker in general to SS. There have been valid spellbreaker builds using shadow strike for quite a while. The forum regulars just saw fit to disregard such builds on account of their MI usage. Consider the build making bias where fewer players so much as attempt a spellbreaker build because the forum narrative has conditioned them to worship the infiltrator overlord and eschew greens at every turn.

There have been 6min and lower crucible builds for spellbreaker since the dawn of FG. It would clear things up greatly if your metric places anything beyond 5:30 as literally unplayable but short of that I don’t see the foundation for such claims as spellbreaker being dead or otherwise crippled.