I am noticing a pattern: every changelog is the largest changelog ever. 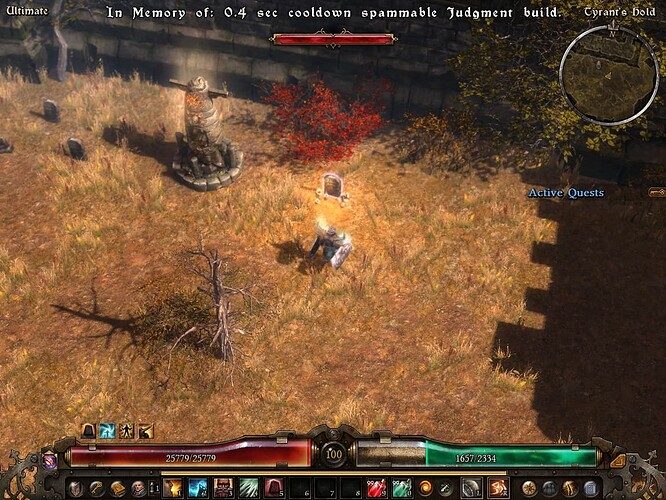 Not escaped my notice, either.

That graveyard seems pretty small if it’s meant to be for the builds Zantai has killed over the years.

Actually, I know only one really killed build. All other is rebalance, or fix overperformance, or unintentional changes.

Everything seems to be MOAR. MOAR Critical damage. MOAR Attack Speed. Unbelievable. Is it time to play with Superbosses as Nemesis die within seconds?

Thanks for keeping my build strong Devs!!! Thank you very very much. It is a pleasure

Played a bit (you can check it on Twitch). This Patch is really good. Additional to this… The Game feels a little bit faster!

Is there any chance we will be able to change the character select background at some point? My favorits one is from the vanilla game and I’d love to see that one again. Titan Quest implemented this feature a while ago and it’s great.

Thanks very much for such a massive patch and amazing work as always.

Technically something like this is still viable, though at max it only 1s cd now

There is a guide somewhere on the forums for that, here it is. Scroll down till you see the files posted by Gerda, it’s really simple to do.

I have linked two ZIP files with which anyone who is interested can replace the FG main menu. Simply copy the content of the preferred ZIP file to your Grim Dawn installation directory. There is no need to make a tutorial for this kind of modding; it’s just a copy&paste method. Which file I copied can anyone see in the ZIP file. The only changes I made are removing the FG logo as it interferes with the AoM logo. The FG logo particle effect is still there, but it doesn’t bother too much (or …

Thanks for the patch, a lot of good changes came out of it. But there were some strange ones as well.

Health regen nerf was sure weird but at least it was included in patch notes and Z made some explaining on the topic. But for me personally there was some more weird stuff, like this:

I’ve made several feedback topics on lightning melee, and a lot of stuff was fixed with Wind Devil buffs and some item buffs. But i also made a topic on Upheaval: how it is absolutely broken with pass through because it doesnt have internal cd and how it is useless in everything else.

So this Savagery mod on Ultos set, i assume, was added to help melee make use of the skill. Of course, with so many more chances to trigger Upheaval on a single hit (and trigger it multiple times) it went from useless to broken. 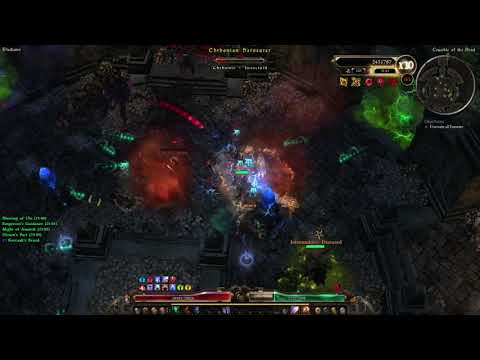 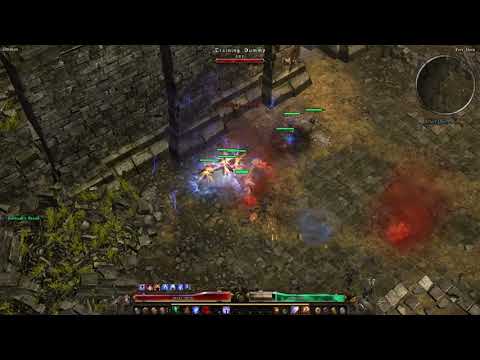 Its kinda bittersweet. On one hand i appreciate the desire to buff melee. On the other this kind of a change, sneaked in at the last moment, untested, not only locks the skill viability behind very certain gear. It turns smth from obviously useless into obviously broken which is bound to be nerfed.

I reiterate on the suggestion to introduce internal cd to Upheaval to avoid multiple trigger abuse.

i dont think Upheaval is the only “problem” here. The atk arc and maximum target mod with this set is ridiculous OP. Look at the video you had, even without the Upheaval animation proc, monsters died way too fast with just normal Savagery spam (basically 3-4x faster than normal- and for that, 3-4x more times life leech, so you cant die). Most of others AA builds, they needed to rely on WPS or other auto-sources of damage (like multiples BS or Guardians to not interupt AA) for more AoE. But now you dont need to. If this is the way of buffing lightning melee only, which only “lightning AA” can get multiple targets with mods (like Stormheart/ Crystallium/ Ultos), then i’m against it. And give Upheaval any internal CD will just make other builds (that not Ultos) using this skill even worse, cuz maybe Upheaval is the way (sometimes the only way) of getting more AOE for them.

You only need 0.2 sec internal cd to prevent multiple procs. It wont affect the builds that use Upheaval “normally” in any way.

The Savagery arc is a very big buff but without Upheaval in doesn’t make the build OP, no. Full Ultos set blocks the WPS amulet for Archon. But in general i’m also against the addition of the arc to AA on specific gear. It restricts the way you should play with certain skill if you want a strong build.

They both contribute for the op-part of the build. If you delete the arc and multiple targets and keep the Upheaval, then your build wont be OP either. Without the arc mod to Sava, even a build combine with weapon specially support for lightning Sava like Stormreaver AND a dedicated set that buff a lot to Upheaval like Veilkeeper, we just have a “good” build, not OP. Did i miss some other builds that trigger multiple Upheaval to the point that it can clear Cru for less than 4 mins or kill things fast in SR 90? I only saw passthrough VoS build thay abuse it, and even then they are good, not that kind of OP. Even then the biggest part is passthrough- not Upheaval. Cuz passthrough Primal Strike build can be the same, or even better. Why other AA builds can only get some %dam, small flat, a few skill bonus, and on the other hand lightning AA (and the “new” Cadence, which i tried pierce/cold/physic/aether/chaos versions- they are all very good with new patch) can get more and more multiple targets??

The OP-ness on the build comes from very high chance of (multiple) Upheaval procs on a single hit. If you try the same full Ultos with the arc and regular WPS it won’t be as fast. Take it from someone who tested this platform way too many times.

I’m not sure it’s a good place to discuss the details of some build.

No way to add an option to natively customize font?

Fonts Switcher Download: Executable: fonts_switcher.zip (527.9 KB) Autohotkey Source File: fonts_switcher_source.zip (10.8 KB) What it do?: It automates the process of trying out different fonts in GD. This tool is meant to be used in conjunction with @stargater 's (and his alt account: @shaice) fonts he has made available here: [English font] GD clear fonts + london gothic fonts OR normal clean fonts versions I highly recommend taking a browse thru his thread so you more fully unders…