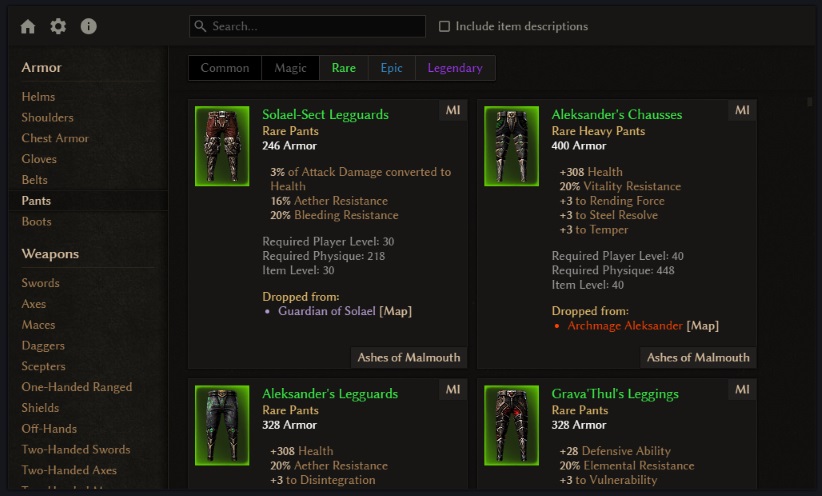 This tool is built automatically from game resources.

I have a patreon account now, so you can support me there if you want: https://www.patreon.com/dammitt

Feel free to post any questions, suggestions and bug reports.

If you are interested in translating the tool, please refer to this thread.

Dang that’s a lot of stuff that I didn’t know existed. O_o

There’s a lot of unobtainable stuff in there that also isn’t on Shalie’s db. Mostly higher-level stuff.

This is pretty awesome!

On a sidenote, Crate really should add more Lightning Medals, be it Rare or Epic.

There’s a lot of unobtainable stuff in there that also isn’t on Shalie’s db. Mostly higher-level stuff.

Well, all the stuff in my db is “obtainable” in game, but I intentionally put this word in quotes to emphasize the fact that it can be obtained in game, because all the items are in loot tables of some mobs / loot containers that are actually spawned by some proxies or spawned via quests/events, but there’s no way of knowing if an item can actually drop in current game state (considering player level cap / currently available areas / quests / events). I think my GD resources crawler is pretty good at finding “obtainable items”, but there are some limitations that it can’t overcome, like knowing which quests/events can be currently triggered or which proxies are used, so it assumes that all of them are needed. Of course it’s not perfect - there are at least 2 items which my crawler finds, but I’m pretty sure these are broken, so they are implicitly excluded from the db.

there was a lot of high-level epics included in hotfix 2.

Wasn’t faulting you for anything, I think it’s a great tool and honestly I wasn’t far off myself from building something similar. Just giving a bit of a spoiler warning.

A great idea, but I would appreciate if you took Shalie’s approach to omitting items that are not available in the current state of the game.

A great idea, but I would appreciate if you took Shalie’s approach to omitting items that are not available in the current state of the game.

To be honest, I wanted to do exactly that, but if I ignore all items spawned by quests, this means that not only quest items but also all quest rewards will be excluded, because there’s no way to differentiate available quests from unavailable ones

Is it OK if I only remove quest items which aren’t yet in the game and keep all quest rewards?

I suppose the quest rewards won’t spoil anything. Sure.

I’ve completely excluded all quest items from the database.

Nice!
Took me a while to notice the rarity filter though, upper right corner for anyone else looking

Incredible stuff, Dammitt! The epics pool will soon rival even that of Titan Quest at this rate.

And speaking of epics, glad to see we’re getting more precious, precious sets. I do wonder though why this one has not yet been implemented (as in, onto Shalie’s DB and attainable at level 70)… aside from looking complete* - with artwork and all - it looks freaking badass! *I can only assume this one is still being balanced against similarly-leveled legendaries, etc… though you could also do with making it so that all four pieces of the set read either Flamekeeper’s or Flame Keeper’s (rather than interchanging between the two as is the situation currently).

Updated to B28. Please note that although there are only couple new items, some items from the previous build (b27h2) have been updated, updates to existing items aren’t tracked in the database atm. Quest items are still hidden for now.
P.S. blueprints section was updated as well.

Great thanks for the update at work i can at least see the changes made to the items.

This item is in the database and it’s been there for a while.

No update for B28 Hotfix2, because it only includes nerf to pet damage which is not shown in skill descriptions.

That’s fantastic. Thanks for the update. Now I can take a look at all the new legendaries and decide which type of character I want to play.

Updated to B29 Hotfix 1. I bet there will be hotfix 2 before the end of the year, because skills on a bunch of new items/sets are still broken.

I’m having trouble accessing it. I’m unable to run both the 32 and 64 bit versions for some reason. I run the .exe and nothing happens. I’m not sure what I’m doing wrong - could you help me out?