However, I am trying already for quite some time to get the combination “Subjugator’s … of the Wild” for a few pet MIs. I would need it for one of my characters.
But after an estimated 300 runs I did not find even one. “of the Wild” dropped several times, but always with prefixes that are not related to pets and that I don’t need.

Do you think the chances are still too low to get the mentioned combination? Sometimes I feel like giving up. I had hopes that after the MI patch certain combinations would actually drop after some time. But so far, I cannot confirm that.
On top of that, both of the mentioned affixes are pet-related, so I assumed they have a higher likelihood to drop. And “Subjugator’s” is a magical prefix, so I am not even asking for a double rare MI.

Any other suggestions on how to obtain said MIs?

Any other suggestions on how to obtain said MIs?

I would need it for one of my characters.

You do not NEED it, you WANT it. Totally different issue

I haven’t done the math but 300 runs (how many copies of a particular item X did you farm?)
don’t seem enough to demand a particular prefix + suffix combination even when it’s not double rare
due to number of prefixes / suffixes. I wonder whether pets items have higher % for pet affixes

diversity of the sake of diversity, probably.

Would you rather have them drop with pet affixes 100% of the time but at 1% of current drop rate? It would hurt SSF play tons, where often the base item is good enough to wear. Or extra resistances etc.

I would rather prefer to switch them from green variables to a purple item with fixed stats (or several versions of same, like Inashkor head .
Take the Mythical Heart of the Sand King. It took me 50 runs to get it but in the end i know this is the item i need with bonuses i need instead of irregular crap which is 99% of prefix/suffixes MI roll with.
For example, i am looking for Bloodsworn Codex MI for the double Briarthorns’ build. Why on earth do i want to have it without pet stats on prefix/suffix? Will somebody really pick Inquisitor or Soldier or Necromancer as second Master for build concentrating on double Briarthorns?

On second thought, i understand the idea behind it, to add thrill of excitement when hunting for items and moment of incredible joy when you find something useful, to make those MI with suitable properties all the more valuable, etc.
Maybe i am too harsh on this, but i can understand the OP pain here

For example, i am looking for Bloodsworn Codex MI for the double Briarthorns’ build. Why on earth do i want to have it without pet stats on prefix/suffix?

Not that hard to get double pet affixes on that one, I have plenty.

I rather use any such off-hand than no one at all.

Why not? Game is about creativity. Pet vindicators and Ritualists are fun… pet warder idk

The feelings when you get a “Necromancer’s” pet weapon “of Binding” and the bonus is for Reaping Strike instead of something pet builds could use. :feelsbadman:

In cases where the MI is leagues above any Legendary item, having just one pet affix makes the item worth using if you’re running SSF. If you want to stretch the limits, that’s what GDStash is for.

I have been mostly playing Pet builds and a combination of prefix and suffix for pets landing on the same pet item is insanely rare. I have seen only two so far and both are Houndmaster’s Bloodsworn Codex of Caged Souls. I’m 100% sure of it because i always keep valuable stuff like that in my transfer stash. I have played for more than 500 hours over the last few months so i had plenty of time to find stuff like that but they just don’t drop that easily. You will see plenty of singular rolls (either prefix or suffix) but getting both is not something you should strive for. It demands too much luck.

I was hoping that after the patch, the drop chances for affixes that are related to the innate abilities of the respective MI would have increased. That is at least what the patch notes say.

But based on my experience, playing the game in real life, the combination I mentioned, “Subjugator’s … of the Wild”, for example, is just not dropping.
I had hoped that combinations like that would drop at least once in a while, every 300 attempts maybe. But it is just not happening.

Again, “Subjugator’s” is a magical prefix, so I am explicitly not asking for double rare MIs.
To be honest, it is just frustrating. And I also don’t like using GDStash, since I consider it to be cheating. But then, if the chances for those combinations are really THAT low, then maybe I don’t have any other choice, sadly.

“Of the wild” can not spawn on off-hands

I have several “subjugators of the wild” items.

I can perhaps farm 100 or so of one MI, and give you statistics - in my experience, when say a Bloodsword off-hand drops with a rare affix, it is way more likely to be a pet affix than say “sandstorm” or “of the orcale” etc.

So, tell me which MI you want me to farm and I can provide some data

Ulvar, I am honestly not sure what you are talking about. I play this game already for years.
And the combination I mentioned is in fact not dropping often. It is very rare, too rare.
Others here in the thread confirmed that.
If you want to know the MIs I am talking about, I will tell you: Zaria’s Pendant amulet, 2 Bloodsworn Signet rings, Wendigo Gaze medal, Lunal’Valgoth’s Girdle.
So, technically I would need a total of 5 MIs with the said affix combination. But given how rare it is, realistically and practically, I will never get it.

If you want to know the MIs I am talking about, I will tell you: Zaria’s Pendant amulet, 2 Bloodsworn Signet rings, Wendigo Gaze medal, Lunal’Valgoth’s Girdle.
So, technically I would need a total of 5 MIs with the said affix combination. But given how rare it is, realistically and practically, I will never get it.

Ok, I can farm for one of them. I already have several of them but I can do it again just for science

Think I will go with Bloodsworn rings, because they can be shopped so its fastest way to “get” 100 of them (its like 50 vendor resets, will take about 1 hours only).

Again, you do not need them, you want them. A completely different issue!

Where can the Bloodsworn Signets be shopped?

Right now I cannot go beyond SR 35, so I actually need them to enhance performance.
The current capacities are just not enough.

Perhaps if you share your current build, and we can give some input?

My experience with pet builds are that even with scrap items, you can do ultimate SR65-66 pretty easily.

You have played this game for years and don’t know where you can shop bloodsworn rings? Kappa

Shopping for items was not my way of doing it so far.

And not all of the MIs can be shopped.

And not all of the MIs can be shopped.

Show your build and we can help you. I bet you have missed some things that can be fixed easily

That you “need” subjugators of the wild might just be in your imagination. A pet build that can not do past SR 35 is kinda unheard of. Look at this SSF build that I made for instance, it does SR 65-66 easily (WIP) [1.1.9.0] SSF Budget Bleed & Chaos Pet Conjurer (SR 65-66) and I almost did 0 farming and even then I got several subjugators of “pet suffix” off-hand.

I checked your build. I don’t see the mentioned affix combination there.
I also have several with the “of the Wild” suffix, but never together with the “Subjugator’s” prefix, ironically.
According to GrimTools, the Bloodsworn Signet rings do not have a vendor. 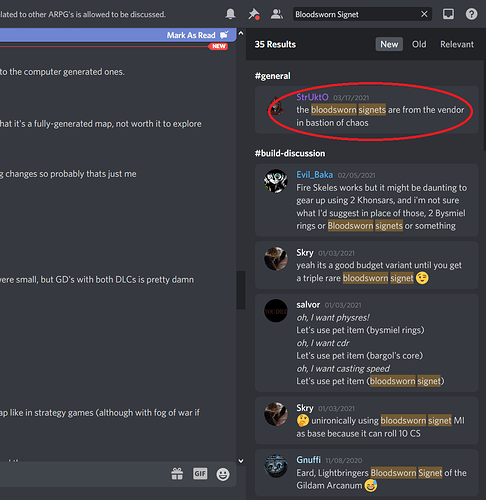 Thanks tgFan, I wasn’t aware of this particular vendor thing, because I never felt like using it before. But if some vendors offer MIs, then that is definitely worth checking.