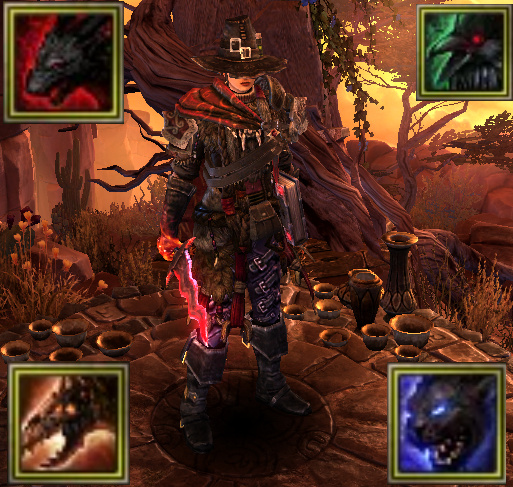 In the GD community, Maya is known for her dedication and knowledge regarding lazy summoner play style. A lot of good information regarding leveling and gearing up summoner builds from scratch can be found in her guide ”the carnival” located here The Carnival - A Guide to Pets .

As far as I know, Maya’s recommendation for a beginner is elemental pet conjurer focusing on Summon Familiar and converting Briarthorn damage to elemental/cold with any of these two faction weapons Bysmiel’s Mindweaver & Bysmiel’s Grasp . Thus, another idea with this present build & guide was also to explore the option to go with another ”flavor” of pet build as a beginner.

I played this char totally from scratch SSF (Self-Solo-Found) except for ONE thing - I used waystones for getting into deep Shattered Realm (SR). Just for me to save some time and sanity (my previous SSF builds did farm their own SR waystone blueprints).

Build is totally HC viable. The first time I RIP:ed was when I wanted to try SR 80 in ultimate with this budget setup

I hope this will be at least of some help for a new-ish player to create a summoner build from scratch. I wish you all best in letting your pets bleed the life out of your foes!

Much text are hidden inside spoilers, click them if you wanna read certain topic.
These are marked with a ► and Purple text.

✹ “Final” budget build that I made 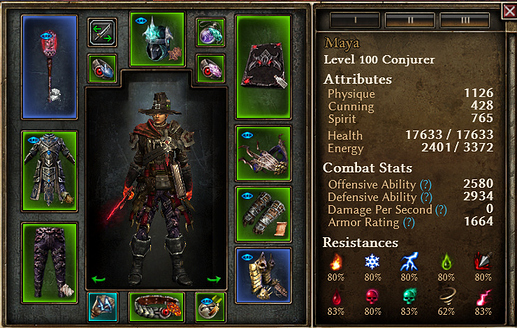 Took me about 35 hours to make this, starting from scratch.
Build without affixes on the MIs (and no augments + using Nighttalon devotion): https://www.grimtools.com/calc/lNkGKqDN (note we got plenty of spirit from our gear to wear off-hand).

Note: I wanted to play with as “basic” gear as possible: only faction items, target farmable monster infrequent (MI) and Epic (blue) items. The guide below will mention how and where to get items and also alternative gear.

Easy, but not fast, ultimate SR 65-66 farmer. Here is when we completed SR 65 for the first time: 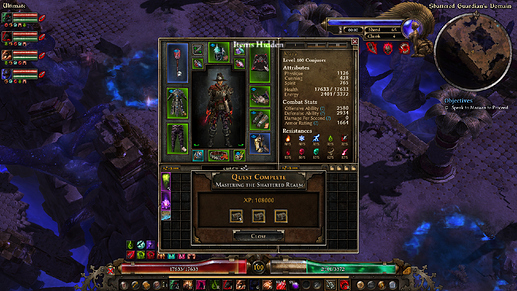 More about performance of this setup is presented further down.

Name of the char is a tribute to the pet-queen!

Note: Grim Tools can not show pet resistances from auras (Blood of Dreeg, Emboldering presence) and not damage type specific percentages, only ”all damage”.

Note: In order to see actual points spent on skills, hold down ctrl + shift in Grim Tools. Sadly, this does not work in game…

✹ Basic information about the class and the pets

✹ Items for the budget build and how to get them

Note: these are just some suggestions. In particular, the Monster Infrequent items (MIs) drop with random affixes (though there is a thing called affix-bias

). I will give some advice what items I consider mandatory (worth farming for) and which are optional (like its good if you can get one but is not the end of the world if you don’t).

✹ Leveling diary (with example build snap-shots)
Note: In order to see actual points spent on skills, hold down ctrl + shift in Grim Tools. Sadly, this does not work in game… I recommend you upload your char to Grim Tools now and then to see how you are doing. Remember that a skill can only be overcapped by 10 points, and game can not display this for you.

✹ Performance of the budget build

✹ Conclusions
I had a blast making this build! I don’t think I have leveled a pet build SSF-style since AoM era so this was a very fun experience for me.

One of the hardest things was to control aggro – let pets tank for a while before you debuff with swarm and curse. Also knowing when to use blood of dreeg and movement skill was sometimes crucial.

I can certainty recommend playing and making a pet conjurer, especially if you are new / poor - even without say Beastcaller set you can do some serious end-game farming with it

Thanks in particular to @AlkamosHater, @Maya and @Duskdeep86 for their awesome pet builds!

Exploration of a budget elemental pet conjurer ala Maya. Maybe one day

So I’m not the only one who went wonka mode from TPOM’s opinion that pets had been completely covered by Maya.

Good luck with your adventure!

So I’m not the only one who went wonka mode from TPOM’s opinion that pets had been completely covered by Maya.

I only cover pet builds that let you play with one hand while eating ice cream with another :3

Mogdrogen builds are too chaotic for me to combine with Ice Cream. I used to go for them back in my Pet Conjurer - Moggy the Puppy! days. But I was less lazy back then

I did the next logical step and watch people playing lazy pet builds on YouTube.

I did the next logical step and watch people playing lazy pet builds on YouTube.

Nice work. Just curious , have you tried taking Bysmiel Command for the Flat RR and Assasin’s blade instead of Flame Torrent and Fiend?

No because Bysmiel command would require one more active skill to proc. And, we wanna be lazy.

I guess you missed the point of getting a mini version of AlkamosHaters bleed and CHAOS damage pet build.

When are you going to finish the guide?

I got buried in work these weeks, that I did not anticipate

I have plenty of time in 2 weeks so I should be able to finish it then.

Is there a particular section you feel like you want me to write first?

Yeah, devotions and itemization. Although devotions i could probably figure out myself following your snapshots, but what items i could consider in different slots would be very helpful, since i have some items stashed already.

Devotions is easy to write, I do that later today.
Itemization is the hardest section to write because I wanna write like where to get each MI etc

Something that would be very useful for me, but usually is not included in any guide, is random items epic or legendaries that would fit the slot very good. Nobody writes about them, because you can’t target farm them, but sometimes they drop randomly and they might be an upgrade, but newbies don’t use them.

Good epics will be included because I used them.

I think contrary, I have help many newbies on reddit and discord, and to me it seems that they think that any legandary is BiS and instead neglect good greens and epics.

I finished devotion tree, note not 100% as I played in my journal but its one way to get final build devotion map.

Well, there are some legendaries used in end builds that can’t be used by themselves, only in conjunction with others, so while they look powerful, they might gimp your build before you find other needed items.

But other legendaries, on the other hand, can be a straight upgrade to a certain beginner build. I like how Stupid_Dragon does with his guides, you can check it up. It’s really useful to have several potential upgrades for every slot with a brief description of them.

I dont have time to include all items that can be used. I also think the player should use their own judgment. I am kinda against too much hand holding.

i understand that. of course no one expects to have e full list, just a few notorious examples.