Hi there, you have been told to not play with matches, don’t you? But what about a flamethrower? 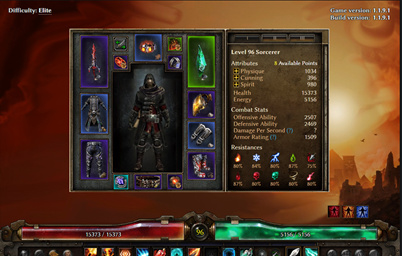 This is pretty simple, burn everything.

A burst of fire AAR and most of the enemies are already severely damaged, burning to death. The remaining ones will perish in flames of the mines, or under a rain of fire launched by the mortar.

An AAR playstyle can be tricky, in Grim Dawn’s higher difficulties I have the feeling that being immobile too long or being too close of some enemies is often equal to death. In consequence most of my hardcore characters have ranged attacks. Even with a massive health regen, monstrous life leach, and a good shield, I feel that some enemies can obliterate the tankiest character who came too close at the wrong time. I even wonder how some bosses can be killed at close range (yes, I’m thinking of you Slathsarr Aethergaze!).

Thus, this build has a simple aim, destroy the enemies before they can reach me, and so far, it worked pretty nicely!

For this build, it’s all in the placement, find the bottleneck where to put the mines, positioning the character and destroy everything. The hardest situations are often when enemies came from every direction or when I flee a bad situation into an unexplored direction to fall into more ferocious enemies. 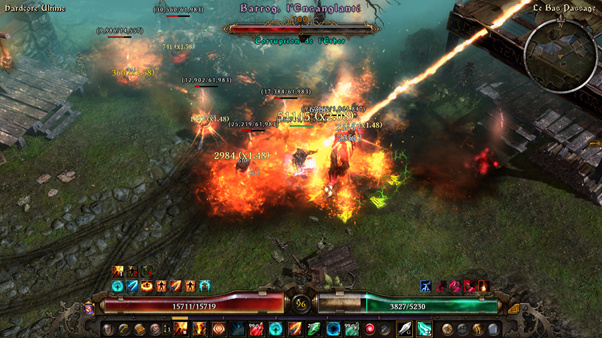 And they said to not put some oil on the fire…

Successfully combining the damages and the fire resistance reduction of the three skills is the key of this build, and even the strongest bosses will melt.

The other skills are pretty standards and can be adjusted according to your preference. Mirror of Ereoctes is a must to have, as well as a teleport skill to be craft on the medal ASAP ! (Without this escape ability and the power peak of the end game, being trap by powerful monsters could be the end…).

I saw other builds suggesting to use Flash Bang, Grenade, Blackwater Cocktail, or Callidor’s Tempest, but for my game style AAR, mines and mortar are more than enough. I also put one point on Nullification, but I never use it (I know I should!).

Concerning the devotion skills, I started this build with the will of trying Elemental Seekers and Arcane Currents, but the results were far below my expectations. I still invested points on Blind Sage for the fire/burning damage.

The other devotion points are mainly here to have access to Ulzuin’s Torch and Blind Sage, but some are very important as Empty Throne for the stun resistance.

I selected Behemoth and Chariot of the Dead for the defensive aspect. I really like health regen and I didn’t expect to have so many with this build.

For those who don’t know, devotion skills only trigger when the attached skill is activated. For example, in my build I attached Giant Blood to Arcane Will. Arcane Will is only active when the health of the character is below 75%, thus Giant Blood will only trigger when my life is below 75%. This guarantee that my character will receive healing when part of this health is missing. Same logic with Blast Shield + Wayward Soul. 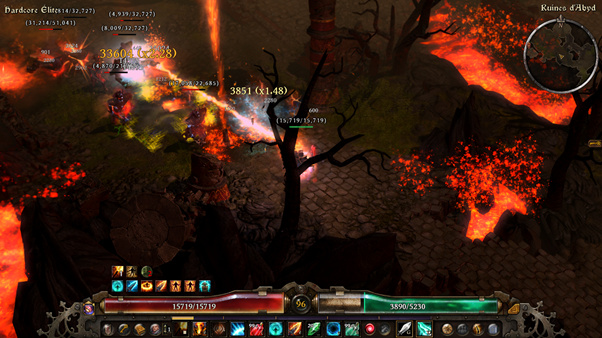 You just activated my trap skill!

The idea around this build:

When I start this build, I have several requirements: it should be hardcore viable, self-sufficient, and fun to play.

I had an AAR spellbinder in none-hardcore difficulty that I enjoyed but wad kind of boring and low on damage. However, I had some great time with the AAR skill and I wanted to use it again. I locked Arcanist for my first mastery and before selecting my second mastery, I considered what type of damage I wanted to deal. I selected one I never explored before, fire. Demolitionist was the obvious choice then for the second mastery.

I started to look for items or skills that converted the aether damage of the AAR into fire damage and I found only one: Hexflame. Which lead me to item part. 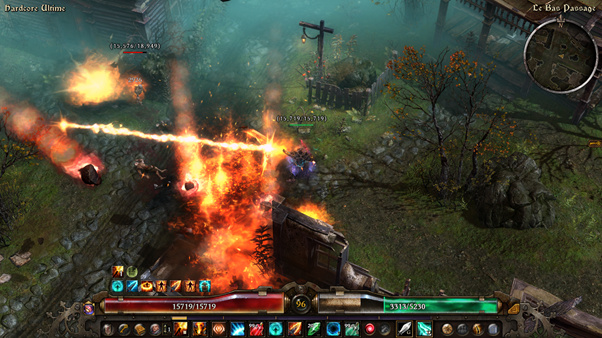 Excuse me good sir, have you some time to talk about our lord and savior Ulzuin ?

All this build is focus around one item: Hexflame

The problem is, this item is locked until level 94. Without Hexflame the build is pointless, most of the AAR damages will be aether damage.

So, this is an AAR build without AAR skill? Yes… and no, because of this life saver relic: Conflagration !

When I reached level 35 and used Conflagration (which is basically a fire AAR skill granted by the relic), I had the feeling to active a cheat code. I just melt down the enemies. I was worried that the power of Conflagration decline with time, but the fire damage bonus kept the skill at the top.

This relic carried me through the entire game until I can finally reach level 94 and obtain the precious Hexflame. At some point I started to be afraid that Hexflame + AAR dealt inferior damages compared to Conflagration. It was not the case.

In addition of Hexflame, I recommend:

Converting part of the damage of AAR into health is pretty neat.

Converting the electrical damage into fire damage allowed my damages to explode. However, your character become a one trick pony that can struggle against fire resistant enemies (so far, I always manage this problematic with some good fire resistance reduction).

For the rest of the items, I don’t have specific recommendation, this build can make a fire with everything. The hardest part is to find balance between high damages, good resistance, health and energy regen.

Blast Shield and Maiven’s Sphere of Protection work pretty well together, and I recommend to prioritize items that grants physical resistance which this build lack.

One other aspect that I like in this build, it had a lot of toggle abilities !

In few words I wanted to share that build that I really enjoyed. The only times I was put in difficulty was against enemies that dealt violent and enormous damages. I’m not sure I recommended it for a first try in Hardcore, the beginning can be rough, but once you have Conflagration, it’s a delight.

I’m looking forward to see your comments, remarks, and I hope that I lighted the flame of interest for this build!

Thank you for reading!

Hey @Shoka cool build!! Have you tried using Olexras Flash Freeze? It has fire resistance reduction (but only while the badguys are frozen).

Hi @Ricardo, thanks for you comment ! That’s right ! Maybe I should swap it with nullification (which I never use). However I fear that most of the strongest opponents will be immune to be frozen, and with this build I try to remain as far as possible of the ennemies trying to give me a hug.

But it worth a try, thanks for the tip, have a nice day !