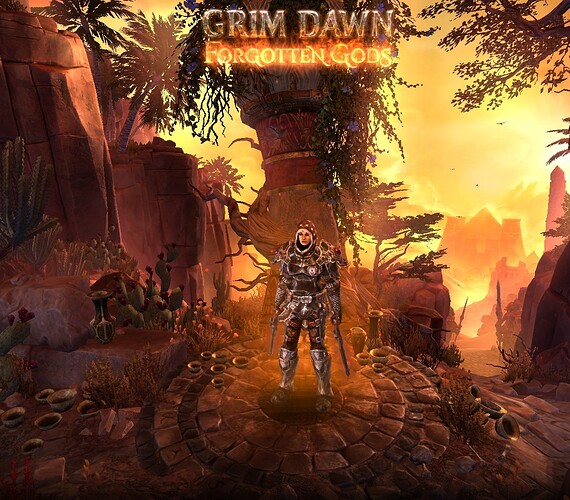 Death and Decay onto the forces that wrought destruction throughout the lands. The Crimson Death unleashes a hail of entropic fury in her path, snuffing out even the sturdiest of opposition who have fallen victim to her litany of vile curses. The stranglers are left with only with their final breath to ponder the folly of a brazen assault, as their mangled & bloodied corpses eventually go limp atop a sea of jagged bone spires that had suddenly burst forth violently from underneath the battlefield. Just as they took everything you held dear, Your fire will become what they would fear. 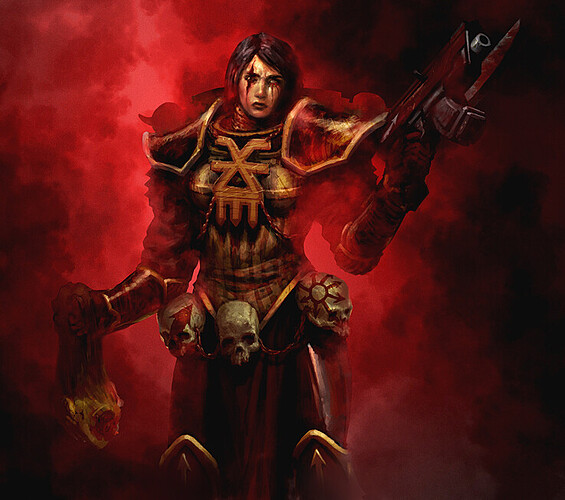 This was my attempt at a Vitality damage build, but ranged. While it is common knowledge that most would pick the cabalist to maximize their vitality damage or to add valuable resist reduction into their attacks, very few would consider the possibility of a ranged cabalist.

As I learned more about items, it somehow occurred to me that the thought of a dual wielding cabalist would be a fun idea to entertain. The results were better than I had hoped for and justified the amount of time spent in terms of item farming.

While I haven’t tested it in Crucible and Shattered Realms, this build was an absolute ‘S’ rank in terms of campaign performance- Completing the entirety of Ultimate Hardcore felt somewhat easier than actually leveling the character, which should make a strong enough point by itself. A Majority of monster Totems were also decimated in record time on sight so it would be ideal for intensive farming.

But despite the build’s high sustainability, its overall health is not all that generous so take advantage of your character’s high mobility to navigate out of harm’s ways. Apart from that, avoid particularly dangerous zones (Tomb of the Heretic, as a good example) and leave any farming work in high risk areas to your tankier characters while playing on Hardcore.

I have a few questions.

Overall, I think it would be better to focus on WPS if you want vitality dual-wielding gunner. Currently you have Bone Harvest build that shoots guns occasionally. You don’t do anything optimally because Bone Harvest builds have better options both for weapons (Korvan Reaping Halberd) and filler skills (Oblivion or Uroboruuk Reaping relics) and ranged auto-attack builds focus more on auto-attack replacers and WPS.

IMO you should decide what you want to do and focus on it. Do you want Bone Harvest build or a gunner build? Because you can use Korvan Reaping Halberd, Oblivion, Ghol’s Reach and Death’s Whiper Hood and your build will be still ranged but with melee weapons… tbh with 16 m range of Oblivion and 11 m range of Bone Harvest it would be even more ranged than it currently is.

This is a rough sketch how I would see a ranged, dual-wielding Cabalist based on your idea:

Components and augments on armor should be adjusted depending what affixes/suffixes you get on green items.

I do appreciate your suggestions and agree that they could even be more suitable, but I believe that if you have found most of my choices weird then that is mostly because thematics are a big part of my build. I knows a lot of users here want to break the ceiling in terms of raw damage output or raw character strength, but I am not shy to sacrifice excess damage if it means that I get to play a character with a distinct flavour or try another playstyle that is just being overlooked in general. After all, I am happy enough with fast killers who don’t necessarily have to be the best at what they do.

Also, I should mention that I tend to ‘test’ my builds in the field. The requirement for me to post a build onto the forum is for that character to clear Ultimate Hardcore by defeating all act bosses. This isn’t a build that was copy pasted from grim tools, but one that I actually completed the game with so it is tried and tested in terms of campaign performance. That ‘S’ rank was not an estimation, but a certification I gave out because this build genuinely did not run into any issues if played accordingly and with care.

All in all, I’m glad that you found a lot to discuss from my build and it does put some interesting ideas in my head. I hope that that you are satisfied with my answers so far, since this build was an attempt to try out a new method which I felt was fun. While there is theorycrafting involved, I have spent a lot more time in-game with this character than actually holding it back as a concept, which is why you might have found it under tuned in some regards. But that also means that users such as yourself now have a solid base which can be worked upon for the future

I tend to not use green items in my builds since it can be more trouble than it is worth to actually roll a really good one for your character.

Well, I agree since I’m a part of “no greens” faction, too. But this doesn’t answer my question: why not use auto-attack replacer and then convert its damage? I suggested 2 legendaries and 2 MIs without specific affixes to enable proper conversions.

This build was really made because I liked the theme of the Blood Knight set honestly.

Then why not go fully for Blood Knight with proper weapon, equipment and filler skill? It’s technically still a ranged build - you just throw a wave of energy instead shooting guns

I just felt that this build has plenty of Reduce Reduction already from my playthrough.

Yeah, but they are different types of resistance reduction and you need both types - flat and percentage, especially for vitality damage which is heavily resisted damage type by many monsters.
This means you need either Revenant, Scales of Ulcama or 3rd node of Ravenous Earth necromancer skill.

Thematic builds are fine. I just think that there are two ideas in your build that are clashing with each other and if you’d focus on one, the build would be simply better without loosing its theme.
Honestly, I was excited to see a Cabalist with guns and then kinda disappointed because it’s a Bone Harvest build that just uses guns as filler. It would be interesting the other way around - focusing more on guns and using Bone Harvest only for a buff.

I’m not criticizing, especially since you are going for some theme build. I’m just asking for your motivations and reasons behind your decisions, because as you said yourself - you made some weird choices here and there.

I’ve taken a longer look at your proposed build, and I’d say it is good enough to be suggested as an alternative.

I’ll update it into the guide if I have the time, though I’d have to modify it a bit (Bleeding and Aether Resistances are not capped in the example you gave, but I think It would suffice if I assign the appropriate prefix/suffixes to the MIs).

Though in the case of your suggestion, I’m happy to even strip all points from the ‘Bone Harvest’ line to be used elsewhere