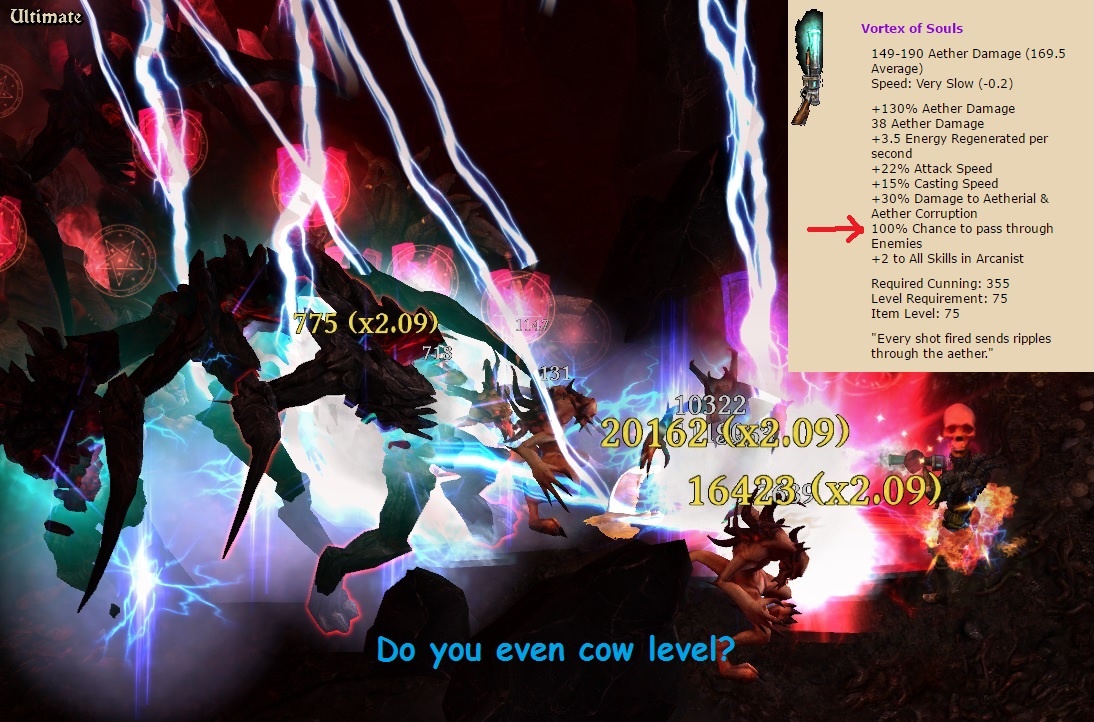 Update: mozarus killed clones of bourbon on HC with a variation of this build, scroll down to see his version, i basically pasted the contents of his PM for those interested in the elementalist version, with a couple of my own comments. Overall I feel elementalist is a significantly tankier but with lower damage/quality of life.

[i] This build is based on the gun [COLOR=“Purple”]Vortex of Souls which has a 100% chance to pierce. This means that primal strike’s aoe explosion will trigger on every enemy hit by a single shot. Resulting in each enemy in the group being hit by multiple primal strikes in 1 shot from you. 1-2 shots will decimate an entire screen of tightly packed mobs since each mob will be hit by multiple primal strikes in a single cast. Much like lightning fury in diablo2.

Note that graceful dusk’s description is bugged above, the gun actually has around 250-250 base dmg, full aether.

[v1.0.0.2]Video: 15s fabius kill; facetank 100-0% no consumables. Note that against most single targets, we switch to ultos’ stormseeker for more single target dmg

1 more advantage of a 2h gun, is the ability Silverspread from silvercore bolts is very powerful, since its 80% weapon dmg x 5. and does 50% more vs chtonics. You will see in the boc video, that while we are pretty good at facetanking, we can fight prefectly well from range, esp with silverspread against cthonic bosses. One strength of this build is that you can facetank to maximize dmg but you don’t have to, playing safe from range is perfectly viable.

Against nonchtonic single targets, weapon swap to ulto’s axe as it does more dmg against 1 target, ie. fabius etc.

Without +skills. note slight variation depending on belt choice
http://grimcalc.com/build/HI4js1

Cast curse of frailty + bloody pox (to trigger arcane bomb), then if convenient, line up the pack a bit before shooting into it. against weaker packs just CoF and shoot, dont need to cast bloody pox.

against high hp singular mobs, i.e. bosses, switch to ultos’ stormseeker, as it does bit more damage against single targets. Position urself right up against the enemy not just within melee range, this is to make sure all projectiles of falconswoop hits them.

In BoC, silverspread is very powerful for finishing off higher hp mobs, you dont really need to weapon switch against heros here.

Shar’zul Tips: easily facetankable with wendigo totem, start by charging in with ultos stormseeker. when he enrages, he can still be tanked but also have chance of bursting u hard. so when he enrages, switch to gun and fight from range with primal + silverspread. silverspread with a 2h weapon hits chtonics HARD. -> see boc vid. 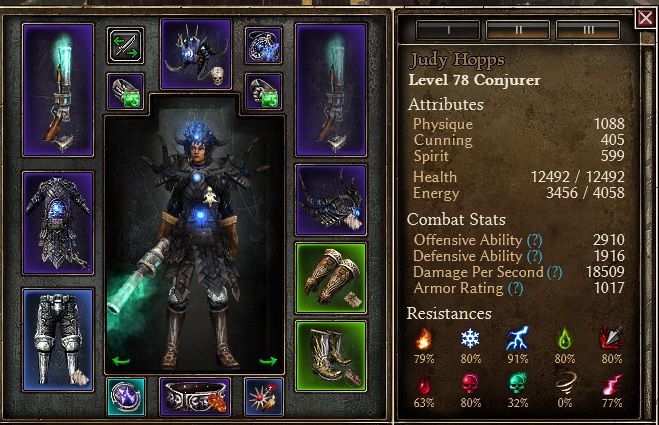 Gearing:
Due to having very high Crit dmg from devotions/overleveled stormcallers pact. We focus hard on OA. my char has around 2900 OA at lvl 77 without procs (ring proc up 100% of the time so not really a proc.)

Note the faction green gear - you can keep remaking game to roll the best stats on them before you buy.

we don’t need much defensive devotions because shaman tree offers so much hp/healing and also we mostly fight from range and most of the time we don’t take that much dmg.

Leveling guide:
Lvl with physical focused primal strike. get primal bond. After finishing primal bond primal strike+torrent+heart of the wild. go to occultist and max CoF first to debuff physical/lightning resist. you can do this all the way from 1-75.

Initially find high dmg 2hander, both range+melee. go melee when u can tank, if cant, go range. silverbolts is a great weapon at lvl 50 to use all the way til 75. Oh and rush kraken on the devotion, u can get it really early, shit is beyond broken and makes leveling a joke.

In closing:
This is quite possibly the best full screen clearing build i’ve played so far. I was surprised how good it was at killing single target as well which was unexpected.

Very satisfying and fun to watch 1 shot clear the whole screen and a bunch of orange numbers pop up. I hope you have as much fun playing it as I had making it

Link to char if U want:
https://drive.google.com/file/d/0B00...ew?usp=sharing
pass: Raziel

Your builds are getting more and more insane for every passing day.
Well done on the theorycrafting. Impressive build to say the least.

Very nice build, I may try this out.

Sent from my SAMSUNG-SM-N920A using Tapatalk

Its funny I’ve been building something similar lately, with RakaJax.

how would this build be for a newer player? i have beat the game on normal and few chars in the 30s. Having hard time finding which to stick with but i dont have much for like great leveling gear or anything. so would be pretty fresh.

I debating between this and a warder retal build w/ blade arc for some kind of dmg lol.

I have a conjurer around lvl 20 as a pet build that i would just respec to this.

how would this build be for a newer player? i have beat the game on normal and few chars in the 30s. Having hard time finding which to stick with but i dont have much for like great leveling gear or anything. so would be pretty fresh.

This one relies on endgame gear and ranged primal strike is more challenging to build than average fire striker. I went from feeling OP to underpowered and back frequently while leveling and I have lots of items to support it.

The rifle is mad. I have same sheet DPS with it by the way, 26K.

Finally someone made this thing work!

Never occurred to me to go for Conjurer, I was always focusing too much on the aether damage. I have a lvl 80 Conjurer and an Ulthos set, I just may give it a try.

ok thank you!
I will get me another guy up to farm some gear before I worry about this.

Damn bro! I just finished making your Pyromancer build and now you want me to try this? Sigh Okay…

You beat this game over and over with style. You are really good at this. I wonder why your builds are not on build compendium

You can also use the 2-handed rifles Will of Fate and its empowered version to trigger the same effects while leveling as they too have the “100% Chance to pass through Enemies”, however, I believe it is not listed in-game…

Very good build.
But why not druid?

Very good build.
But why not druid?

I imagine that curse of frailty/vulnerability resist reduction gives you more damage than anything in arcanist. The way the game is balanced right now reduced resists is pretty much the single most valuable damage boosting stat.

It doesn’t say it on the in-game weapon sheet, apparently. But it still passes through enemies from what I’ve seen.

Same with the Will of Fate rifle someone mentioned earlier.

I think jajaja can smell the nerf from a thousand miles away but anyway still gonna try this next time.