VoS lightning druids had quite the roller coaster during the public test period. VoS had damage reduced twice which definitely hurt this setup to the point SR75-76 was not especially fun. But then lightning flat was added to a few sources, Tempest devo got betterer again, and things got close to evening out from 1.1.9.1. One the big complaints of the 1.1.9.1 setup was low DA, in the 2200s. Also all the crit damage with about 3k OA was a shame as well. So we’re gonna change some gear to try to address both! 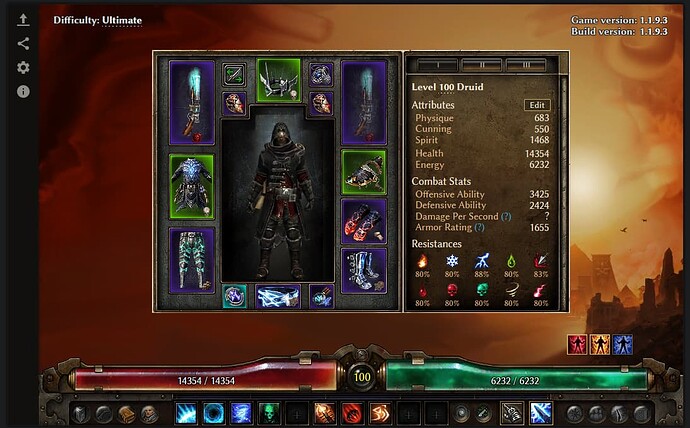 The big change in the helm. We drop very hard to farm with this build Ravager helm for the buffed Ascended Diadem. This drops from a ton of mobs so farming shouldn’t be too rough. Now gives 6% OA and DA to Stormcaller’s Pact which covers both of our wants. A +3 to torrent or storm surge would be super sweet but I went with generic Celestial for % and CDR.

Shoulders go to Ascended Epaulets, another common drop. You can still run Ultos if you like here or don’t have a good set of the MI shoulders. You gain phys res but lose overall res overcaps and OA with a tempest roll.

Finally gloves change to Cindertouch. I wish Purging Touch had an OA roll like this, or flat, but despite the latter having a fully converted proc, Cindertouch wins out.

You have some flexibility on the rolls for the 3 greens. I’ve gone with a balanced slow res, OA, and CDR spread, but we still have 4 crafts for slow res if you want more damage or OA. I do like a vitality roll to give us more buffer with the % health we carry as well. Or just find OA everywhere and push it to the moon. Higher potential for double rare drops to boot.

Grava still sucks something awful. In 75-76 you can’t facetank, so get use to stutter stepping away from his attacks but not far enough to trigger a charge. Playing ghoul and mirror well you can still drop him after one null bolt cycle, two if you get sloppy or need to run away. 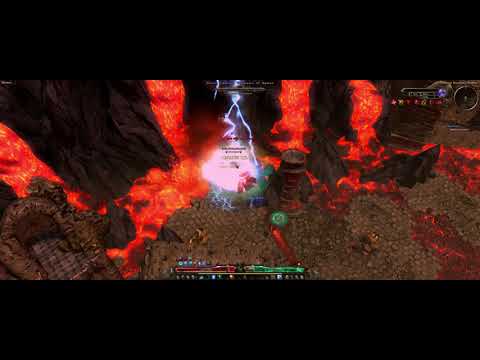 Crucible 3:58 courtesy of @nofika4u . Obviously this is pushing the high end of performance potential but whatevs 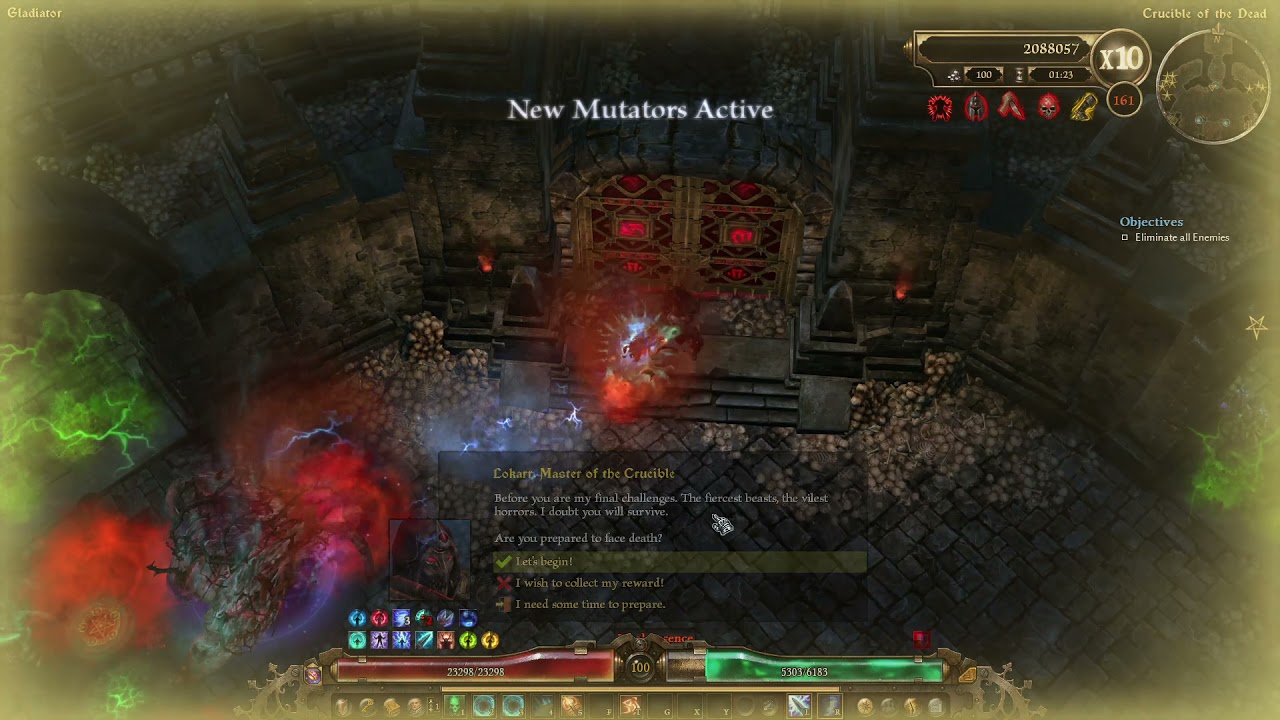 So basically we’re back where we started, maybe a touch better due to OA grab. Amazing crucible runner, decent if somewhat fragile if playing reckless SR runner, and non-starter for superbosses unless you just really like kiting for 10 minutes. Should it be nerfed? Probably! But not the do everything well/fast that a bunch of physical options have turned out in 1.1.9.3 so fingers crossed for a gentle touch

I had a aether primal strike vortex ritualist In the planning stages, but this seems better in every way. The cascading lightning is soo pretty!

Damn, can’t believe it works so well and on Druid of all classes. Great job.

I had a aether primal strike vortex ritualist In the planning stages, but this seems better in every way. The cascading lightning is soo pretty!

Aether / vitality ritualist both work… Not quite as well as this build, but I’ve done both in the past. The vitality one is pretty funny using full rotgheist, the new primal strike medal, and desolator for the weapon

@eardianm I see what you did there, when you wanted Vortex of Souls to support Shaman

Haha, to be fair I did not expect this level of results when that request went through. I’m bracing for either a damage cut to VoS or a reduction on the proc bonuses on those rings. Not convinced PS needs any more tuning or that the +2 shaman itself broke anything, this seems like a corner case. The +2 is still a very helpful addition for non-lightning damage types to get PS line near hard cap

Haha, to be fair I did not expect this level of results when that request went through. I’m bracing for either a damage cut to VoS or a reduction on the proc bonuses on those rings. Not convinced PS needs any more tuning or that the +2 shaman itself broke anything, this seems like a corner case. The +2 is still a very helpful addition for non-lightning damage types to get PS line near hard cap

Yes, even with the total damage % mod and + flat on the conduit the aether ritualist version of this build is in the 1:30 - 2 minutes slower in crucible with much lower crit numbers.

How does the Vindicator version of this compare? (and what would it look like if it does?) Thanks!

Vindi version would probably need some gear changes and +skills start to become very tight on the inquisitor. You don’t have a good way to convert pierce flat to lightning so base damage is lower and crit damage also takes a hit assuming you go aura of censure for extra RR. It can still work fine but I don’t believe it can push the same results if you’re going for speed.

So, it’s on my list to take a crack at again but don’t have a modified gear layout offhand right now. I believe most of the other ranged PS vindi forum builds use the green MI gun, but aether -> lightning is a pretty universal shaman setup between the belt and storm witch rings so you could potentially just swap the gun for VoS and see how it goes.

I have done vindicator in the past. It wasn’t anything to write home about honestly. I believe @John_Smith dabbled with it as well

. Gratz for sick build.
Anyone know if Torrent is affected by %WD reduction of transmuter?

Hi, thanks for the great build! One question, with storm shepherd and valaxteria robe you can get around 90% aether to lightning. I was thinking of switching ultos shoulders for good ascendand shoulders with resists (approw 30% aether to lightning and +3 for PS). I would give up ultos gem as well for good lightning rolled kaisan for +skills and one glyph for a stalwart ring with 6% and 80 DA for gaining more survivability. Do you think in first place its worth it to go for 100% aether conversion instead of 90 in first place? Thanks!

Ignoring conversion and looking at the gear itself, if you’re sitting on a seer’s kaisan of <lightning%> with say, +storm surge, and a well affixed ascended epaulets, then absolute go for it and make sure you let Ultos know his utter failure. I mostly don’t sweat greens in builds, especially after the great affix droprate buff, but I do avoid specialized kaisan necklaces if possible. If you’ve got it or don’t mind stashing it up, then there are decent benefits. Slightly increased damage/crit/OA as long as you can still cover your resists. Slightly less phys res but I don’t see it breaking the build.

However, if you put a stalwart :mi ring: of protection on this build I will find out where you live and make Ultos take a dump in your oven. It doesn’t need the DA and doesn’t have the life steal/sustain/single target damage to do anything crazy to Ravager, for example, that would be the catalyst for looking at more DA. It’s a snooze through SR75-76 and safe enough in Crucible that even my poor playing skills don’t have an issue. If you really want to swap from the glory that is 2x Kelphat’Zoth, I’d try to shoehorn in a charged cronley’s signet of alacrity, as attack speed is the most glaring opportunity area.

The whole build post is showcasing your answer buddy.

Thanks a lot for the clarification, especially regarding the conversion part! Clear :-).

I have some good rolled Kaisan and Ascended’s in my stash and I feel like I could use the additional skill points. Been stashing good greens way too long to avoid them, but wanted to see your idea on this. Thanks.

Hahaha alright. Indeed, no need for Ravager or so. I want it to be SR ready. But found out that eg Morgo can be pretty tough already as well, that’s why I was experimenting with the MI ring in order to gain 2800 DA~ in total , which is not high but does make me survive some hits. I will switch for Kaisan and Ascended’s and go back to 2x Kelphat as the damage on these is indeed ridiculous . Thanks a lot for your good explanation!

Will update for 1.1.8 tonight, but looks like just minor changes. More dot on the medal and DA added to oak skin, lose a bit of OA and Crit on arcanist side

edit: No GT update yet for any potential tweaks, but still feels the same. DA over 2600 now too for those concerned

Thanks for this build! Level 57 and working towards it! Druids are super-fun!