Obsidian Juggernaut has seen a series of builds through the years. Earliest I can recall was some clever for the time aether based setup with duality rings from jajaja/tz or one of the early crew. Deceiver came on the scene shortly after FG launch and rah’zin set introduction, and another Pyro popped up last fall. I tried to do a witchblade version way back in vanilla with crap gear and crap mechanics understanding, so as expected it was awful. I also build a deceiver in a similar vein to @Valinov using rah’zin last spring, which started to feel good damage wise but was very glassy to play. Admittedly I haven’t tried @RektbyProtoss setup yet, but the SR set in particular appears to be sturdy. @mad_lee even has a warlock version floating around.

Anyway, here I am on attempt number 3 in 5-6 years with what finally feels like a complete build. Punch in the face DPS expected from a giant earth rupturing hammer and defenses to keep you upright. I had never played with Infernal Knight set, but with mines generating the biggest chaos RR and the helm providing quality of life on point blank mines, that was my starting point. We also have +20 to hellfire mine so that’s fun. 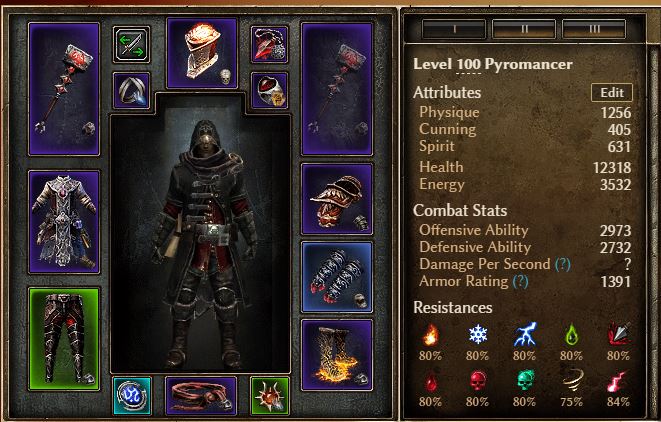 This is a safe facetank at SR75-76 ~90% of the time. You’ll see in video below where I yolo’d into everything, missed that I was arcane debuffed, and generally thought nothing of my well being and died a few times (also with a 15% chaos res modifier). If you aren’t a goober and/or bother to slot a movement rune, this should be extremely safe. I pushed to SR80 yesterday and it starts to get a bit more painful, would recommend slotting a +DA or resist prefix on the medal if you can find one. This was spun up in GDStash but the main thing you’re getting from affixes are stun resist and a bit of OA/DA, so you can definitely run with non-ideal drops. Will be building this with legit gear now.

Weapon: Obsidian Juggernaut. If you haven’t used this skill before, you want to treat it like a shotgun and get close. Also stairs are your real nemesis so mind your positioning. If you’re not seeing damage like expect, move to flatter terrain.

Helm: Infernal Knight’s Faceguard. Chaos and the all important radius mod on mines and BWC.

Rings: Voidheart for RR and near perfect fire conversion. Went Entropic Coil for flat and skill bonuses, but combustion band may be better for additional chaos RR. Of note is a frozen heart component to give us a bit of freeze resist. You’ll see in video I got chained frozen by Moose when being sloppy and died, so we could arguably use even more.

Gloves: We’re tight on cast speed so Doomtouch is the choice here. Useful mods and a mostly converted proc

Boots: Timewarped Walkers cover the majority of our slow resist

Medal: Lagoth’Ak’s Voidbinding. Buff our chaos mines, ensure full conversion, cover out pierce resist gap, and 2 affixes to play with. Try to land something with stun reduction, the rest is perks. You can also run non-myth blood sigil of ch’thon here

Belt: Sash of the Bloodlord puts in heavy conversion work for us.

Pants: Free for all slot. You want stun resist, OA, DA. Otherwise grab what resists you need and if you can get leech or skills, great.

Chest: Vestments of the Severed Faith. Missed these initially as you can also run Infernal Knight Chestpiece. Latter helps cap cast speed under DG proc, but bonuses of Vestment are better imo.

Devotions: Everyone’s new rage Scales puts in heavy work here. Ever wanted to play obsidian juggernaut and not have to drink a single energy potion? Never put in the effort to squeeze in 8 yellow and some vitality conversion to embrace the sustain? We trade off the usual moar damage approach of DG + Abom and/or Torch for great QoL energy management and a big tool in our sustain belt. With that pulling us east across the map, we can still grab Dying God and (converted) Magi for damage while bat and fiend assist with leech as well. The map is admittedly ugly but absolutely worth it if you want to play tanky Juggernaut and not kiting Juggernaut. @Crittrain bopped in some alternative options as well that can still be tested by swapping DG + Magi for Abom + Torch. Someone with more time/experience in the devo tree may find a way to tweak this path and gain back a point to get DG 7th node, or swap eel for sailor’s for more freeze resist. Initial offensive approaches with only bat or only scales did not perform consistently.

Gameplay: WATCH YOUR TERRAIN. Do not engage on steps or in front of big obstacles, Obsidian Juggernaut follows vanilla Forcewave rules and does not understand the Z axis. Otherwise, if you’re not an idiot like myself and fit a movement rune, you dash into the edge of a pack, drop Cof + mines + BWC, and then start swinging. Mix in a blazing eruption when off cooldown, as far as I can tell it’s DPS neutral at worst and helps leech in a spot (also tied to DG proc). Pack dies, move on to the next. Mines + fissure will mostly wipe out trash without your input. BWC aiming gets more important in higher SR because you want those bat proc firing constantly. Pull mobs to your pool if you really misaimed.

SR: As posted, SR75-76 stable. If you’re dumb like me in the video, you can die, but just don’t be dumb. Also don’t recommend running with the chaos resist mod or cast speed down mod personally, but did the former in the video to show a bad scenario. SR80 is still doable, but would adjust mods for more DA and resist overcaps. Also for whatever reason this build put me on Ramzul’s radar. Literally never had him spawn in SR boss rooms before, he then spawned 4 or 6 times on me. He’s an asshole, don’t facetank him. You can facetank Reaper fine if you don’t let ghosts pile up. Grava also goes down between null bolt cycles. Fabius is the most dangerous in packs, stop swinging at him if he blade barriers. My personal favorite moment was moving directly into Moose’s ice crystal shot pattern and freeze locking myself to death.

Thanks All the previous threads and authors already linked, after putting it together ended up looking at most to baseline on stats/damage. @Crittrain for the gloves recommendation and poking at the devo tree with me and seeing what non-standard options we could tease out. @Monceaux for also testing and confirming my thoughts.

Great results! I wonder how fast it could be in Crucible with glasscannon devotions. I theorycrafted glassy Deceiver with Tremor altough did not test it https://www.grimtools.com/calc/4ZDqkgaN

Nice build, chaos damage works fine even with tanky devotioned builds; I just made a melee chaos sorcerer just to be meme but it ascended that and become a middle-tier build. Though you can use solael-sect pants with chaos damage and also get some more life steal and freeze resist(with some suffix even slow or stun too) since you don’t need those skill bonusses and agonizing flame won’t create much difference with 3 points more, lifesteal is better.

So that SR video is representative of my usual braindead play, so I don’t often fair well with glass cannons. Lol. But there is definitely damage left on the table if people can keep it alive.

And absolutely @fordprefect, solael pants are the correct play here, that will go in build update. I spaced on those having freeze resist as well

I havent got around to testing it, but I had a warlock version as well https://www.grimtools.com/calc/4NOqbQoV
rr is pretty close to yours and it has like another 800-900% damage, huge racial, and higher weapon damage… soo should be pretty great

might as well dump this here since I’ll never get around to testing it… an oblivion + doombolt harbinger pyro https://www.grimtools.com/calc/a2E6nO8V

Arcane spark on medal should do the job

However I doubt with my devo route any Tremor build would be consistent. If pretty balanced build could go ~5:20 run then tremor itself should have potential to go sub5 with more damage orietented setup probably.