Hello everyone, this is the first build I’ve posted here. I’ve tried tinkering around with Blightlord set and found a way to convert 100% of Ravenous Earth’s damage to fire.
Updated for 1.1.7.1!

Check out all of my builds over here. 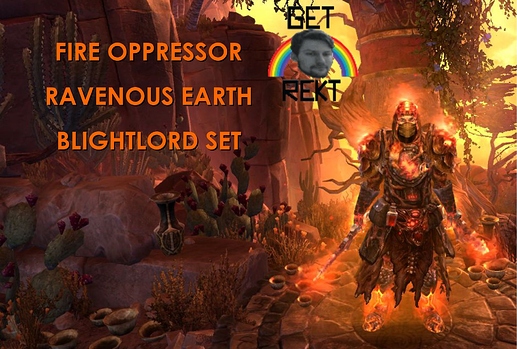 Most important change: new FX
These changes are a net buff to this build. It gained -12% additional fire RR, 1% OA/DA, 16 flat fire to RE, 20% RR to RE and only lost it’s 10% attack speed slow on enemies. Also the set’s skill is now a passive proc instead of an active cast. The skill being changed to a proc is a trade off between having the RR insantly (cast) and not having to waste your time casting it (proc). In the end the QoL that the proc gives you is probably worth a little more, especially in dangerous environments such as the crucible and the shattered realm. So everything this set got is a net buff (except for the removed attack speed reduction) and it also makes the viper devotion not mandatory anymore. This build should perform better now than on last patch.

This makes Justice chest obsolete and I switched it over to Fateweaver’s to increase phys res. Also switched the boots to craftable Grey Magi footpads. Also switched around grava’s pants to a different roll that I managed to get in the meantime. It is still not mandatory and can still be switched over to sth more accessible for new players. Only thing that needs to be changed alongside the pants is using a seal of resonance instead of the second seal of might to keep stun res at reasonable lvls during ascensions downtime. The insane amount of res overcap this build got with this change actually made me go for +30 DA augment on armor, which I really don’t like generally, but in this case they fit perfectly. Also featuring new FX for Siphon Souls.

literally no change for this build

not mandatory
chest: Fateweaver’s for tons of res, especially phys res
gloves: Viperfang Grips for OA and flat acid to RE
belt: Crimson Lotus for +2 RE, +1 Oathkeeper, resistances and %fire/%burn
relic: Serenity, best all around relic atm also +1 to Necro makes it easier to reach 26/16 RE
pants: Grava’Thul’s Legguards for +3 celestial presence, affixes are great for double Seal of Might set up
boots: Footpads of the Grey Magi for phys res, spirit, elemental res; Stoneplate Greaves

Conclusion: Even though sheet stats aren’t amazing, the nature of the RE skill gives this build a lot of dps and also very good kiting potential (at the loss of dps).

Defense
Play around ascension and mark of torment, you can’t tank anything without one of them up. Switch between tanking and kiting playstyle depending on your cooldowns and the type of enemy you are fighting. Phys res was improved a lot compared to former setup.

Crucible
I’m pretty sure you guys can achieve better time for crucible, as I am a total crucible noob. This run was literally the first time ever that I did crucible gladiator 130-170 in hardcore. Also the gear can most certainly be optimised a lot more for crucible, I’m sure some of you guys can do that

Final Words
It’s been a lot of fun theorycrafting, playing and streaming this build! Thank you very much everyone for reading this build and watching the videos! Feel free to comment, critize, etc., any feedback is appreciated

Have fun blasting away enemies with the burning fire exhaled by ravenous maws!

The build has basically only seen buffs in its existence, so it should be performing better than ever right now.

Wondering if this can go to high SR…

Wondering if this can go to high SR…

In SC and with rune of Displacement, I think it should be able to do SR 75-76 now.

I’m wondering how this would stack up vs. thejabrixone’s vitality blightlord cabalist. I’m in the process of converting my cabalist to it. Sadly I lack the time to level an opressor, but damn fire RE looks cool.

How much damage are the Guardians doing?
I had a similar build theorycrafted but I left them at one hard point.
Is it just because there are not that much left to spend points on that you went with maxing them, or are they contributing a significant amount of the total damage?

So I tested the Guardians vs dummy and I also removed eldritch fire from them. So with 0 debuffs whatsoever they crit for 15-20k on average with occasional 35-45k crits per hit and they hit ~12 times in 10 secons. Grim Internals shows me a dps of 65-85k for all three combined. Dps would obviously be higher with all debuffs.
I wouldn’t call that amazing and you probably don’t absolutely have to max them out, but they are not bad either. It’s good secondary damage and as you also said I kinda don’t really have better options.

Is that many points you have spent in Foul Erruption worth it? Only works if a mob gets killed by RE and explodes (+ you already have flat rr on Elemental storm devo proc)

Ideas:
Judgment for DA shred, but that’s another button to keep track of. More Siphon for radius, blood boil for DA shred. Mark of Torment. Presence of Virtue for more flat OA.

You are looking at the outdated GT link my friend…

You are looking at the outdated GT link my friend…

Is this still good for current patch - im at Lvl 55 right now, still on on normal, as im trying to get my First HC character to 100.
Hopefully this build can do it

The newest Grim Tools is in the video description not in the OP:
https://www.grimtools.com/calc/w26Kmq8V (1.1.5.2)

Updated the thread and grimtools link for patch 1.1.7.1. There was however no real change since the build only got buffs at it stands and I personally haven’t found any upgrades so far.

Also old speedleveling VoDs have been added to the leveling section.

Ravager: Could be done on SC I guess.
Callagadra: Probably a big NOPE.
Crate of Entertainment: uhhhh…

I would like to ask you something about what i’m quoting: Those tough guys are still same with new patch/build?

Those tough guys are still same with new patch/build?

Yea pretty much, the bosses haven’t changed and while the char got buffed a bit here and there, it doesn’t have enough physical resistance to be able to facetank or even semifacetank ravager or callagadra. Technically you could run around in circles like a headless chicken until they die, but due to the nature of ravenous earth that will come with a big dps decrease. Thus the fights would probably take way too long and be too risky for HC.
Crate of Entertainment is a lot squishier but also the rippiest boss in the game, so I couldn’t get myself to kill it more than once so far and I probably wouldn’t try it ok this char.