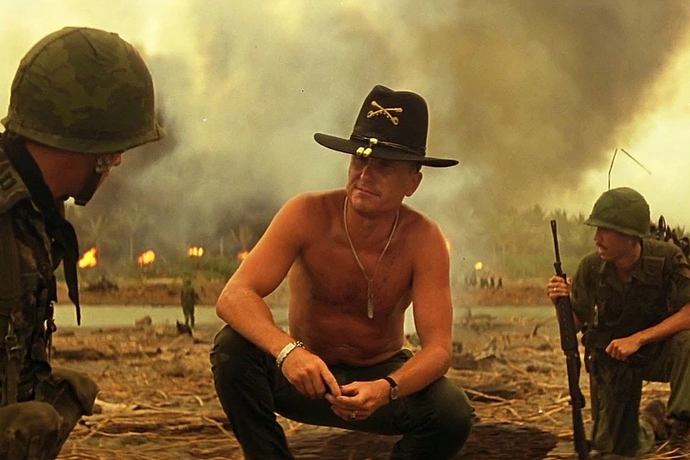 You smell that? Do you smell that?.. Napalm, son. Nothing else in the world smells like that. I love the smell of napalm in the morning. <…> Smelled like… victory.

credit for the picture and relevant quote idea goes to @Safarel

I felt the need to create a decent Defiler spec ever since Crate has reworked Clayrvoiant set and thus inadvertently destroyed my Soul Piano Defiler spec, a spec that was one of the very few working Defiler builds in the game.
And then @Valinov rolled out his aether Defiler (do check it out, it’s pretty cool) which turned out to be surprisingly good. So I was almost urged to produce something competitive out of this forsaken class.

*craft couple of items for energy regeneration and rest for %armor

Idea was to create a powerful caster that relies on two completely unrelated damage types. It was not an easy task given that there is very little item support for the Blightlord set that is the core of the build and Mark of Burning Shadows medal which is also key to build’s performance. Every other item is there to complement either damage and main skills or to patch holes in resists and stats that Defiler naturaly lacks.

Build is extremely resilient in Crucible, I haven’t died once in 10-15 runs with it, nor did John (who made about 5 runs with it with blessings/banner). But you have to keep an eye on your circuit breakers cooldown, i.e. watch your Blast Shield/Prismatic Diamond/Mark of Torment/Serenity cooldowns and play on a safer side when most of them are cooling down.
In Shattered Realm build can farm 65-66, but expect to die sometimes. Defiler is not well equiped for Shards: lack of cc-resists start to show. 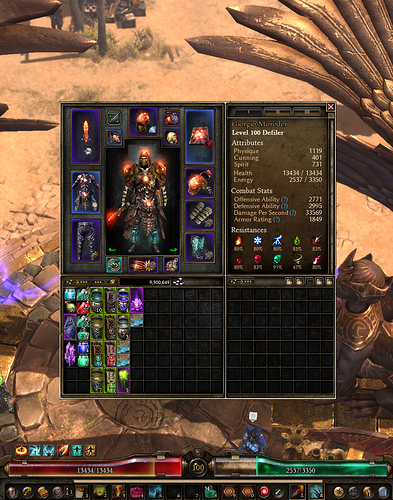 Magical with Dying God proc up 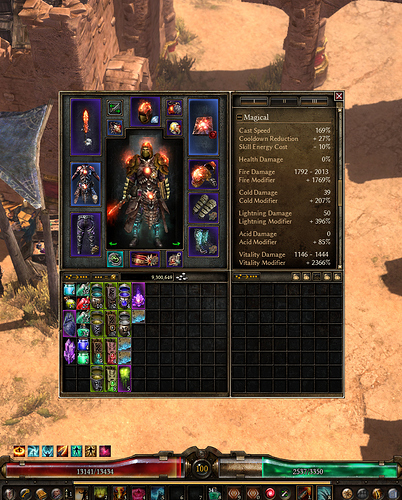 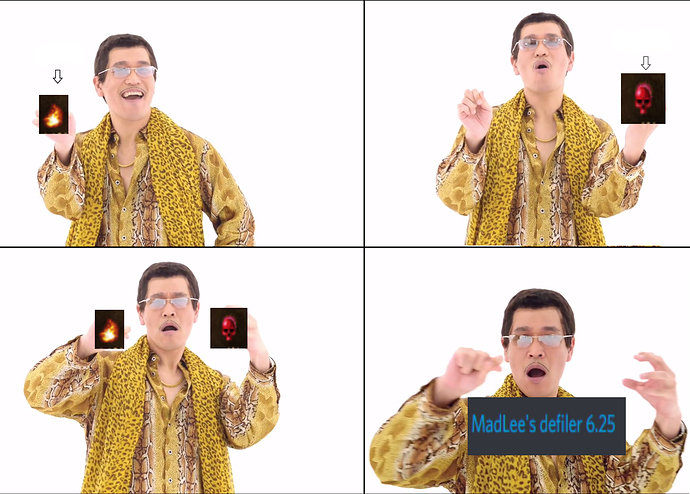 Thanks to @Tararihen for that pic

So Defiler have good option, tomorrow will update ny Saboteur with 100% Crucible clear rate and nice times, Warlock will support Trozan set, so there’s only one true Meme champion out there, Blastoff

Is that Rimetongue N&O Sabo? Is it almost as good as my Shattered N&O Sabo?

Is that Rimetongue N&O Sabo? Is it almost as good as my Shattered N&O Sabo?

Yes, Rimetongue. Did 9 out of 9 successful runs including the one where I forgot to spawn Spirits and proc Ultos

Not bad, but it seems like Shattered set is just too good for auto-attacking specs with no dedicated sets.

Not bad, but it seems like Shattered set is just too good for auto-attacking specs with no dedicated sets.

Still after I see under 8 minutes time consistently, changed everything else in defense. So if I use offensive setup I can cut a lot more, but not needed since Sabo is glassy class. Even John use Emyrion light route in 1.0.7.1 and Crucible is harder now.

EDIT: Sorry for off topic!

Truly amazing!
I tried this kind of mix for blightlord defiler before and I got only about 9min without banner, so I scrap it. Haven’t try 2 pieces festerblaze though.

Thanks for that. I will try that out, however:

EDIT: I also don’t have any problems with life steal, Wendigo seems to be spreading quite a bit with BH and build never dies in Crucible.

@Nery you still don’t wanna choose more than 1 damage type. One mistake with how you build this and it’ll become the usual shit defiler we know, so props to mad_lee for making it work so well.

@thejabrixone wendigo ticks per second so you only need to proc it once. I agree with mad_lee here.

@mad_lee niiiiiiiiice. Never thought the amount of fire/vit items would be enough to do this.

@mad_lee @x1x1x1x2: Hmmm, I see you guys’ point. Spreading wendigo’s mark may not be that important for this build as the trash die quite easily because of BWC insane AoE

Hmmm, I see you guys’ point. Spreading wendigo’s mark may not be that important for this build as the trash die quite easily.

It’s just with 51% chance and 2,2 seconds cd on BH that has huge aoe radius it spreads well enough

On a side note, in next patch, you may want to convert this to full fire :p. As thermite mine become reliable, this can be even better than alexgoldfish’s fire oppressor!

On a side note, in next patch, you may want to convert this to full fire :p. As thermite mine become reliable, this can be even better than alexgoldfish’s fire oppressor!

Actually, full fire Defiler is a pretty miserable affair since it doesn’t have all the leechy stuff from Vitality. And this Defiler might be already better than Alex’s fire Opressor since his run is recorded with the heavy use of pharma.

It’s mainly because oppressor doesn’t have a good secondary damaging skill. It can have a better clear time if all GoE damage get converted to vitality via blood orb.

BTW if it can do naked Crucible it should do SR+ at least half the time, I think…

RE and BWC are both less effective in SR tho last time I checked.

In SR lack of cc-res starts to show. As you can see from SR 65-66 video, 1on1 any Nemesis is not a problem, but on some boss chunks they group up and it becomes very dificult to kite effeciently. I die on unlucky boss combination on Shard 66 there like three times.

Maybe if @Zantai considers adding some cc-res to Defiler thru dedicated gear or add trap res crafting bonus/potion it will have a better chance. Putting this build together was a huge pain because of how undersupported Defiler is and how it lacks basically every stat in the game.