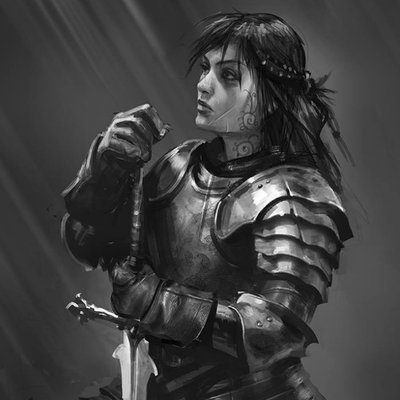 Cairn. A hamlet somewhere at the borders.

The crowd cheered as the beaten young girl is dragged towards the pyre. Her eyes are full of panic, beyond any understanding what is happening. The whole village gathered to watch the spectacle, to see the “witch” die. Throwing rotten apples and spitting at, they couldn´t wait for the fire.

“Well, what do we have here? A witch? How…interesting.”

All eyes immediately went to the woman who spoke at this moment. But any angry reply by the folk kept sticking in their throats. Tall, clad in Iron Armor, the huge sword firmly strapped to the back, she looked up the towns folk with her cold eyes.

"We will see. I will immediately start an investigation. If there is a witch, there will be justice. If not…there will be questions asked and answers given…by you, my dear people.

An Inquisitor of the Empire has arrived.

From Bleeding enthuasist to infamous meme-build fugitive, your wanted posters should be in every meme-build police department by now!

You should try solo-shaman next and then classless Bleeding build!

As long as my Beehunters can do what I want them to do, everything is fine. And the solo-shaman is already built but has to be tested.

@Xervous
Next 3 things to do:

Update to 1.1.5.1:
No kidding. This ist the most tanky build I ever played/made so far. Sadly, Grim Dawn crashed a few seconds ago while breathing through SR 77. Tanking Kuba and Fabius together? No problem at all. With ~2.300 Armor and ~30 % Physical Resistance.

How? Well, Seal plus Wendigo Totem plus Dark One´s Gloves plus Racial Damage against everything plus very good RR/ADctH and Crit. 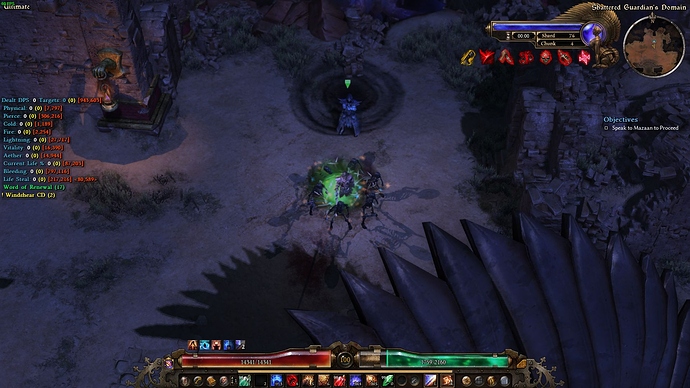 But beware!
If you get Mad Queen in Shards >70, do yourself a favor…quit. Maybe I am the most stupid pilot in this game (which is possible!) or builds, which have proccs like Massacre/Falcon Sweep do have a problem with her. She heals, she kills…I needed 4 Aether Cluster to just finish SR 72 to get the last Waypoint. 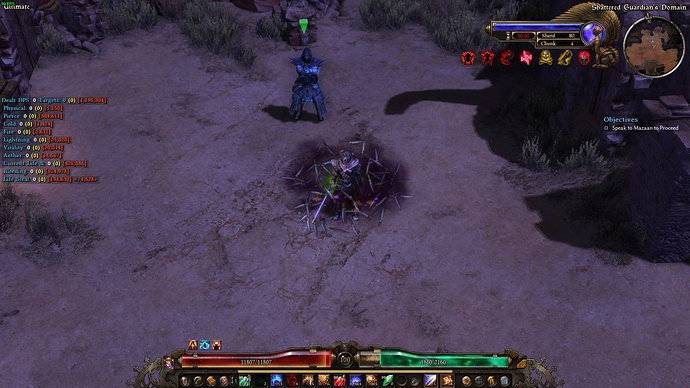 Vindicator_SR80.jpg1920×1080 299 KB
Became greedy in SR 79 when timer was low due to unnecessary deaths and stupid non-boss shards and tried Aleksander and Zantarin together. Not clever.

But SR 80…I am satisfied. I would call this a very safe and easy to play build for farming SR 75/76 without problems, as long as Mad Queen doesn´t show up.

bloodrager is an powerfull set nice build but inquisitor is usless pick here for me.

bloodrager is an powerfull set nice build but inquisitor is usless pick here for me.

Bloody Rhylthar wants bleeding in every class, so now he has the whole collection.

Only the Seal plus the massive Racial Damage the mastery gives make it possible to literally destroy Kaisan and Benn’Jhar while facetanking them.

Edit:
Added another Screenshot in starting post and some more explanations why Inquisitor really helps here.
I will wait if @romanN1 has the patience to test this in Crucible (many thanks in advance

) and then @Stupid_Dragon gets something for the Compendium.

i made 2month ago the same build but soldier + 2h ranged

Thanks to @romanN1 I have a video from Crucible, ~6:49 and seems very safe:

I took my time and brought this build to SR 85 (Screenshot in starting post).

Did I have luck? Sure, no Mad Queen from 80 to 85.
Did I use pharma? You can bet on it. At very latest from SR 82, when Aleksander started one-shotting me, Shattered Cronley did his tricks one me and so on. Aether Cluster, Aetherward Oil, Health Buffs…but still Reaper, Benn´Jhar, Kuba and, to lesser extent, Moosilauke are easy going (Zantarin, too…but double Zantarin is not so funny anymore).

Not bad for a meme-build.

Did I use pharma? You can bet on it.

Nothing wrong with it imo, everything over 75-76 is additional challenge so why not use it or shrines if you have troubles?

Build is not meme at all btw.

Glad to hear that. Than maybe I will try to go deeper in the future.

(Though Aleksander is a real pita, too…but manageable if I didn´t get too frustrated…)

On Pharma:
Yeah, this build is tanky but some extra insurance or help…in shards so deep, I will always do it.

Build is not meme at all btw.

Thank you, really appreciate that from you (which goes much deeper in SR than I do).

I think, this is the most suited build from the bunch from my Bleeding Builds for SR. I brought Trickster and Death Knight to 80, I think Warlord and Witchblade should be capable, too. But not so “easy” as this one.

If I could spare the time in the future, I will perhaps play Main Campaign with this one to open up and try Mogdrogen and Ravager. I think, this build may have a chance to beat them.

Glad to hear that. Than maybe I will try to go deeper in the future.

With new waystones it’s possible, hardest bosses like Grava/Kaisan/Kuba/Gargaban/Outcast got lower spawn chance than meme one like benjahr or iron maiden so it’s realistic to have decent combo 5 times in row.

Btw. Did you consider bleeding elementalist? I think mirror + maiven can works well for defense and you have naturally better OA with it so you can bump up DA.

I think, this build may have a chance to beat them.

I think that too, Mogdrogen should be very easy, just overcap light resistances into the air, I saw some “classic gd, no components no cheats” warder beating him so you know

Btw. Did you consider bleeding elementalist? I think mirror + maiven can works well for defense and you have naturally better OA with it so you can bump up DA.

I have a Bleeding Elementalist: GRIMTOOLS…have to bring it to 75 first.

But I think, you mean Druid, and Yes, I already have one: Bleeding Druid
Maybe SR 80 possible, with support from Wendigo Totem and Dark One´s Grasp. Though no such defense as Seal.

Edit:
Only killed Mogdrogen on my Trickster but on Elite. Ravager I made the wrong choice, I took the one with Aether Damage and Fumble (…of Minds?). And Trickster didn´t have enough tankiness/ADctH to beat him.

My mistake, I meant Druid ofcourse, always confusing him with elementalist

Only killed Mogdrogen on my Trickster but on Elite.

In past I’ve killed him with legit unfinished vindicator, under 100 level and no good components, just stacked lightning resistances + ultos amulet, probably every concept can beat him with just stacked resistances.

Ravager with Fumble is “of souls”, I always choose of Minds (hardest meele hitter?), gotta check other archetypes in future because my experience with them is poor, only killed them once with my legit characters to get all helmets for collection.

Insane new toy (too good?), so much more damage. I am very very rusted at the moment in playing Grim Dawn but I brought this toon to SR 85 before and now it is even better (tankiness with Totem/Seal). Only played SR 75/76, easy going…

Edit:
Big thanks again to @romanN1