Creds due to: John smith for demonstrating the sheer power of stormbox, the OG veterans for being so supportive (you know know who you are), and da1andonlykitty whose devotion pathing I’m using.

Special shoutout to…: Mad_lee, strukto for all the TLC they’ve shown me 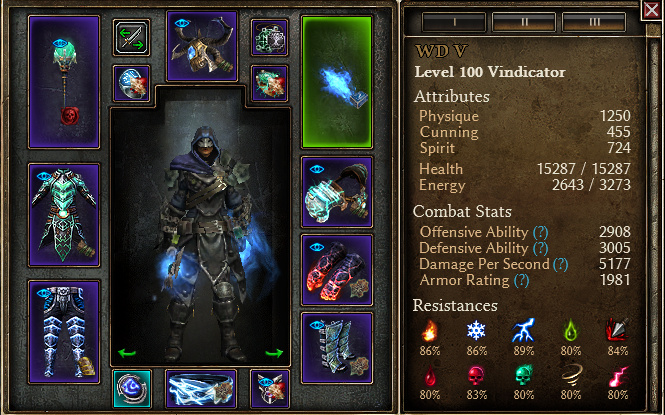 ^Before all procs. Word of renewal and inqui seal are, however, active.

Hey guys, sorry for the hiatus. I had/have lots of life to do and couldn’t afford to be distracted by the forum. Activity will be intermittent.

Decided to announce my return with a new build – the Allagast Vindicator.

AFAIK, this is the only example of X% CDR on a temporary buff that I know of. What makes it crazy good is that this CDR affects the inherent cooldown of deadly aim itself. In other words, assuming that the 10% CDR to deadly aim is the only source of CDR I have, the downtime of deadly aim will be a perpetual 4.5s, instead of its usual 5s.

I’m not 100% sure, but I’m also fairly certain that the cooldown of all skills used during deadly aim will not increase once deadly aim wears off.

Once you factor in the 200% lightning damage bonus to deadly aim, it becomes the most powerful tool in the allagast vindicator’s arsenal.

As many of the veterans are aware of, the formula for X% RR is as follows… |Target’s resistance – RR| * (X% RR)

Levelling by madame spanksalot, written by sir spanks
With the changes to veteran, levelling with the inquisitor is an absolute nightmare.

What I suggest is using the shaman instead. Max out raging tempest and maelstrom ASAP. Get storm totems too. And use deathchill bolts as your spammable skill.

Devotions
Pretty standard lightning devotion, with the exception of revenant. With the high aether/lightning conversion, skele’s actually do quite a bit more damage than elemental storm. Net loss of 7 RR is totally worth.

Itemization
1. Offhand
I think the enslaved wraith is BiS. Definitely beats out yeti’s horn because of the higher base %lightning damage.

As for as affixes go, sandstorm is BiS, ‘of sands’ is pretty good too. Any other relevant affixes is just a nice bonus.

2. Gloves
Cindertouch > Light’s defender by miles. Fire/lightning conversion benefits both wind devil, and the elemental damage to SBoE from the medal. Cinderwind is also a massive damage spike. Then there’s OA and crit damage too.

Hey Spanks, welcome back to the forum

Damn, that’s a way to make a splash. We know that Vindicator is strong class, but that’s really impressive time for that concept. Also playing naked Crucible requires special talent, but also dose of masochism

About forum, I understand you can’t be regular as before, but you know you’re valuable member!

Valuable at bringing in more nerfs to the base skill…

now do an elementalist.

Which base skill are you referring to?

Which base skill are you referring to?

He probably means that in last few patches were nerfed some skill’s base damage like Storm box. So I doubt they will be further changed.

They synergize well because all these 3 things causes your dps to go up when more enemies are clumped together.

TBH, you could increase DPS more by shifting points from inqui seal to arcane empowerment, but I ultimately chose not to because of low fire res.

Not Storm Box but Storm Totem has seen nerfs to the base skill. Wind Devil has also had some of it’s Lightning damage in Maelstrom shifted over to Electrocute in the past I think.

Looks like a great build spanks, good to see you’re back and posting.

Nice build btw.; I tried to make a more trozan focused allagast MH a while ago but it never even closely reached the levels of this beauty…

Box+devil+totem concept will always be strong unless Crate intentionally makes it unplayable. I even made an all green meme spec that could clear cruci in 6 mins lol.

god damn, you are back!

Me yesterday: storm box has been slapped around enough to invest into my allagast without nerf anxiety during next patch

Love me a SB build. That boom when you cast it on mobs and they just vanish:laughing:

Ignaffar is more than appropriate here. The bane love is real on this forum

cool stuff, i made something a while back which works in a similar way just not allagast and the amu. I do believe you got a better fit with the items. https://www.grimtools.com/calc/YNn6YRwN

Ah, thanks for the clairfication Ceno. I didn’t know that. Will update OP.

Still though…-160% RR before revenant is pretty damn good.

While I don’t quite know the meta anymore, I think the inquis is fine. It’s mostly a support class now. You can’t really use any of it’s skills as a primary attack besides SBoE. You could consider FoI, but it is both super clunky, and the damage on it is just lackluster.

P.S. On the note of FoI…Has anyone made a successful voidsoul build? I tried making a voidsoul sentinel but the damage was abysmal.

I would rather see it’s offensive skills got buff, like FoI or RoK. Oh and there’s even Inquisitor skill called Horn of Gandalf. As FoI with Voidsoul ya have Paladin…

At first light on the fifth day, at dawn, block your ears.

Nice build. Some theoretical suggestion: I think good returns would be from cast speed investment for maxed Tether and general casting flow. Restless Remains or something. I would also recommend Shoot’s approach to casters - spamming Stormfire (from Seal of Destruction) for sustain. Or since it was overnerfed and taken away 1/3rd of its weapon damage, maybe Chain Lightning from Seal of Skies? 200/1100 health regen alone sounds a little testy…