The Tank One - 2H Melee Conjurer :

Do you want to never die (in Grim Dawn)?

Well then you must be a very wishful thinker

Luckily we have something that’s sort of close … 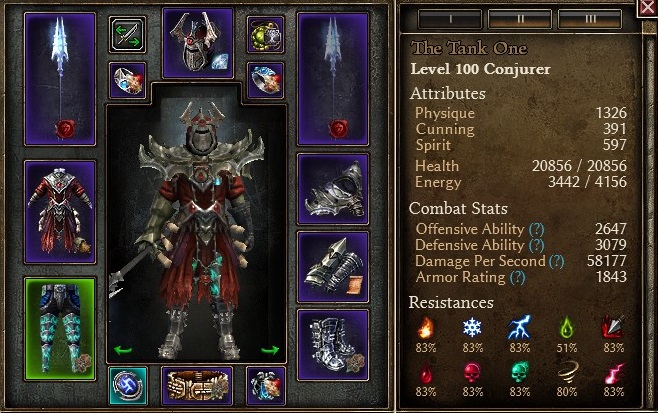 Stats w/ permanent buffs only - temp buffs are off, including: Blood of Dreeg, Tenacity of the Boar

DPS shown is Savagery (unstacked, a lot of your damage isn’t captured in the tooltip DPS) 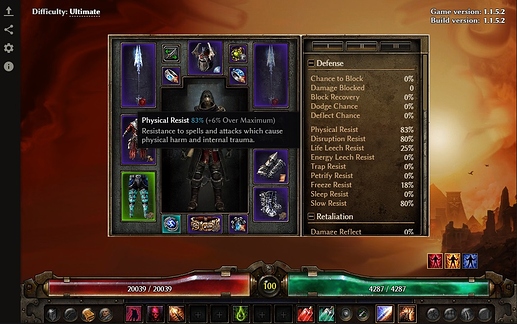 Showing physical resistance on grimtools, with Might of the Bear & Blood of Dreeg on.

No video atm, just a picture. But what can I say? This build is a TANK.
You can literally stand in place and facetank Callagadra until she dies.

Step 1: Pick a nice, cozy spot to plop down 2x Wendigo Totems and summon Callagadra
Step 2: Debuff her resistances then left-click (or whatever your Savagery is bound to)
Step 3: Replace Wendigo Totems, Blood of Dreeg, and Debuffs when they expire
Step 4: ???
Step 5: Profit

That’s right - there is no need to kite, no need to manage multiple defensive cooldowns,
no need to use consumables at all (not even health potions) - just keep smacking that Celestial

Oh, she’s enraged at 50% HP? -> No problem.
Oh, you’ve got 6x Entropic Voids and 3x Sand Tornadoes on you? No problem!
OH, all that AND Callagadra has stacked 3x RR debuffs on you? NO PROBLEMO

OK, so @Ziller we’ve got a fairly tanky character but do we do damage? Is killing her going to take forever? Are we all tank and no damage?
Ah my anonymous friend, fret not - we do indeed have the deeps. That’s right, despite our measly 58k DPS stat on our character sheet - we kill FAST.

We can kill Callagadra in 5m30s (with the tankiest spec). The offensive spec is < 4m40, but has some scarier HP spiking mid-fight.

That was my time on my first attempt with this build (and I know someone piloting it better could speed it up a bit).
Our damage from a fully stacked Savagery is very respectable, but we are really doing a lot of damage from many, many smaller sources like DoTs, and item & devotion procs. 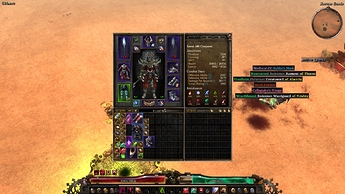 Gratz on this build! But why no storm totem ?

Gratz on this build! But why no storm totem ?

I do have a variant of this build (the caster version) that uses Storm totem and it’s good!

and there are lots of skill points I am still missing points in - I’m going 50 points into each mastery for the raw stats and even just by picking up some core skills along the way, I’ve quickly run out of points

Also it makes it simpler to pilot, if I don’t have as many active skills and shift some of their power into passives

Well, that’s arguable. You’re gimping a lot of dmg and therefore sustain. More than 8% worth of phys res. Also, gimping your other resistances as Bysmiel jewelry only got one res per piece and very low. No ranks, no procs, no mods.

Unless ofc that’s exclusively for Calladagra, then yeah, phys res. But honestly 60% would do just as well. Should get that armor absorption, too, not Ugdenleather on the pants with 60% overcap on both bleed and acid res already.

No Dying God on vitality is criminal, though.

I get what you are saying but the whole point of this build is to go heavy on the side of survivability, to the far extremes.

By extremes, I mean the ability to facetank any and all the content in the game -> including Callagadra, anything below that would be compromising the core theme and motivating idea for the build.

If you have something like 60% Physical Resistance to start with that quickly plummets:

editted x 3: jumped around between correct and incorrect results, credits to @Nery for correcting me and @klasperstanze

Also frankly, armor absorption is really low-value for this build. The Dark One’s set has such low armor, that each increase in armor absorption % gives so little total armor back and it’s inherently tough to stack armor with that set.

And remember the whole point of armor, it’s to buffer you against many low and medium hits of Physical damage - it’s a flat reduction at the very beginning of the damage reduction formula, meaning it’s very effective for small hits but very in-effective for huge hits (I’m talking 10k+ pre-enraged Callagadra, let alone post-enrage, and even her summons can do 8k physical dmg).

For really big hits like 10k or 15k hits from things like Ravager and Callagadra, it’s much better to rely on Physical Resistance - which you can’t skimp on - because that 60% is effectively only ~7% when debuffed.

You’re gimping a lot of dmg and therefore sustain.

If the build relied on a different source of sustain, rather than Wendigo Totem heals, I might be inclined to agree with you - but frankly the majority of your sustain is Wendigo Totem healing and not lifesteal/ADCTH - of which is super in-effective vs most big bosses.

For example many Celestials have 90% life leech resistance, which you can reduce to 82% with Rattosh - but that still means each point of ADTCH is only at 18% effectiveness … which is definitely not enough to sustain you vs the damage you take vs the big Celestials.

Meanwhile the The Dark One’s has 2 totems that each heal you for 11% + 1350 at 1.5x a second - thats an average of 33% + 4050 health sustain. At that point, the best way to increase sustain is to increase your max HP rather than try and get ADCTH. In this build, ADCTH is supplemental sustain because frankly it’s not good enough of a sustain mechanic to invest more into…

No Dying God on vitality is criminal, though.

I wish I could take Dying God but it’s all about the trade-offs - unless someone has an ingenious way to get it while keeping the same level of tankiness, I simply can’t afford the trade-offs in both physical resistance and OA (blue affinity is heavy on the DA but very sparse on the OA).

To get to the crazy levels of physical resistance this build achieves, I have to get it via devotions and outside of Sailor’s Guide - there’s nothing else in Blue affinity that gives it. Additionally I’m already low on the OA compared to most builds I run, and moving away from Green affinity devotions would lower that even further.

edit:
But yeah I might change around the resists (mainly in the form of augments, but maybe components) since I honestly have a bit more resists in certain areas than I need and less in others @ya1

/end long post, LOL I wasn’t expecting to write this much - hope this pile of text isn’t off-putting @ya1 - I enjoy the conversation and discourse lol

Oh snap, can you elaborate? I thought it comes last after both -% and %. I’m using Ceno’s cheat sheet as reference?

I think the crux of this discussion is individual opinion of “tankiness”. On-paper tankiness with stats like phys res etc like demonstrated here is easy to judge at a glance because it’s on the sheet. In practise, survivability has many more ingredients. Mad_lee’s conjurer pulls off DG and normal vit damaging setup without sacrificing tankiness, and can put down crate of entertainment. You could take a look there if you wanted ideas on changes to test re: more aggressive spec with similar survivability. [1.1.4.2] Conjurer of the Dark Arts - 6:30m Crucible 150-170, "naked" Crucible, easy SR 75-76, all Celestials, no greens immortal Conjurer

Not sure about the rest, but Flat RR comes first - for enemies and players.
Otherwise the -RR outcome would be far too extreme.

Impressive physical resist for sure. And its surely more valuable when taking big hits.
Did you already test your build on CRATE as well? How is clear speed when enemy count is big (deep sr e.g.) ?

I think the crux of this discussion is individual opinion of “tankiness”. On-paper tankiness with stats like phys res etc like demonstrated here is easy to judge at a glance because it’s on the sheet. In practise, survivability has many more ingredients. Mad_lee’s conjurer pulls off DG and normal vit damaging setup without sacrificing tankiness, and can put down crate of entertainment. You could take a look there if you wanted ideas on changes to test re: more aggressive spec with similar survivability. [1.1.4.2] Conjurer of the Dark Arts - 6:30m Crucible 150-170, "naked" Crucible, easy SR 75-76, all Celestials, no greens immortal Conjurer

I agree, but granted I am explicitly expressing my goal is to ‘facetank’ stuff like Celestials.

Mad_lee’s build can kill them but it still requires kiting and definitely can’t facetank Callagadra (I know, since I’ve played his build and his guide was one of the inspirations for why I like The Dark One’s set so much)

Impressive physical resist for sure. And its surely more valuable when taking big hits.
Did you already test your build on CRATE as well? How is clear speed when enemy count is big (deep sr e.g.) ?

I haven’t unlocked Crate on this character yet, but I’ll be sure to post updates when I do. I expect Crate to be fairly simple, since I’ve had less trouble with Crate than Callagadra in the past (moves are more telegraphed, can be lured away from most of his pets, and on builds that have high single target damage but less AoE - I don’t make as many clones of his crates)

Clear speeds for large enemy counts is not really impressive due to lower amounts of AoE, but it’s decent since Dark One’s Wendigo Totem is a good AoE skill and the procs from Nightbringer/Eldritch Pact contribute a lot. It’s overall still good if you can pilot well with the debuffs and keep Savagery stacks up in between packs but it would definitely benefit from having a strong vitality damage movement skill (like the SR augment recipes) and maybe moving points off of Second Rite and investing into Sigil of Consumption to team up with Wendigo Totem.

edit 2: Oooh, but the caster variant of this build has great pack clearing speeds - it’s similar to most Dark One Conjurers (just tankier but less damage) and has plenty of AoE skills like Storm Totem and Sigil of Consumption

Not sure about the rest, but Flat RR comes first - for enemies and players.
Otherwise the -RR outcome would be far too extreme.

Fair enough, just wasn’t sure if you had encountered some of the options presented there

Thanks, but damnit even Ceno’s cheatsheet is wrong?!!! My good’ ol reliable source I used when I first started

But I’m glad I have the right information moving forward