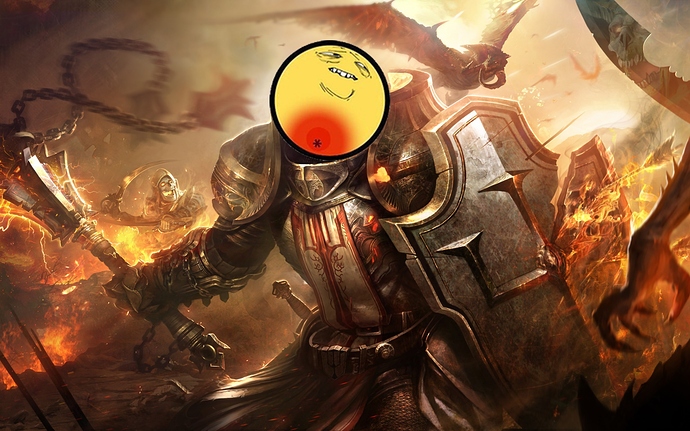 **Credit for the picture goes to @Safarel. Thank you, man!

I’ve had an idea to make a resilient and tanky Paladin caster for quite some time now. Obvious weapon of choice is Fire, however there are quite a few problems with this: first of all, by taking Aura of Censure we are missing out on huge damage boost from Divine Mandate, secondly, Paladin’s offensive spells aren’t exactly impressive when compared to Arcanist’s or Demolitionist’s arsenal. After quite a few hours of trial and error I have finally come up with something powerful and somewhat unique.

Decided to revisit this unusual caster. And made it even more weird (and stronger)! Together with Acid component skill now cuts thru the hordes of monsters Guardian’s Gaze!

**Craft for Stun Resist. You can use Titan Plating in Chest for deep Shattered Realm.

Biting Blades on a Fire build? What in the meme?..
Credit for the idea goes to @thejabrixone. Biting Blades + Oathkeeper’s belt combo gave build the final push it needed. With all the conversions Fire damage on Biting Blades is higher than the one on Stormfire (from Seal of Destruction component). Plus BB have high weapon damage and hit twice so ADCtH is off the charts.

What about Arcane Harmony pants? Blazeheart? Anderos’ Amplifier?
All those items have been tested before I came to this setup. And current setup is better on all fronts.

Itemization is built around supporting two build’s main damage dealers: Judgment and Rune of Kalastor. It also gives us neat converts to utilize Biting Blades. Build is very tight on skill points, so some sacrifices had to be made. Devotion map is classical Fire/Burn powerhouse enabled by flat resist reduction from gear/skills.

For leveling check out multiple leveling guides posted on this forum. This is the endgame build and it works as advertised after you equip all the gear/skills/devotions exactly as in Grimtools link above at level 100.

In Crucible build facetanks almost everything. However, you have to watch your cooldowns and be sure you are standing inside the Seal on hard waves.
In Shattered Realm you are fine as long as you can aggro abuse Boss chunks. If you have failed and aggroed few bosses, it’s better to die and try again so you can fight one or one, however, versus some boss combinations you can kite.

General with Ascension up 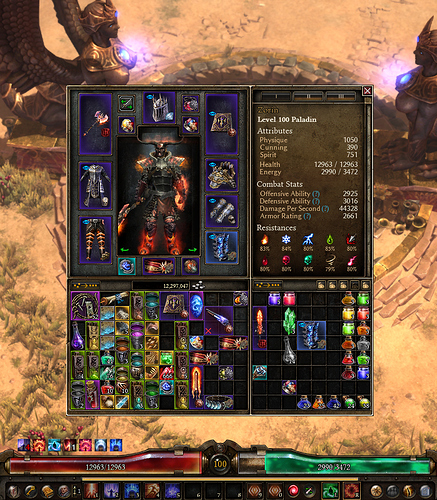 Magical (with Ascension up) 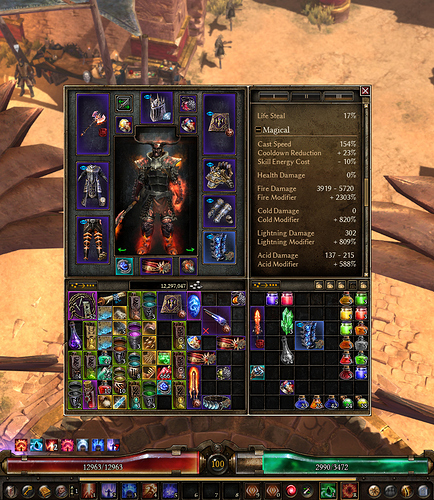 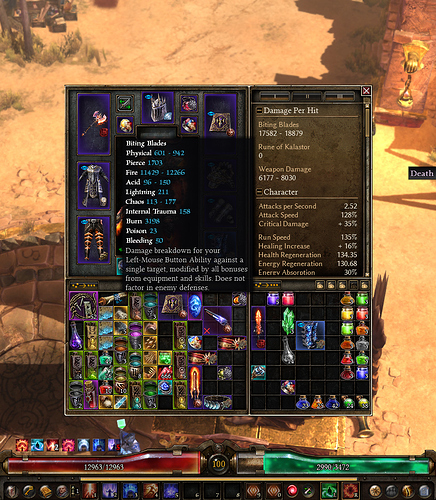 Defense (with Ascension up) 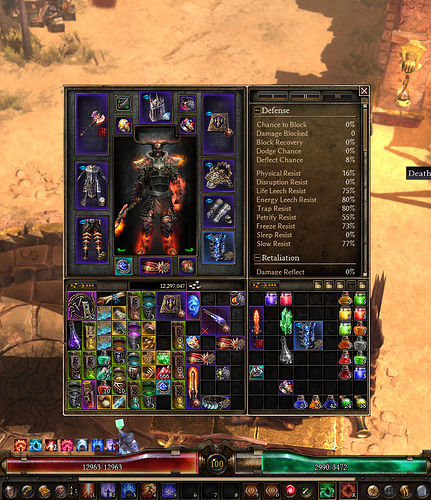 I want to thank @thejabrixone who gave me the idea to use Biting Blades together with Crimson Lotus belt. Also shout out to all the best builders from our little builders chat, you know who you are, guys, much love, your builds always motivate me to create something new.

Like the build and performance it’s nice. So Paladin isn’t that tough? That’s a surprise.

Things were going swimmingly untill they weren’t at boss chunk of Shard 76.

Thanks, that’s hella fast, sick piloting as usual. Added to the op.

@omnitrio kindly agreed to test this Paladin in SR 75-76 and even recorded a video, enjoy:

BB on the spec actually makes perfect sense. It was something I theorycrafted ages ago, but never got around to testing because of the lack of burn damage on tome. (It was also an infernal knight SB)

Also, I didn’t see you mention any helm alternatives in the thread, so…

EDIT: OP’s image also looks like an orange who’s on the verge of an orgasm

Since you have bumped it I might test both helmet options today. I am 99% sure it will be impossible to beat +1 to Oathkeeper and +2 to AoC (that’s -3% rr from just one item)

His anus is on fire because he realised he has been fooled by the stereotype that all Paladins are predominantly tanky. Seriosly, for some reason making this concept tanky and consistent was a bit of a challenge.

Regarding justice helm, i’m also a little uncertain about it.

At this point build is pretty balanced and consistent. It’s pretty fast in Crucible and pretty reliable in SR 75-76. But I will test it of course!

With virtue ammy, it’s 3.75s downtime on ascension, which is basically half the current downtime.

I’m really curious about the results, so thanks in advance for testing it

So you want me to test Virtue ammy + Virtue helmet? Because I am kind of losing a lot of skill points with that setup that I don’t know how I can recuperate

yeah, it’ll probably be worse, but i wonder if the massive boost in %damage can offset the loss fo skill points.

So I have tested Virtue + Amulet. Two runs, so not really a sample, but I had troubles surviving for some reason. Died on 160 at the first run and got a laboured 6:50 timer on the second run with Resistant mutator on 160-170.

Definitely does not feel like more damage, feels like a bit less damage and worse survivability for some reason.

Yeah. Loss of skill points must be it. Thanks for testing it though!

Decided to revisit this unusual caster. And made it even more weird (and stronger)! Together with Acid component skill now cuts thru the hordes of monsters Guardian’s Gaze!

Rune of Kalastor synergies very well with Judgment as the latter can gather nearby mobs toward the radius of the former. It’s been so fun and hilarious seeing mobs dying from this deadly combo! Excellent farming skills.

Yes, if you transmute an item you lose the completion bonus.