Hi. I really want to make an aether pistol gunner with solid SR65+ results. This is not that build. But, while looking at aether % bonus pistols it did remind me that Mythical Arcanum Sigillis was a thing. And poor @Crittrain had spent a week+ of time and much of his sanity trying to find a build for Phasebreaker in GD discord, so pass through elemental seemed like a solid fit despite the limited skill bonuses. Didn’t see a forum build with the pistol yet so here we are.

Pass through firestrike is well documented at this point, with hilarious explosive strike and brimstone scaling via multiple dagallon builds and even a previous quasi-elemental firestrike with Plasmo’s MI run. I’m a build theme purist at heart, so I tried to specifically balance out elemental damage. Lots of opportunity to take it into different elemental directions if that’s your jam. 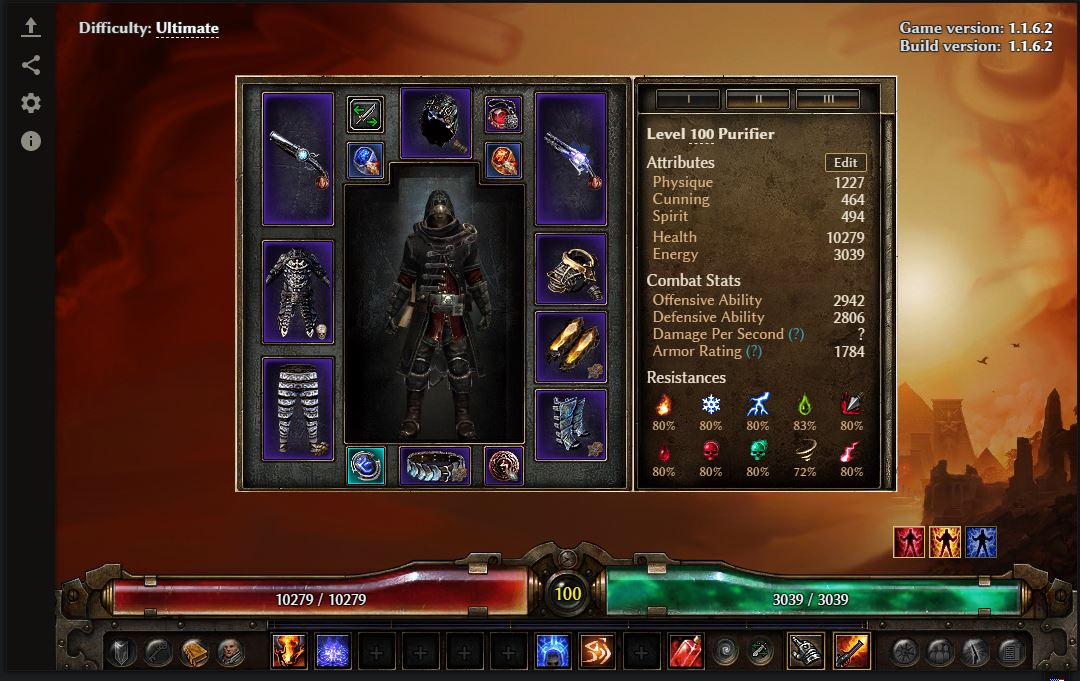 Above is the damage focused variant @Crittrain and @romanN1 used for Crucible. I tend to go more defensive for SR but will be pushing the setup tonight to see how far it can comfortably go. SR65-66 farming is a breeze unless you’re a derp and manage to early aggro mad queen and then I hope you’re a better player than I am.

Gear Choices! (I’d put these as mildly optimized. I have not made a spreadsheet, nor have I dumped hours into this character yet to play test. Unless we get some bitchin aether pistols in 1.1.7 I’ll probably focus on this)

Helm + Armor + Shoulder: Bonemonger is my favorite Inquisitor gunner set at this point. Gives us elemental support and that QoL spammable seal for pain free repositioning. Also makes sure we hard cap seal for defense

Necklace: Initially had full bonemonger set here for -10RR, but otherwise the necklace doesn’t give us much. No + skills and we don’t really need the attack speed. So now running the firestrike standard M Tainted Ruby of Gar’dal for +1 inquisitor and the important + brimstone to get us into 6-8 fragments. Sadly this means boring blue seals on the ground.

Guns: Hard set for the build if you want to stay elemental focus. Mythical Arcanum Sigillis converts the chaos and adds some flat, Phasebreaker gives us pass through on half our shots to scale AoE to the moon. Double seal of the void gets us to 92% WPS.

Rings: I went for Elemental Harmony set here as they give useful stats across the board and the proc is oh so pretty. Worth testing is the single/double jaxxon setup for more piercing shotgun shenanigans.

Pants: M Mageguard Legguards only give us cold %, but allow us to cap seal. Aether resist is helpful as well and hp is hp

Belt: M Scales of Beronath with mostly all stats we want. Could test a +1 demo belt here and/or conversion from pierce to fire for more flat, but would have unbalanced elemental theme.

Devotions: Elemental focus, so I skipped all specific RR (110 + 20%). Even with this fire damage comes out highest, so going for Solael’s Witchblade is worth testing. DA needs help and purple needed for seekers so we go wolverine, and leveraging Abominable Might for the huge converted chaos flat. In SR or campaign I’d set might proc to stormbox because storm spread is not consistent enough, but Crucible has enough mob spam that apparently uptime is still great. Basically lots of options to play around with here that will take awhile to document out.

Crucible runs
Thanks to @romanN1 ~6:03 as I don’t play crucible. My understanding is this in not consistent survivablilty, but I don’t think that gets talked about much around here
https://www.youtube.com/watch?v=IvUWdVuhS_U&

SR runs
I’ll grab screencaps tonight, or video if I get off my ass to record my poor play

Leveling Guide
This is not the build you’re looking for. My very petty complaint about all the new AoM and FG sets are not having lower tier versions, so often builds can’t be properly played from 1-94. @malawiglenn is your dude for first character builds.

Callouts! @Plasmodermic for his earlier work and reference point for next things to test, @omnitrio for his gunner love and making me realize bonemonger was a thing when I came back from latest break. GD discord peeps for various input and previously called out @Crittrain and @romanN1

Thanks for letting me spin it around, much more enjoyable then deceiver

My understanding is this in not consistent survivablilty, but I don’t think that gets talked about much around here

All about that glass cannon meta

Nice build you made!

I like this rings a lot and overall very sound gear selection, interesting map with Magi, Seal/Censure almost capped are also nice. Build have two apparent weaknesses though, lack of Ghoul as safety measure and low Slow resistance, which means in certain situations less damage and less AdctH.

Figured devo path would be most controversial. Ghoul is definitely an option, but I’ve tried to wean off of it on most of my builds if I’m not running CDR as well, so just personal preference there. That said, just realized there is a rogue point in green crossroads that should drop into first point of leviathan for cold flat. This’ll be where most of my testing times goes.

Low adcth hasn’t felt horrible since slotting bane, but agreed never hurts to stack on more. Was definitely noticeably lacking before that.

edit: forgot but will update post, you have helm and both rings to craft for slow res to cover some of that gap

@malawiglenn is your dude for first character builds.

Anyway, I’ve been really struggling to take this baby though 75-76 SR, because bosses just evaporated me. Decided to give a spin to a rather old bunker devotion setup that purifiers used back in AOM. And, well, it works. Cleared 76. Damage loss is actually not that big, and it tanks… boy does it tank with 4 defensive triggers. Just keep some aether clusters for rare moments when you’re down on all defences at the same time. You’ll also need to move some points into cunning, because this doesn’t run Hawk.

Oh as posted it’s absolutely awful to play in SR imo. I play much tankier builds out of preference, and this can indeed be made much safer, but wanted to see how it could be pushed for damage for once.

Still a fantastic build. I’ve been missing elemental purifiers so much.