Purifier (Inquisitor+Demolitionist) is one of the classes that exists, since AoM expanison. Both classes supports ranged playstyle and deal elemental damage.

Demo have the auto attack replacer-Fire Strike, while Inquisitor posses Weapon pool skills.Both classes have attack speed. Defensively Inquisitor should be the important class, since Demo doesn’t have much to offer. Inquisitor contrary is support class, with skills like Censure, Renewal and Seal.

My guide is natural continuation to build diary posted by @x1x1x1x2 DW Firestrike Purifier: A build diary from Normal to 170 Glad 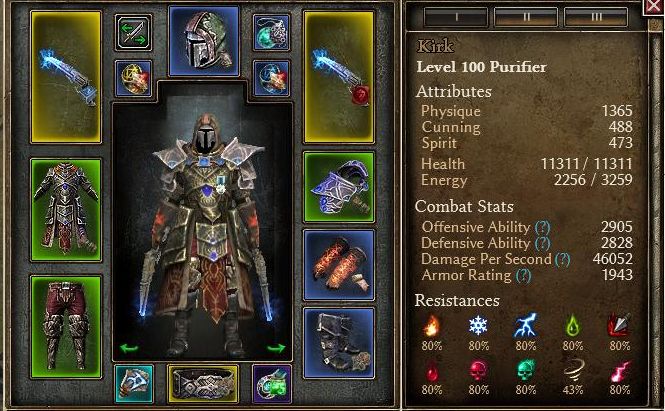 Ranged playstyle is not very popular at the moment and one can argue is weakest. As whole idea is to shoot enemies in distance and kill them before they come. In reality, especially late game with high density, you’re basically melee shooter, you shotgun them in close range. Also ranged weapons roll lower damage. Unlike melee, where DW is better, here DW pistols is not, compared to 2h Guns.

Our main damage dealer.It is auto attack replacer,it scales with attack speed and triggers WPS(weapon pool skills) Should invest as many points as possible, other modifiers are according to personal taste. Static Strike deals tons of damage, but is random proc.

It’s used utility skill. First nod is very good for the DA shred, but don’t have points to use it more generous

Elemental RR, super irritating, but will be changed probably in next patch

Our defensive main skill.Damage absorb is nice,also have offensive element

Our healing skill,defensive ability is also important,since the build doesn’t have many sources for it

Put FS on right mouse key and move to left. Cast seal beneath you and shoot enemies. Use Box+Flashbang for debuff and mines for RR. Don’t leave seal, unless is super necessary. Heal with Renewal.

Decide to play against Vala, super nasty boss. She have high lightning resistance and can absorb damage.

Crafted gear are the yellow items:

Stats to aim for:

Attributes : cunning to equip pistols, everything else in Physique

I wanted to test devotion map with some weird route using Tempest.
Also Ultos as T3 constellation. Used Revenant for utility.Mandatory constellations are:

You can go full Dying God,if you want. For leveling you need damage proc early on, like Tsunami or Elemental Storm. Also super good is Bat.

Since AoM not many things have changed,so stick to guide by x1x1x1x2. Fire strike allows you to use the same skill efficiently both for leveling and end game.

Just remember to keep resistances high and DA number, that are not crittable by bosses.

You can select fire version, but many enemies are crazy resistant to it and Bastion of Chaos is excellent place for speed leveling.

Or you can choose from compendium. Not a lot of DW Purifiers are posted in FG, so most are sadly outdated

With extensive build like yours it’s easy to do it

Why not maxing static strike if you are going down the lightning road?

Nice work with the guide

Why not maxing static strike if you are going down the lightning road?

Nice work with the guide

I don’t like RNG of attacks, but yes is solid advise. Maybe is better to swap the points from Explosive Strike to Static ?

Well you already have lots of RNG in attacks. Crit chance, spread in weapon damage, chance to proc WPS & devotions…

Well you already have lots of RNG in attacks. Crit chance, spread in weapon damage, chance to proc WPS & devotions…

So the gain of the skill is greater than the investment

Did you try with arcane sparks for energy leech btw?

So the gain of the skill is greater than the investment

Did you try with arcane sparks for energy leech btw?

I tried spark, both methods have flaws and require some energy potions sadly. Ectoplasm increase energy pool, which is low for auto attackers.

My math was different

In your version I gain around 40 flat damage in the expense of 11% WD. Since my WD is decent, thought that is worth it. Also not sure of mechanics, but is Static Strike proc affect Exposive ? If it does, than this spread of the points is optimal.

Static strikes adds that damage to regular Fire Strike, it is not a separate skill like Explosive strike.

Perhaps Stormserpent chest can be good for pierce to lightnign damage conversion but that has nothing for patch 1.1.4.0 to do…

Nery, any updates to this? Especially a nonbudget Dagallon’s build?

Nery, any updates to this? Especially a nonbudget Dagallon’s build?

About this build it could be made little differently for example Empowered Essence needs to be removed.

Thanks for the reply! I think you may have misunderstand me. I’m asking if this will be the same in 1.1.6.2 patch

Welcome to the forum!

If you want to level ranged, Purifier is the right class for it. This guide is little outdated but still you could probably find something useful.

just wanna ask why do we need the first node in dying god? it adds vitality damage, does a purifier need that?

just wanna ask why do we need the first node in dying god? it adds vitality damage, does a purifier need that?

I don’t quite remember. But if your route have 54 out of 55 points and you have one spare point, you can take something providing OA or DA. Dying God’s first node have some OA.