Purifier (Demolitionist / Inquistor) is because of the synergy between Fire Strike and the Inquistor ranged skills one of the “natural” classes for ranged builds. However, while the Build Compendium X (Forgotten Gods) - #23 by Stupid_Dragon has some endgame builds, the Beginner build guides Compendium (for AoM + FG expansions) has (only) two Purifier builds: [1.1.9.0] Beginner Storm Box + Stun Jacks Purifier from scratch (caster) and [1.1.3.1] Budget Lightning DW Ranged Purifier (dw ranged, but slightly outdated).

None of them is for a two-handed ranged character, and i.p. none of them uses the faction gun The Desolator. Unfortunalely, the complete two-handed ranged beginners build section is currently rather empty and has only one build listed: (a Vindicator) [1.1.2.5-1.1.9.1] Beginner's Lightning Vindicator caster, who is unfortunately also outdated. The intention of this Beginner’s Budget Build is to alleviate this shortcoming and provide some levelling advice for such a build. And it was also a possibility for me to bring a two-handed ranged character to level 100. As this was my first Purifier, except some shortcomings/errors in the levelling phase.

Using a two-handed ranged weapon for the early levelling has one advantage and some disadvantages. The advantage is that not getting hit as you fight from a distance is one of the best defensive strategies in the beginning. The disadvantage are that the damage is lower compared to melee, the area of effect (AoE) damage (later one of the advantages of the build) is rather low without a high skill point investment and good guns are rare. Around midgame, the invested skill points together with a good Ugdenbog Arcaneweaver shifted the impression and at least the AoE damage felt good. The build however was always a bit glassy and died more often than expected. Especially heavy physical hitters could be painful (e.g. projectiles which brought Death from Above).

Only self-found equipment and self-found crafting materials were used while levelling. Also, no mandates were transferred, writs were bought as soon as possible. However, all necessary blueprints were already found with earlier characters. The character was played solely in 1.1.9.1. 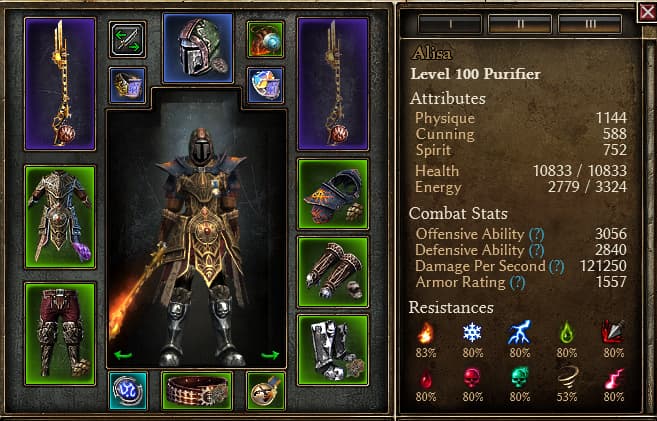 [Fire Strike, all permanent buffs and Word of Renewal.]

Using other(!) components and nacked gear, it is already possible to somehow cap all resistances skeleton character (= without affixes). However, the components choice is more restricted and the offensive ability (OA) is rather low. Gear affixes should provide skill points (e.g. of Destruction with its +2 to Explosive Strike), resistances and increased offensive ability.

Go Farming: The character is able to farm totems (and some challenge dungeons and some nemesis and (low) shards in the Shattered Realm) in Ultimate.

Other Purifier endgame builds can be found in Build Compendium X (Forgotten Gods) - #23 by Stupid_Dragon.

Thanks for the build, we definitely need one around the Desolator gun.

Only self-found equipment and self-found crafting materials were used while levelling. Also, no mandates were transferred, writs were bought as soon as possible. However, all necessary blueprints were already found with earlier characters. The character was played solely in 1.1.9.1.

You could just change relic and the character would be truly SSF all other things are easy target farmable I believe (high level component blueprint only require for example 1h of farming totems after leveling my character to 100 - they have higher chance / priority or something like that over other blueprints).

Devo proc with WPS - I made some tests once and I think Storm Spread (with 4 projectiles) was the best, followed closely by Chilling Round. Bursting Round I rated the worst because it’s just 1 hit / proc chance on a boss with no minions.

Maybe 1p for Deadly Aim could be found somewhere?

If you play long enough, you will have the blueprint and it is self-found.

But to be honest, all other relics were somehow not that interesting - visible also in the fact that I used the first early one until the change. And not using Korvaak’s Deception would have required some gear farming to fill the holes - something which was not very high on my “want to do” list (e.g. the character still uses a level 84 armor).

The most likely “cheap” alternative would likely be Conflagration (but than, why not sinply use the skill for levelling) or Annihilation (well, also already level 70). One possible “lower (well, also 70)” level inquistor relic could be Bane.

Devo proc with WPS - I made some tests once and I think Storm Spread (with 4 projectiles) was the best, followed closely by Chilling Round. Bursting Round I rated the worst because it’s just 1 hit / proc chance on a boss with no minions.

I think the assumption here is that all Storm Spread projectiles hit, or? And I assume that with Bursting Round also the AoE hits might trigger the devotion proc. Therefore the used binding - as the character is mainly intented as campaign map farmer with lots of enemies - where one Bursting Round hits multiple enemies. If this assumption is wrong, a different binding would obviously make more sense. For a single boss killer I would also have used a different binding.

Maybe 1p for Deadly Aim could be found somewhere?

Thought about it more than once - as more or less the last 2-3 skill points are free - but than 2/12 Deadly Aim did not looked that promising (the same applies to Arcane Empowerment). So I decide to go for the marginal higher proc change for Bursting Round.

Also what’s the deal with not finishing Meteor? ; )

As I finished the devotions - I had no free skill to bind Meteor. And afterward, I simply stuck with this decision. And I think that it will be not that helpful as perhaps expected (well, can be wrong here).

Killing the typical trash mobs happens rather fast (beside some human high resistance enemies) - so that the proc would come to late for this kind of enemies - as you have already moved on. The additional damage would likely be nice in boss room encounters, but there the build has other issues (you cannot really move that much as Adcth is the main sustain - but certain enemies cannot be facetanked as their projectiles kill you with one hit).

But I think your question and @fishy image comment make it rather clear that Meteor might be a good alternative for the last three rather free devotion points.

ahahah, I am just dying seeing that picture… could post it on meme tab and get millions of likes.

Take torch but not take the skill from tourch ???
Man this is how you play GD in 2021. LMAO

a bit offtopic, but what fire strike build is the best nowadays to farm at least all ultimate dungeons consistently?

What about between two handed and dual-wield? What are the main differences?

Desolator Purifier: Tanky from Justicar set, strong leech but build is little bit slow because there are not many aoe to clear big mobs.
Two DW melee Variant: Same as the above.
I remember there is a Nex and Ortus cold fire strike somewhere but cant find it any, pretty viable for cruci and SR75-76 farming

Cool that you posted this build! I tried leveling it but wasn’t fun honestly. Ranged builds (auto-attackers) feel inferior compared to casters. But Desolator is faction bought recipe weapon, so can be used in budget setups.

Will you finish this build?

u use so much green, why not also use Ugdenbog Arcaneweaver, 100% Chance to pass through Enemies to Fire Strike can improve a lot.

sure, u are right.

The budget build is finished, some potential endgame builds are linked or can be found in the corresponding section of the compendium [edit: the idea behind a budget build to present a path to level 100, from this point on (or even a bit ealier - depends on the gear available) you should start to develop your build to the intended target build]

well, the Ugdenbog Arcaneweaver is used as early as possible for levelling just because it has pass-through - also to get the player used to this kind of gameplay before moving to the final (standardized) rifle

Hello, big noob here. I’m following this build in veteran, I’m at a point where I need to choose between Kymon’s chosen and order of death’s vigil. Any tips?

The final build uses an augment from Kymon’s Chosen, so that is the choice you should make.

thanks, I did see Cult of solael there but somehow I thought that Kymon’s chosen and that were different things

thanks, I did see Cult of solael there but somehow I thought that Kymon’s chosen and that were different things

I’m at a point where I need to choose between Kymon’s chosen and order of death’s vigil. Any tips?

And I thought this had clarified it

- happy levelling (the augment itself is nice but not that important)

Kymon’s Chosen were selected mainly for thematic reasons (Inquisitor build), even if the final build also uses one augment from this faction.

sorry for the (maybe stupid) question how do you remove devotion points (as mentioned in point 3 of this build)?