The motivation behind this leveling journal/guide is mainly 1.) I haven’t used Stun Jacks until playing this character and 2.) I haven’t made a Purifier. I chose Purifier over Elementalist because of better survivability options (more on this in the Build Introduction) and this Monster Infrequent which benefits both Storm Box and Stun Jacks, possibly making it viable to level with both as main skills. Of course, the easier way to level is Blackwater Cocktail or ranged Fire Strike but there are already plenty of guides/builds that showcase it.

This beginner guide will assume that you have both Ashes of Malmouth and Forgotten Gods expansions. The main items for leveling and for early farming (Monster Totems and Skeleton Key dungeons) are exclusive to the expansions. With that being said, let’s journey through Cairn with lightning!

Begin with the end in mind

There will be 2 phases for the end build: the easy-to-get version and the “farmable” version.

This will be divided into character levels and areas so you know what to look out for and what to do next. The early levels are not set in stone; it’s just what I ended up when clearing the area of interest. If the section does not indicate an area, it means that it’s a key level (usually major item changes).

Here are some videos showing what the Farmable Stormrend + Stormserpent build can do so far:

I am quite surprised at how the build performs since I never played both Stun Jacks and Purifier before (my experience with Demolitionist was with an Ulzuin Canister Bomb Shieldbreaker and for Inquisitor was with a Blind Assassin Pierce Infiltrator).

There are optimizations for the leveling and endgame Devotion paths for sure, but I’ve chosen the ones that made sense to me at the time.

The next steps for the build will be:

I might try Crucible as well, but the build needs to be itemized with fully-endgame gear and components, but still keeping Stormrend + Stormserpent Set. We’ll see how it goes.

Here are endgame options past the items that I have:

INTRO Building around SJ is a double-edged sword - on the one edge we have great damage, on the other - no WD or ADctH on them and very strange projectile spread. But nothing is impossible, actually

Hello again, this is the second chapter of my Dryad builds, this time 100% life leech-free. Previous episode : I tweak another build with my new favourite devotion trio, the spam Stun Jacks purifier, another build relying on skills with no leech or %weapon damage whatsoever. Compared to the druid, it has half less CDR but it’s a lot tankier : we have high armour and a hardcapped Inquisitor Seal in which we comfortably facetank nearly everything. However it’s a lot less bugdet. :arr…

Hi everyone. Want to imagine very strong and a lasting mage. Can undergo crucible standing still in the center of the arena. Takes 85 SR. Can go 150-170 without auras crucible. Large supply of armor, seal 22/12, blast shield, ghoul, diamond, large resistance, all this allows the character to survive in difficult situations. 17% lifesteal allows you to regenerate health due to the chain lightning skill that has 70% of VD. I recommend it to all, both beginners and experienced players. It’s nice to…

Thanks to @Ulvar1, @Stupid_Dragon, @Nery, @Monceaux for their Beginner Guides. These helped me to figure out things when I was starting out in Grim Dawn. Thanks also to @RektbyProtoss and his many different SSF Beginner Build series for some ideas on how to build characters from scratch. And special thanks to you for reading, I hope you’ve learned something from my first attempt at a Beginner Guide.

The next steps for the build will be:

So I mentioned the progression path I planned until the build keeps dying (not using Aether Clusters for stress-testing purposes). Apparently, I needed to do the list in reverse. I cleared SR 35-36 first to get all remaining skill points. 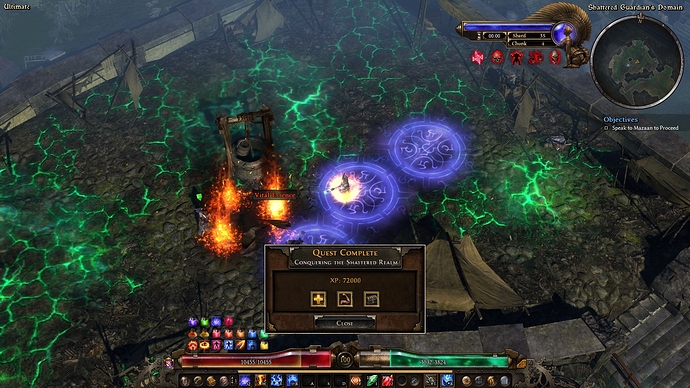 After getting all stat and skillpoints, I decided to spec into Quick Jacks and test it on the Skeleton Key dungeons.

I forgot to press record for the Overlord Van Aldritch fight, but here’s a Valdaran (Aetherial Nemesis) fight inside Port Valbury.

So far, the build looks pretty solid, until I went to Ancient Grove. The Manticore Deathstalker (a.k.a. Murder Kitty) killed me instantly, even when standing in Inquisitor’s Seal. This made me decide to do a bit of gear improvement. I got every component blueprint from farming Totems, and I used some of the items that I got. I also decided not to use other Legendary items to keep things realistic.

I also remapped some Devotions: Bat is now bound to Stun Jacks and Widow is bound to Storm Box. I found that Quick Jacks spam with 7 projectiles procs Bat more consistently than Storm box, hence the change.

Afterwards, I decided to finally try to fight Father Kymon and Korvaak in Ultimate.

Lastly, but certainly not the least, fighting Grand Magus Morgoneth in the Tomb of the Heretic. This is the most difficult fight for this build since Morgoneth has 92% Lightning Resistance and the dreaded Damage Reduction debuff (spoiler: I had to use Courageous Tincture near the end).

And that concludes my Main Campaign, Skeleton Key dungeons, and Shattered Realms 35-36 goals for this beginner build. The next progression will be using more Legendary items and a few skill respecs for higher SR and probably Crucible, but you can check out other endgame builds in the main post and here in the forums. If you’ve reached this point, thank you for going through this beginner journey with me. See you in the next one!

Looks nice. I theory crafted something similar for my poll a few months ago.
Did you mention that stormrend drops from Aetherwarped totems? I only read you wrote totems

But aether totems are the ones you wanna farm for that particular item. I have seen some people drop if from general heroes and bosses but the chances are very very small

Did you mention that stormrend drops from Aetherwarped totems? I only read you wrote totems

But aether totems are the ones you wanna farm for that particular item.

My understanding is that the Legendary items associated with Totems have no direct link to the Totem faction; looks like they have a connection after all. This is very good to know and it means you can just focus farming Aetherial Totems specifically for Stormrend.

Great work @teppieteptep ! Reminds me I wanted to make a proper stun jacks purifer, but you know me and purifiers…
Yes, stormrend drops technically anywhere, but primarily from aetherwarped totems.

but you know me and purifiers…

Time to avenge the Purifiers!

My understanding is that the Legendary items associated with Totems have no direct link to the Totem faction;

This page https://grimdawn.fandom.com/wiki/Monster_Totems contains all totem “specific” items and their preferred totem type. Looks like list there is incomplete, the nightshard shield drops from celestial totems

best skill of the game

Thank you for the kind words.

This page https://grimdawn.fandom.com/wiki/Monster_Totems contains all totem “specific” items and their preferred totem type. Looks like list there is incomplete, the nightshard shield drops from celestial totems

I never knew this existed until now. Thank you very much, I will add this to the guide.

On weak builds, I make sure not to fight manticore deathstalker on her own, because you can not steal life from her. So lure her so there are some trash mobs around usually work.