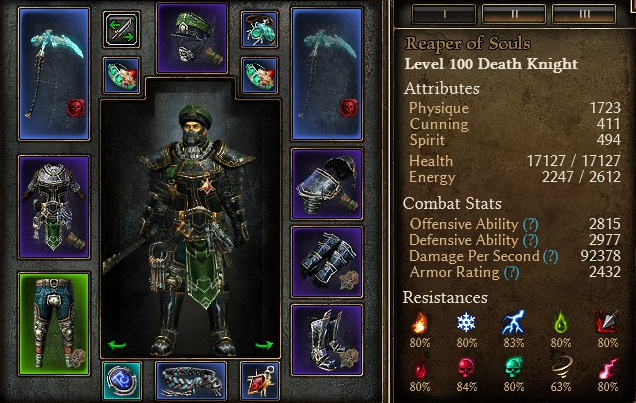 Picture with all permanent buffs except Deadly Momentum

My forte is making strong builds with easy to get gear for beginners. It’s a given that beginners ask a wide range of questions, but I have some limits on what I help with. The transition from my faction-gear setups into high-end builds is a thing I generally don’t care about – if one made it that far he should be able to figure things himself. But when it comes to Deathknight things are a bit different because some people manage to get Krieg set very fast, sometimes even before reaching level cap. Naturally sitting on the full legendary set until you get Mindwarp is not fun, so people kept asking me what should they do. I wanted to help them, so this build happened.

Just to make it clear – this build isn’t strong by end-game standarts, it wasn’t supposed to be. It’s better than my pre-Krieg DK, but it’s very far from optimized setups other people make to speedfarm Crucible and push SR further. Because such optimized high end setups isn’t my forte.

It’s a Krieg set build, so basically playstyle is similar to how you’d play a S&B version – spam Blitz on cooldown, spam Krieg’s Wrath on cooldown, use Warcry and Mark of Torment when necessary, the rest is you hitting enemies with Cadence.

Getting Master of Death is probably questionable, but I don’t care.

Energy sustain is more or less handled with Reaping Strike.

Devotion setup is pretty standard. Well, a bit greedy perhaps, since quite often Solemn Watcher is picked up instead of some other stuff I get.

Rings – Mythical Veilwarden Band. Probably the hardest thing to get for this build, since I was even surprised these exist (I GDstashed them). Could be replaced with The Magelord set rings.

Medal – Solael Mark of Blood. Cult of Solael faction gear. If you got Mythical Mark of the Dreadblade that would be best in slot.

Belt – Mythical Soulweave Girdle. Random drop, shouldn’t be very hard to get. High chances this belt is just best in slot for any Krieg build except Theodin Scepter based one.

Relic – I settled on Uroboruuk’s Reaping. Alternatively you could use a soldier relic like Doom.

A bit different from the stuff I usually post. Meant as a follow-up to my pre-KriegDK, but since it’s distinct enough I thought it’d be inappropriate to include in that thread, so I decided to make a separete one. Hope it’ll be useful at least to someone. Feedback is welcome.

reserved for high-end setup, if I ever make one

Congrats on the build,is always nice to see more builds with it this set!

The magelord ring set can be transmuted to each other, so it is enough that you find at least two of them in total and then you have the full set guaranteed (I know I had more than 5 of one of them and it thus took me a while to complete that ring set pre-FG).

A well rolled Fleshwarped core (can be powershoped at Hyram) could (?) be a decent replacement for the Soulsplitter (but a bit unlikely that one will not drop the blue weapon)

Have you tried playing with 3 WPS skills instead of one? (Zolhan, Reaping, Necrotic). Also, I would recommend trying it out with Harbinger of Souls and patching up DA somewhere else. It would be both more damaging and more resilient.

Another one gets stolen by pets! Evil Laugh

Congrats on the build,is always nice to see more builds with it this set!

Have you tried playing with 3 WPS skills instead of one? (Zolhan, Reaping, Necrotic). Also, I would recommend trying it out with Harbinger of Souls and patching up DA somewhere else. It would be both more damaging and more resilient.

No, honestly I only tested this one version, found the performance satisfactory and called it a day. I’ll test the multi-WPS version for sure, as for HoS instead of MoD idk - I’ll have to patch not only DA, but OA as well. Part of the reason I decided to ignore HoS is because it converts to vitality while Krieg does have some %physical on it, and this build already has pretty bullshit ADCtH anyway (weapon, revenant), so HoS is less juicy that way.

Very glad to see this build here. The more krieg the better.

Mmm i like this build , it’s great , i love DeathKnight, and this build is awesome

hey since grim tools is down can you plz post screen shots of the skills and devotions? 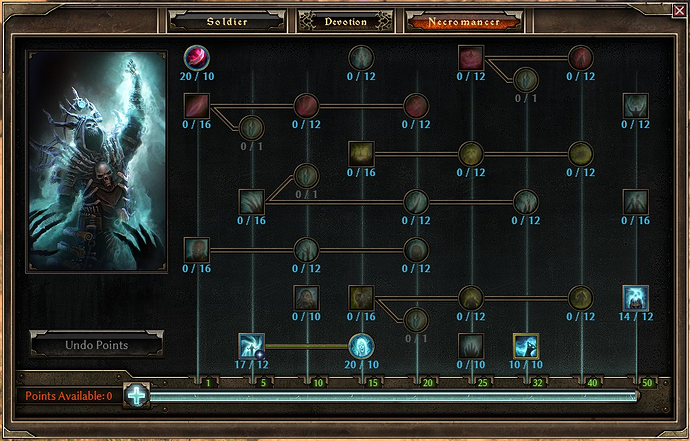 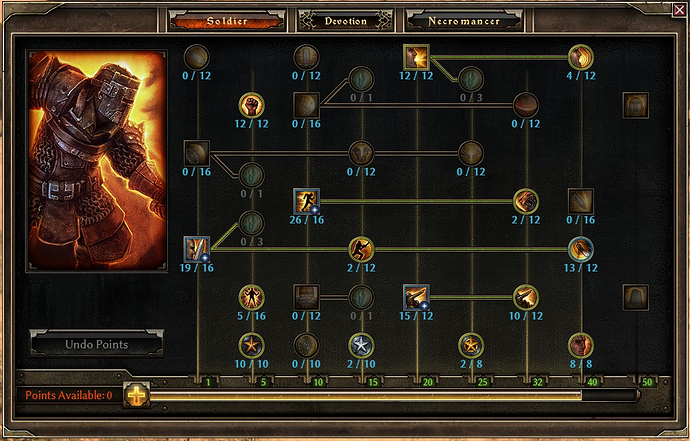 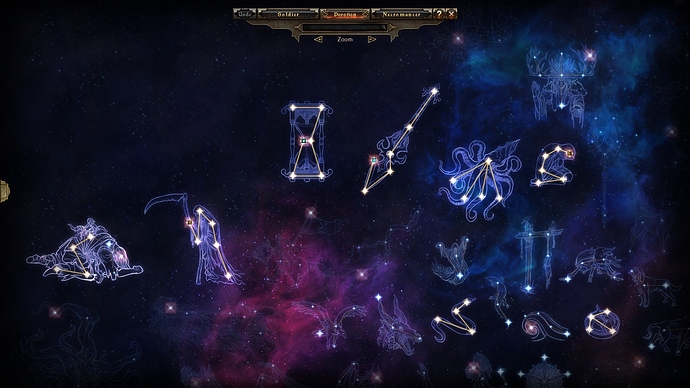 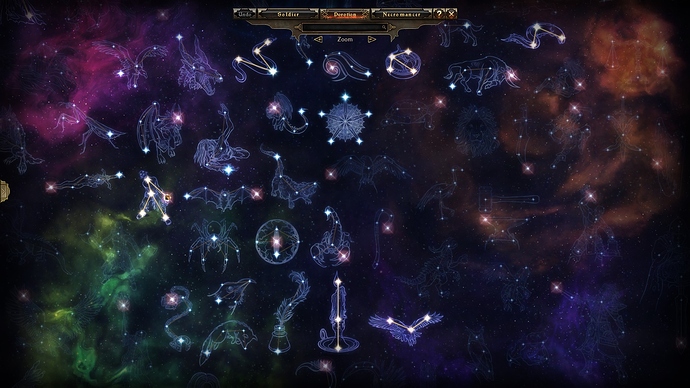 thank you again so much

what was the augments and components did you use at this build? things got hard with no grim tools available.

Can’t see the augments, but the components are seal of corruption in the weapon, 3x each of ugdenbog leather and living armor scattered around the armor with spellscorched plating on the belt (not 100% about this one), black tallow in the medal, 2x bloodied crystals in the rings, and an aether soul on the amulet.

I would assume the augment set up priority is to fill in resists, then the OA/DA/whatever you feel like you need.

A related question, I assume there’s no particular way to farm component recipes? My first character ended up more or less doing what you are in the guide here, but I don’t have bloodied crystals or living armor yet. Nemeses seem to give recipes fairly regularly, so farming those guys I suppose?

Thanks mate, for the augments i am just min/max the resist. But for the wep. I think it was bysmiels aether damage augment. And for the amulets and ring it was soliels augment for aether damage also. Still farming for living armor. And the other half of the magelord ring set. dunno where to find the relic tho.

And no bloodied crystal for me also, i used soul shard for now.

Can’t see the augments, but the components are seal of corruption in the weapon, 3x each of ugdenbog leather and living armor scattered around the armor with spellscorched plating on the belt (not 100% about this one), black tallow in the medal, 2x bloodied crystals in the rings, and an aether soul on the amulet.

A related question, I assume there’s no particular way to farm component recipes?

I experimented a lot on this, actually.

Normal quality (Bloodied Crystal, Ugdenbog Leather, etc) blueprints could be grinded from Treasure Troves on ultimate (or perhaps Elite, provided the location is lvl 86+). My favourite spot is Darkvale, since it has free dynamite just on the way. There are 4 spots where troves spawn, but since GT is down here’s a map. Orange is dynamite. 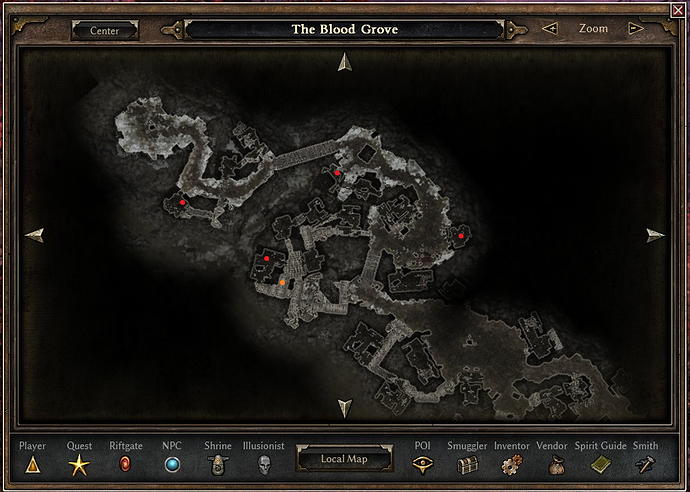 Rare quality (Living Armor e.g.) component blueprints are much harder to get from Treasure Troves and they require level 92+. What worked best for me is to farm SR on Normal at about 25-30 depth. Chests there got a decent chance at them. Your only other decent option is Roguelikes on Ultimate I’m afraid. Nemesis I don’t remember to be honest, I tried grinding Kuba on elite but it didn’t work out well for me.

dunno where to find the relic tho.

Use Haunt as a placeholder.
Relics can be a bitch to farm.

thanks @Stupid_Dragon your the best!