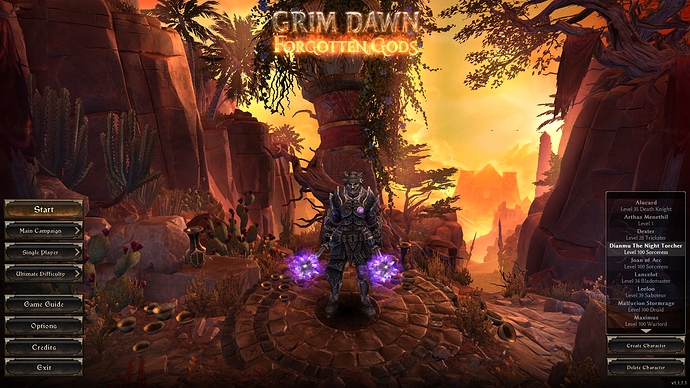 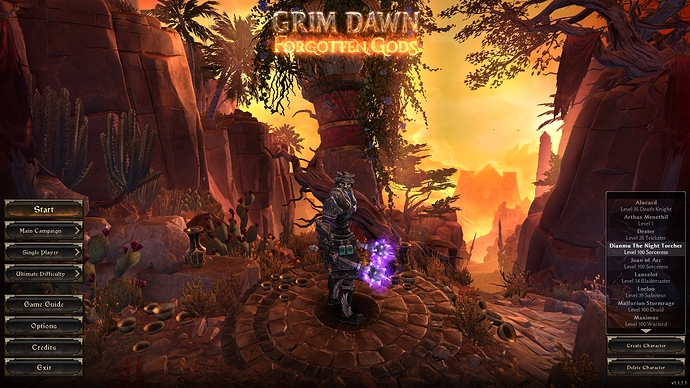 Hi everyone, I wanted to make a build around Sacred Harmony blades, I first started with a saboteur but couldn’t figured it’s endgame gear without SR set and I really don’t like SR set because it seems to me such attribute point and skill point waste, then it came to my mind that these blades can be better with arcanist+demolitionist, and here it is. This build is immortal in main campaign, I died once while leveling because of my careless act in temple of the tree. I killed mogdrogen on the first time without dying right after I restored the astekarn shrine while the build still incomplete; this might be the tankiest dw build, however, it has some vulnerabilities; acid and chaos and most important physical damage can hurt and fire/cold monster takes time. I guess Fight Fire with Fire is just a Metallica song… but the build is just like riding the lightning on the matter of speed.

If you do not use the same setup, then this build may not able to kill mogdrogen or do sr 75 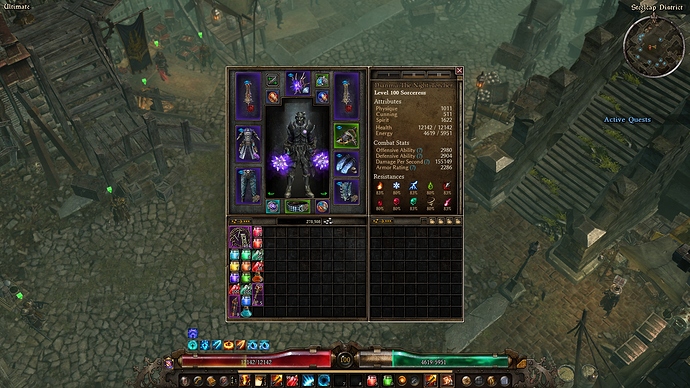 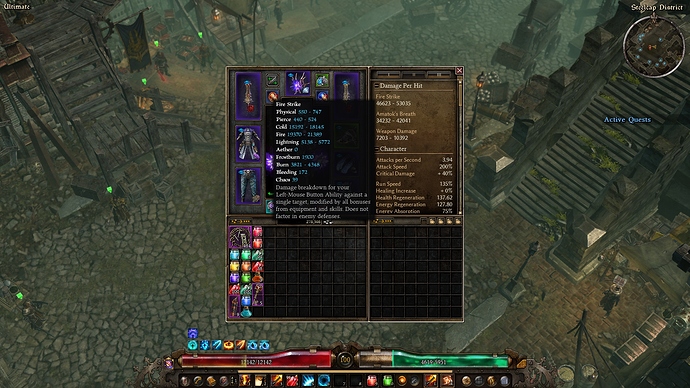 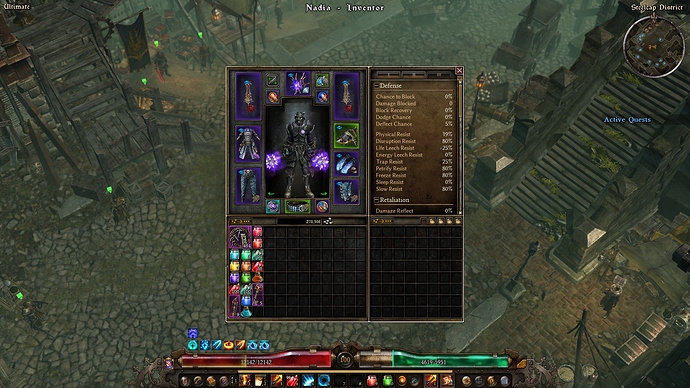 Note that I wrote 75 in the title however I did enough runs and it totally depends on the mutators and how skillful you are which obviously I’m not that skillful because my runs was inconsistent but till shard 70 everything was easy and build can farm 70-71 much more consistently. and build can farm 65-66 in light speed 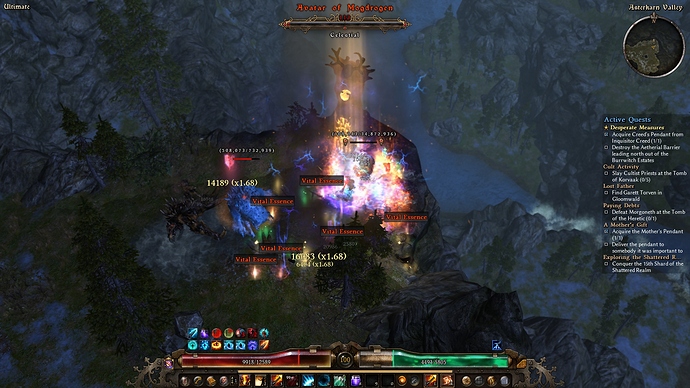 screenshot20.jpg1920×1080 1.32 MB
While killing mogdrogen you only need lightning resistance consumable. It takes a while so pay attention to your cooldowns.

Lokarr kill is easy, even the build has low overcapped fire resistances, you do not need any consumable,if you react fast his roam,you can kill him even before he spawns his gunman 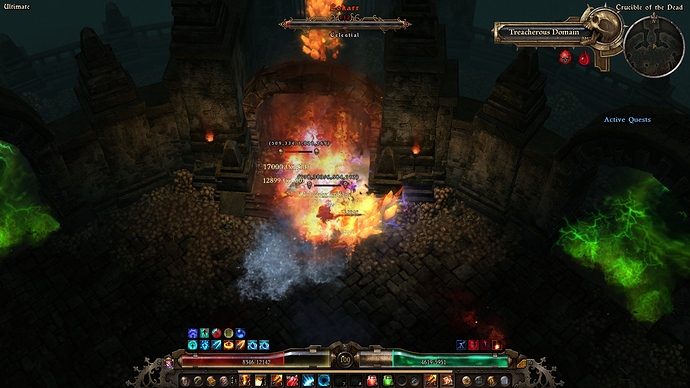 Items
I’m not going to explain each gear specifically because most of the parts are BiS for the build unless you use SR set; and if you’re going to use SR set then I suggest you use this setup however, you should get of destruction suffix for both Amulet and Shoulder to reach max overcap Fire Strike and Explosive Strike. Belt is mainly for +1 all demolitionists skills and aether>fire conversion to use last bit of aether damage, if you can live without capped slow resist you can use one with another suffix.

PS: I used Amatok’s Breath on the medal because it’s low CD and freeze proc, it’s compatible with Sacred Harmony proc and the iskandra’s balance proc so heroes/monsters with low CC resist are in constant freeze(especially arcane ones).

The build in original have very low life, low DA, low armor without devotion bonus so I had to go for blues in order to create a balanced build. Stun resist was capped with gear and passives but to cap Slow and Freeze you need Sailor’s Guide, Obelisk and Ishtak. Empyrion is mainly for +3 maximum aether and chaos resistances and damage reduction. Ishtak’s absorption proc makes you almost invincible for it’s duration, with blast shield, potion use and mirror nothing can kill you on 1v1. Except Callagadra, I tried; you die when you survival procs over and you can only reduce %15-20 of his health in the mean time If somehow you manage to improve damage without loosing survivability(let me know

) you can kill him with a very very very long kiting. I couldn’t try Ravager because I choose to be enemy of the Borrowholm but I doubt that this build has slightest chance againts him

.
If you are confident about surviving with low health/armor/phys resist/ I suggest you use this devotion setup which I never tested but looks great on paper https://www.grimtools.com/calc/wV1rJR7Z.

Focus on demo side first, max fire strike and explosive strike put some points in flame touched-temper and vindictive flame then go for iskandra’s elemental exchange line and max them. After that max maiven’s sphere of protection and put some points to blast shield. You don’t need brimstone until 94 so left that for the last points. You gonna need bladesworn Talisman until 58 then you can non-mythical Korvaak’s Brand to use dw weapons. You need to farm 2 early leveled Kilrian’s Skullbreaker from the Arkovian Undercity to more relaxed leveling. The rest is use what you find and keep your resistances high. Get Tsunami with your first devotion points then, viper>ghoul>spider>empty throne>rhowan’s crown>toad to make things easier. You can respec when you reached 94. 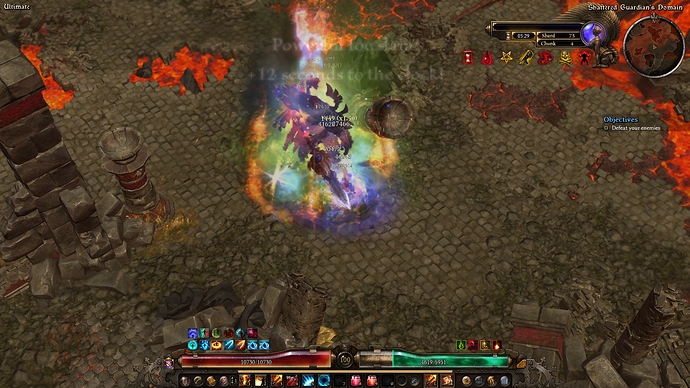 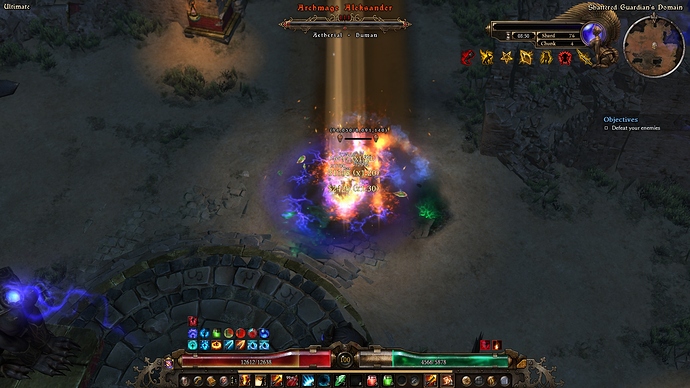 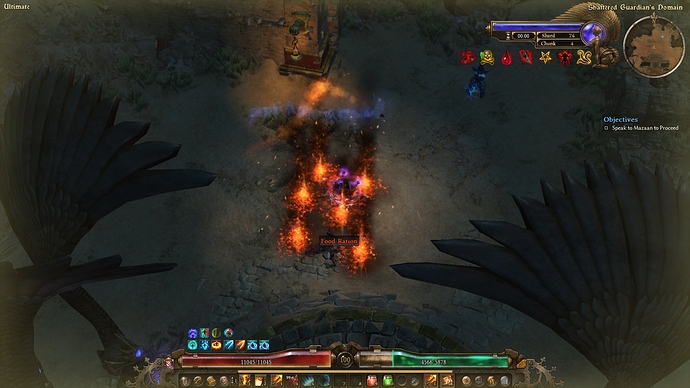 Build mostly depends on damage absorption to survive so should always keep an eye to your cooldowns. Don’t waste mirror while other absorb procs or ghoul active. I was actually using this set-up with higher damage but I changed just for a try and settled for it. There is no big difference between them, one(the thread version) has higher speed and stats/resists etc so it can endure better, the other has better weapon damage and extra 12-13k sheet dps so kills faster. I have runs 75-76 with both versions but I liked the highest speed version.

I couldn’t really figured out why or how but Zantarin sometimes one-hits you(even after increased resistances) so beware. Worst enemies are Gargabol, Father Kymon because they hit hard and they’re hard to kill. But also chaos damagers are dangerous, be careful with uncle benn combinations. If you encounter with Gargabol + Benn’jar after SR 65; and can’t seperate them, just quit you can’t survive fissure+trap combo twice and you can’t kill them in the meantime. On the other hand this build can tank Mad Queen and Reaper of the Lost(68 boss room if I remember correctly), or Iron Maiden and Fabius at the same time so it’s kinda confusing.

The build can go higher with careful(than me) and better piloting players that don’t jump right into death like me. And I’m sure the build can be improved with another devotion/mastery setup and better lifesteal while keeping the attack speed but I choose to stick with Isthak and Light of Empyrion and star pact, and also I have some version with much higher damage but with very low physical resist/armor/health(link is above) so I never tried. I have no ambition to push further shards. I am not capable of doing camera abuse so in all my runs I fought againts 1v2+ in small boss rooms so as I said if you’re more skillful pilot you can do more.

I am not able to proceed in Crucible due to my computer however if I try, I’ll update the build. I may add a Shattered Guardian Set version too.

Hey! I have been playing this build on a new character (I am a beginner) and it’s going pretty well in Elite! Do you have any recommendations on gear I should be on the lookout for as I start farming the gear in your grimtools (besides the Skullbreaker)?

Pyran’s Visage, Arcane Harmony Leggings, Elemental Harmony Rings and Icekorn Talons has blueprints, so you can farm elite mid-level SR/Crucible and totems for blueprints. Farm Port Valbury for the Shoulder, you can get one of these also in Fort Ikon, Plain of Strife and Gate of Necropolis. You also need to go Port Valbury for the belt. You can use this or this till you get the fateweaver raiment. This and This till you get the gloves. These are also the leg options Tranquil Mind , Fateweaver Legs. But you need to balance your stats in order to use different gears till you reach the goal build. Check also faction gears, you might find something useful to take you ultimate.

That’s super helpful! Thanks a lot.

I am not capable of doing camera abuse so in all my runs I fought againts 1v2+ in small boss rooms so as I said if you’re more skillful pilot you can do more.

I’ve just started playing the SR to test some build and camera abuse seems really easy. Just turn the camera so that North and South are reversed before entering last chunk. At then move step by step near the edges while not changing the camera rotation until you pull some boss closest to you. Then go back to the entrance while pulling a boss with you. Rinse and repeat. You don’t even have to zoom the camera which helps even more from what I read. Thanks for the general SR tips. They are useful to me.

I’ve just started playing the SR to test some build and camera abuse seems really easy. Just turn the camera so that North and South are reversed before entering last chunk. At then move step by step near the edges while not changing the camera rotation until you pull some boss closest to you. Then go back to the entrance while pulling a boss with you. Rinse and repeat. You don’t even have to zoom the camera which helps even more from what I read. Thanks for the general SR tips. They are useful to me.

Good info but I have high myopia and astigmatism. I also have some focus problems due to diabetes and hypotension so rotating camera kinda breaks my vision and gives me dizziness for a few minutes. So I fixed the camera and removed the key binded to that command so I only zoom out when I started the game with that char and change nothing till the session ends.

Ok. If you’d like to rotate camera by 180 degrees just before the boss junk, you can always use my program because it rotates by a set angle with one press of a button so you could:

I’ve developed a weird habit to always write super long instructions ‘for dummies’ to avoid back to back questions and doubts answering which is more time consuming than writing everything in advance and in details. I hope people are not offended by that