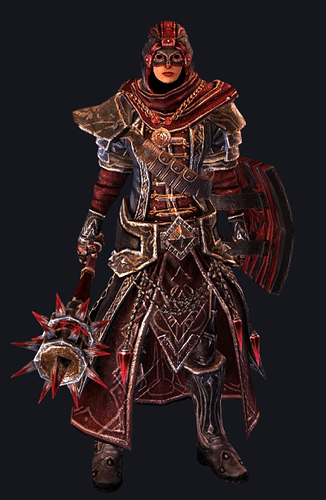 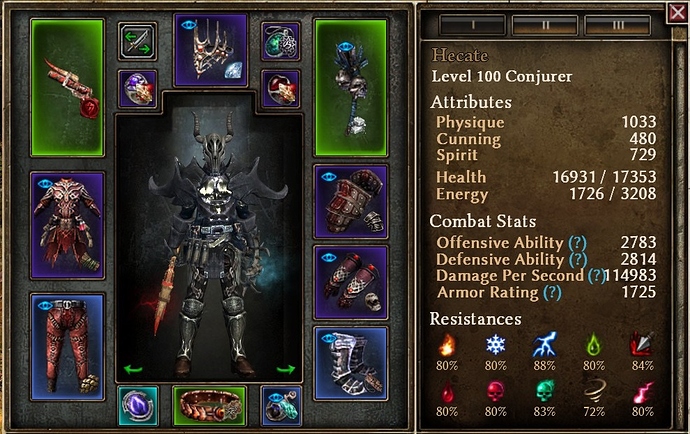 Crucible of the Stars

The most similar build I’ve found on the forum is this no-green full Valguur Conjurer focused more on the Sigil.

Hello. Sadly Valguur set is hardly outclassed by just target-farmable Dark One in terms of survivality (speed too probably) but I made attempt to make it something more-viable for shattered realm and I found a way - Oblivion relic. I’ve started to learning Crucible either so I made separete setup for it with decent score (I think) as kinda new player in this mode. Build is not HC viable until you stick to 50-65 shards. For legit players who want some vitality caster I still recommend to stick t…

Good build, thanks for mentioning my setup.

Vitality totems are nice fit to a vitality caster’s arsenal. Even on builds without any mods are worth it.

Crucible of the dead is dead.
Nice build.
#deadmap

It seems to me it was made to compete with Crucible of the Dead.
I like the layout

is better but it’s definitely close and a nice escape from the dreary CotD. Also CotS gives me Titan Quest vibes.

Apparently Valguur is not as bad as ppl claim it is =) Gratz for totem builds.
Do you think its worth going for DG after all nerfs? Abomination seems better on paper.

It doesn’t look like that to me but let’s suppose you’re right. The best possible setup with Abomination still seems worse to me than the best possible setup with Hungering Void, partially because the steep 18 Green req. Try to transform the map and you’ll see what I mean. You won’t be able to afford Wendigo + Sailor for example. But if you find a better setup, I’ll look at it for sure.

https://www.grimtools.com/calc/D2pwwPLN that devotion setup 100 less OA and DA, but fiend+scales+shitton of flat to fuel bat, fiend and scales.

That’s an insane setup, I’ve never seen it. I forgot about RR from Scales. Even if it was weaker offensively, it has Scales dammit, so seems better in general, in regards to offense + defense.

Maybe I’ll use your setup in the update because I need to change the weapon anyway. The 6th Storm Totem is an overkill, not constant, and I don’t see players being able to maintain this number to due to various reasons (not pressing buttons in time, skills queuing, bad CDR rolls etc).

I’ll probably try Ugdenbog Howler + your devotion.
(I wouldn’t take Green weapon if I knew in advance I don’t want 6 Storm Totems but now it would probably be a downgrade without a weapon without crazy affixes)

Good luck. Personaly, i think that +totem amy suck and Pestilence with plague of consumption is strain out better. Trough 1 extra button to press is kind of a pain on such setups.

I don’t think so (Storm Totem is the main source of damage here + we’ve got tons and tons of RR + we don’t need +1 Occ) but it doesn’t matter since this is a Corrupted Storm Totems test.

Trough 1 extra button to press is kind of a pain on such setups.

Yes, no more buttons. I could even use Bloody Pox if I wanted (got a lot of free skill points, could pull from Curse of Frailty for example). I didn’t even use Wendigo Totem in the video.

[edit] You know what, I’ve prepared a legit farmable version for testing with your Devotion setup
and I’ve noticed there’s not really a good way to proc Flame Torrent but actually Rat has good nice Cunning and Spirit I need and 1 leftover point can be use for this good Abomination node with 80% Vit, 30 OA and 250 Health.

I just tested your build w/o Oblivion. I`d say 2/3 of dmg come from Oblivion skill

I wonder if Cabalist will perform better. At least, you won’t care about totems =)

Did you run it with Oblivion as well or you just ran without Oblivion, performance was poor and from that you concluded Oblivion is 2/3 the damage?

I run it with oblivion and then tried to switch it for Eldrich pact. Results reminded me of my old black flame Warlock from 1.0.2.1

I assume 26/26 Storm Totems and permanently 5.5 Totems like I do.
Because you know, I don’t stand in Crucible of the Stars in one damn corner without a reason

Storm Totems deal more damage than Oblivion.
This agrees with the common sense although I admit Oblivion is pretty good.
(I was not biased when making this calculation or attempting to prove you wrong)

Btw I’ve already moved to another build (also using Oblivion) so I may refrain from discussing / optimizing this one further
but I’ll read and consider all your suggestions.

[edit] The build has been updated and now there are 5 Totems instead of 5.5.

Great build, no idea how it went under the radar.

How difficult get off-hand now with “smart” affixes? I guess off-hand prefer to drop with lightning damage mods?

I have a similar full Valguur Ritualist build that doesn’t need “contradicting” greens that much and should be more achievable legally. Might as well be even stronger (due to powerful RE and -20% Vit Res on Siphon Souls) but I haven’t been eager to test it as I’m a bit bored with Oblivion builds. It feels like a combination of this build and my recent Chaos RE one. I’d like to make a thread about it at some point just to do Valguur’s Hunger justice not because it’s particularly creative or normal player friendly but because I have only seen over 6 minutes full Valguur runs whereas this one might even go under 5, especially with the cooldown mutator. Longer runs might also have been not because of different builds but due to players not staying in once place with their Totems or just different times, different patches. In any case Valguur’s needs redemption.

Valguur Ritualist with 20k life (the weapon doesn’t feel like set in stone, some Unique one with -Vit Res may do the trick too)

How difficult get off-hand now with “smart” affixes? I guess off-hand prefer to drop with lightning damage mods?

If you consider I got all sort of damages except Aether on the Marcell scepter I’m trying to farm; they don’t prefer own damage that much!