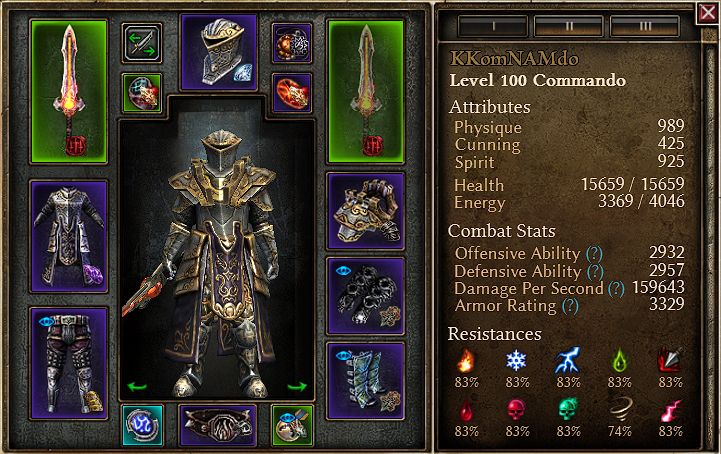 forumstats.jpg721×454 100 KB
^ingame stats with all permant and without any temporary buffs. DPS shown is Blade Arc, which increases up to 200k with temp buffs, highest crit 543k.

Which affixes to look for on the greens?
On the claymore look for attack speed, flat fire damage, %fire damage or OA should be good. GG affixes are probably “Hellfire” / “Officer’s” & “of Wildfire”.
On the medal look for aether res, OA and DA.

Feedback & Final Words
It’s pretty safe to say that while this build can do most content (no ravager, callagadra nor crate though), it does underperform when it comes to killing speed. Partly because of its low RR (86% without taking Viper into account), which is an absolutely abysmal value for an elemental build, and partly due to it using a green weapon which is basically poor man’s Worldeater. Compared to Worldeater a weaker performance is expected.
Obviously RR would be a little better, if you max out thermite mine to 21/16 (+8%RR) at the cost of losing other stats.

Suggestions for buffs: Buff the Weapon (maybe bonus RR to thermite mines or higher %damage to Menhir’s Bulwark) or buff thermite mine as suggested in my other thread.

If you guys have any suggestions on how to improve this build, please feel free to give any kind of feedback.

Anyway, have fun purging the foes of cairn with holy fire. Praise the Sun(herald)!

Great build and nice to see new items being used.

I made myself version for Crucible here’s the GT, couldn’t resist GD stashing fantasy affixes on the weapon

I’ve done only one run, But it should be around 6 , maybe slightly better.

Problem is Maiden, also Grava. Other than them everything melts in a flash.

Yep those two were by far my biggest problem aswell. The lack of RR is really visible vs those two. Grava fumble pools on top make things even worse for a 2hander.

Hey Rekt, looks like a fun and interesting build to play!

Do you think you can add an imaginative BiS affix greens Grim Tools link? I really appreciate the realistic green build setup but I always like to imagine what boundaries I can push to improve upon existing builds.
Do you think Worldeater can fit well here (still on the hunt for one

)? I’m not theory crafting savvy enough (still rather new, currently going through my 3rd build), so this is really just a genuine question.
At any rate, thank you for all the content you make and share with the community, it’s all been super helpful

BiS for this sword is a double rare Infernal (prefix) Sunherald of Wildfire (suffix), but a Searing of Wildfire will do just fine.

Thanks for the input, what would you say about the ring and medal?

Tempest of alacrity would be pretty good for the ring, if you already have the resistances covered of course. You’re gonna need to focus on affixes that fix your resistances first, though.

Have you considered Golemborn Greaves? As they have decent skill bonuses and this is a high armor build.

Have you considered Golemborn Greaves? As they have decent skill bonuses and this is a high armor build.

Golemborn Greaves are actually insanely good for this build aswell, you are right! Just need to get better stun res on affixes/devotions to compensate.