Efreet Warrior Collage A1.jpg1737×534 495 KB
Hello! This is a 2-handed melee Commando that uses the Conduit to convert Blade Arc to fire and employs that as his main skill. He also casts Blackwater Cocktail for a large amount of support. A lot of the build’s power comes from Shar’Zul’s Worldeater, and it doesn’t rely on item sets, but it does use a few MIs. It has a fairly standard devotion setup for fire damage.

Since I posted this in 1.1.5.2, a string of changes have buffed this build, while only a couple have weakened it. Most importantly, there’s now a 2H fire sword illusion to use with Blade Arc!

Here’s the screenshot of the character sheet with just permanent buffs on: 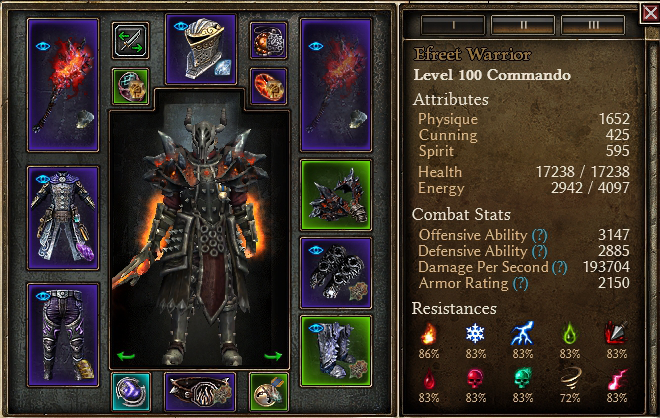 Grimtools
Updated 1.1.8.1 build (boots have “of the Wolverine” but it doesn’t show on GT)

1.1.8.1 build with the minimum affixes and no armor augments (generic setup)

For leveling a character like this, I would recommend using a combination of Demolitionist bombs (Blackwater, Grenado, Canister).

Items
I’ve opted for only the head piece of Justicar set. Why not more? Well, trying it greatly reduces phys res in favor of armor (which the build isn’t stacking anyway) and/or decreases DPS. Even the flat damage on the 3 piece bonus isn’t as valuable as the bonus skill points to BA that the MI shoulders provide.

Main hand: Shar’Zul’s Worldeater – extremely powerful for a fire Commando and greatly helps with needed skill points, but Sunherald’s Claymore is a viable alternative
Helm: Mythical Faceguard of Justice – a fantastic universal helm for Commandos
Chest Armor: Fateweaver’s Raiment – very, very good for builds that don’t have an essential chest piece, plus the % elemental damage and Flahsbang points are used
Shoulders: Benn’Jahr’s Pauldrons – good piece that not only gives points for the main skill, but has crucial stats: physical resistance and attack speed
Pants: Mythical Legwraps of the Tranquil Mind – the resistances are relevant and slow res is even needed; spirit enables equipping the chest piece; bonus to Flashbang and proc aren’t bad; not a mandatory item, a number of other choices could be a good replacement
Gloves: Mythical Grasp of Unchained Might – good stats on top of modifiers to Blade Arc
Boots: Stoneplate Greaves – a good flexible option; Mythical Wyrmscale Footguards, Mythical Golemborn Greaves and Mythical Magelord’s Greaves work as well
Belt: Mythical Ulzuin’s Torment – strong fire belt with bonuses to Demolitionist, couldn’t want much else
Amulet: Conduit of Warring Whispers – the build-enabling item
Ring 1: Cronley’s Signet – The best way to max Laceration, which is important for fire Blade Arc and scales extremely well by the ultimate rank; flexible on top of good stats
Ring 2: Mythical Combustion Band – a lot of favorable stats along with bonus RR make this excellent
Medal: Balthazar’s Crest – seems tailor-made for the build
Relic: Annihilation – perfect as all stats are desired, and the proc is augmented by the conversion the weapon has; the best completion bonus is Temper + Agonizing Flames

Crafting for stun or freeze resistance is preferred.

Skills
Not much to say here, it’s mostly straight-forward. Investing into Blackwater Cocktail is easy with the bonus skills. It gives more freedom with Devotion choice and the damage reduction has better uptime than War Cry. There aren’t too many buttons to click and it doesn’t feel clunky.

Devotions
Ulzuin’s torch – obvious choice, but worth noting that the proc works nicely with the phys to fire conversion
Alladrah’s Phoenix – really good as it gives a lot of global crit damage which the masteries don’t provide, extra fire damage and some damage mitigation
Chariot of the Dead – solid Devotion that fits the affinities, and the CC res isn’t wasted
Viper – the elemental RR is actually significant against monsters with high fire resistance

Feedback
Shar’Zul’s Worldeater seems too stacked, but because it supports a class that is generally regarded as weaker, I suppose it’s fine
The proc on Killrian’s Shattered Soul could stand to have burn damage.
The toggle on Horns of Ekket’Zul looks like it should have chaos damage. Thanks to the Justicar helm change, the item feels obsolete for fire Commando now.

Special thanks to @RektbyProtoss for some feedback on the build before I posted it!
Thanks to @banana_peel and @Nery for advice.

Another fire BA Commando that uses Sunherald’s Claymore and more Justicar set pieces by @RektbyProtoss
A more conventional way to use Blade Arc, a beginner’s build with a guide included by @Stupid_Dragon
A classic fire Commando that uses Forcewave instead by @afanasenkov26

Cool build and nice results! Eager to see it in action though.

I like this build a lot, thanks for posting it!

I have ideas how to improve it further:

I like that you don’t use Justicar set and Consumptive medal isn’t very good too.

Yeah bringing down probably BWC to 5/12 for this should be better (weapon already has OA shred).

Is it really effective to do this with Military Conditioning? The DA and Health aren’t wasted, especially when getting bursted can be problem.

Good option if you don’t have a great Rylok Crest and don’t need life steal. But no chaos conversion+wrong resists+no skill bonus makes me not like it enough here.

Is this to say that you think it should be nerfed? Items that support weird builds tend to be pretty stacked, understandably (see some of the new items from the dev stream, very cool!

I think it’s just slightly over the top. It works for full sets as well. I would buff those new 2handers when I look at Shar’zul haha

Thanks a lot for the kind words and feedback guys!

Updated the build to 1.1.8.1, added a video and revamped the thread!

Can I add it to compendium? Paperwork is on me.

Of course, kind of you to offer

All the rares are scaring me, can you share some insights on the minimum affixes I need on those rares?

Ulvar’s right, you mostly want to cover your resistances. Use the best affixes or whatever fits. Other useful stats are OA, DA, fire/elemental damage and on the ring/medal also lifesteal and attack speed.
I’m using 3 DA armor augments so feel free to switch those out and use a different Conduit resistance suffix.

Edit: I’ve added a version of the build that has just one magic prefix and one magic suffix, it’s enough to just fix resistances with armor augments from there.