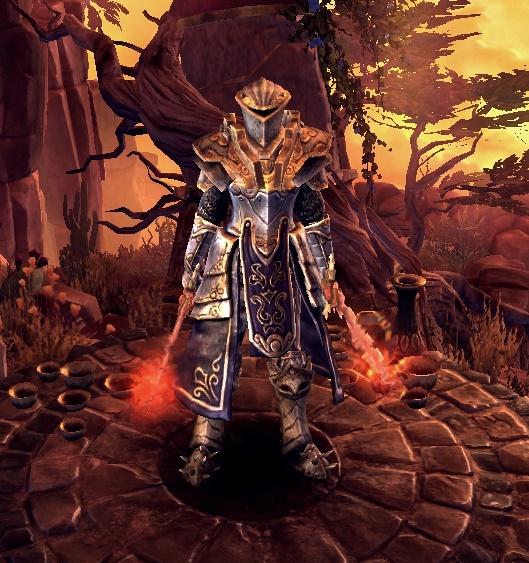 Hi everyone. After the new update with -%15 Fire RR Night Whispers variant I wanted to try a fire nightblade. First I tried with Dervish. Used Soulblades, but man… The burn damage was %35 of the total output, flat fire damage was low, even %25 Adcth wasn’t enough; with all the procs like fissure and torch etc the damage was good but couldn’t stand anything hits hard. Also tried a defensive route on devotions but then there was no damage at all. It was a failure so I broke my glasscannon deathmark sabo and made this fire Saboteur. It’s a balanced build, tanky enough, easy to play.

Images from the game with perma buffs + PB and LA buff

I used Ember’s Calling set instead Justicar and used Vigazor Heart to get full conversion of everything.
Build has now more damage definitely, %100 conversion of Acid/Pierce/Cold into Fire but lost a bit tankiness provided by Justicar set. Also SR chunks are harder now so it’s hard to complete 75-76 without dying but damage is good enough. Maybe Nex&Ortus version might perform better.

Images with perma buffs and PB 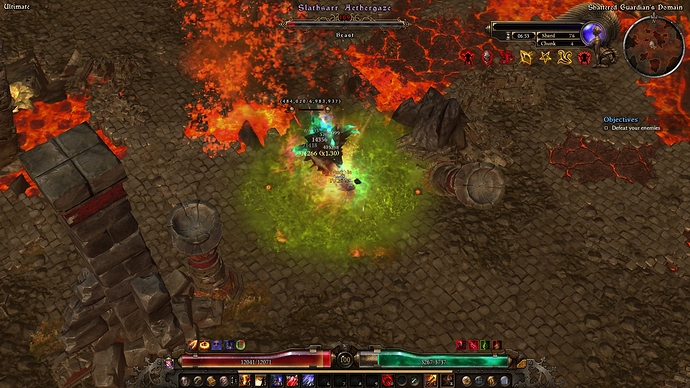 The most challenging boss was the Mad Queen in all runs so with bad mutators it can be a problem also Grava takes a bit longer than the others.

Build doesn’t provide much fun, atleast nothing more than a Cold Sabo nor require piloting skills so it’s kinda a lazy build. But apparently fire nightblade won’t be a meta. It needs some gears that converts the WPS to fire, even Fire Shadow Strike and now this version of the conduit fills the amulet slot, using Fire Blade Spirits isn’t an option either. There is a lack of cold>fire conversion among the gears that suits the build except pyre rings but Combustion rings is a must use so can’t wear dual pyre rings either.
Since the Justicar set provides no skill points on Nightblade side, we can’t spend our points freely, that’s why I decided not to use BWC for RR. If you use another MI(perhaps a solael-sect legs with slow resist affix) with good resistances, you may use Annihilation relic to boost the damage but without too perfect MI’s it will be hard to balance the core resistances like aether, chaos, acid and bleeding.

PS: This Saboteur was a prexisting build of mine with Deathmarked set; I wasn’t expecting to kill ravager with it so didn’t became friends with Borrowholm while leveling it. After respec it to a Fire Sabo, the previous decision forced me to use different weapon augments than the ideal but you can choose to be friends with Borrowholm and use the 12 flat Fire damage augment. Though won’t create a big difference and lowers your OA.

Actually despite some synergy between RF and Nightblade WPS skills fire Dervish or Saboteur in that regard are way exotic, even with Nightblade conduit. So it’s hard to reach decent damage. And you’re right that Dervish is so point hungry mastery. Btw I like Iskandra relic for builds with big %WD skills. Also interesting use of Vampiric shadows rune with the weapons conversion.

It’s Sabo actually; my first aim was to make dervish with Soulbladea but failed. Too many burn damage for an AA build and not enough flat fire damage. I didn’t try 1 soulblade 1 blazeheart though but doubt they would make a difference. I wasted too many hours and mats to make it work then gaved up. But atleast with Saboteur I created some consistancy but again it’s kinda mediocre. Shieldbreaker easly outperform this.

To achieve it with Dervish build needs more skill points definitely and justicar set support for Oathkeeper isn’t good for any AA build. Maybe if devs add some nightblade fire wps modifiers it might work.

Btw this was the failed Fire Dervish build if you wanna check; https://www.grimtools.com/calc/0V0eKxRZ

Dark Desires kinda useless since build has enough DA and other OA shred sources so Vampiric Shadows provides extra heal. Depending of the enemy’s life leech resist it can fully recover the health while less than half.

Great execution - you really thought items / devotions / skills through and optimized them.

@fordprefect
I have done a similar Saboteur build and I can tell you a few upgrades and give you alternative choices for the build.
First of all you could deal ~50% more damage with weapon attacks and have around 5k more sheet dps on top of that if you use a good Kilrian’s Skullbreaker and Execution as your main WPS (I have done the maths).
Next would be to replace your Light’s Oath for Band of the eternal Pyre for more damage with 1 point in static strike (as you may need to refund points from Dual Blades).
As for Augments for rings and amulet, I would recommend Osyr’s Temper, as it gives way more OA,DA and has the same amount of flat fire as your current augment (100% chaos to fire conversion).

Lastly some personal preferences of mine which at the end won’t matter as much:
-For Medals I prefer Mark of Divinity for the 1k hp and 3% max elemental resistance.
-Golemborn Greaves for the + skills, phys resist, armor and 500 hp
-Any Girdle with + to Demo or Nightblade Skills would be more benefitial with less points in Dual Blades (as with less flat pierce your conversion is useless)

Your build resulted in a few upgrades I could do myself. The amulet seems to be better than what I have currently equipped and your armguards and relic are also good alternatives to what I have chosen to use, so thank you for sharing your build !

First of all you could have ~50% more damage from weapon attacks and around 5k more sheet dps if you use a good Kilrian’s Skullbreaker and Execution as your main WPS (I have done the maths).

First, you need more skill points to get Execution and invest it so some of the skills will have to be one pointers, that means less damage/DA other stats etc.
Skullbreaker has low AS at the beginning, I have a few good rolled ones and I have tried it with Shieldbreaker, Almost fully converted 2x Burning Void with Dual Blazehearts beats Dual Skullbreakers’ %50 more weapon damage to FS. I tested it with both build have %200 AS. So I eliminated the disadvantage of Skullbreakers and Blazehearts won even though that setup had much lower dps on tooltip.

As for Augments for rings and amulet, I would recommend Osyr’s Temper, as it gives way more OA,DA and has the same amount of flat fire as your current augment (100% chaos to fire conversion).

Lastly some personal preferences of mine which at the end won’t matter as much:
-For Medals I prefer Mark of Divinity for the 1k hp and 3% max elemental resistance.
-Golemborn Greaves for the + skills, phys resist, armor and 500 hp
-Any Girdle with + to Demo or Nightblade Skills would be more benefitial with less points in Dual Blades (as with less flat pierce your conversion is useless)

And all those changes requires a new kind of balance of the resistances, which also might force me to a different devotion route which breaks the build all over. This build doesn’t need HP or any other defensive mechanism, it’s tanky enough. Damage is not bad and feels much better than the tooltip shows(which you shouldn’t take the base of your build at the beginning because dps is not everything). I utilized all the WPS as much as I can and converted the flat damages on them to fire so with %99 WPS, build deals enough damage. It’s not the fastest fire build, and certainly doesn’t have enough dps to match cold sabo with N&O but it’s enough in it’s reality. Which is Fire Nightblade so most people see it a meme.

And I can only think that one choose to play fire nightblade only because he/she wants class’s WPS. Execution is best single target WPS which I’m aware but utilizing it requires a much different gear and devotion setup and I tried them. Damage difference isn’t that big and can’t stand againts anything because of bad stats. And there is no way to get serious cold>fire conversion without sacrificing some good fire gears so focusing on pierce>fire is better. The only thing I haven’t tried about fire NB is this weapon; https://www.grimtools.com/db/items/12465 which I believe it will work better with one Blazeheart in Sabo to convert all physical to fire or one Soulblade to convert all physical to fire in Dervish rather than wielding two of them.

And I appreciate if you can share your build and results so I can see it better if I have done something worse or forgot to use some other thing.

And… Welcome to the forum!

While I was exchanging amulets for the Fire Reaper I’m working on, I wanted to test something I considered earlier and results seems good. Here are the changes;

I increased the damage, along with extra %15 RR. Changed the devotion setup aswell. But it now become squishier probably. It costed %3 phys resist, 100 DA, 500 health, 200 Armor. Some stats are better like OA, trap resist, slow resist, crit damage and AS. Lost LoE proc, build now only have %10 Damage Reduction from BWC line; Lost Scales and gained only %1 extra life leech. I might have to change gloves component into Restless Remains.

So untill further testing, I won’t update the build. And that testing will be done after Fire Reaper so it will take a while. I might try this one in CR 170 aswell if I got time to do all aspirant, challenger levels from the beginning.

if I got time to do all aspirant, challenger levels from the beginning

You can use tokens to unlock higher difficulties in crucible, or have you never came to gladiator before?

You can use tokens to unlock higher difficulties in crucible, or have you never came to gladiator before?

Ofc I did gladiator CR. lol

My Crucible noobness revealed itself. I didn’t know that. What tokens are you talking about?

you buy them from the vendor in crucible

you buy them from the vendor in crucible

Anyway I can find it myself I guess

That was the main reason behind I don’t do CR with all my characters. I was being lazy to do all right from the beginning. Now I can I suppose.

yes you are not noob, just enter gladiator crucible with a char that has acces and buy the token from the vendor, place in shared stash, open another character and right click on token

Well I guess I can be an ‘‘Elite Builder’’ too!

All I need to record things if my computer work well while it’s running behind.

Updated with Ember’s Calling set. Smells like a meme spirit

, i thought the flat Fire and % Fire looked a little low with full Cold/Acid/Pierce->Fire conversion.

i thought the flat Fire and % Fire looked a little low with full Cold/Acid/Pierce->Fire conversion.

LoL that explains why I have had difficulties in killing aswell

This is second time, I also had a lot of runs with Cold Dervish without coldstones… I’m not on drugs don’t worry

Thanks, I’m gonna change the link and the image but won’t make it much difference since it gets one-shotted by Iron Maiden once in a while nevertheless it should be smoother

Well those augments actually affected much better than I thought, %15 dps gain, more OA and I fixed the resists and health a bit better. Thanks for noticing