The reason behind this build is to create a skating and throwing build with a bit of aura damage. I use Celestial Presence from scepter and Aura of Censure with bonuses from shield, helm and medal. I convert Aegis of Menhir to elemental damage using conduit amulet and I use two movement skills - Vire’s Might and Amatok’s Breath. This build is hard to kill. I think it is hardcore viable. It kills groups of enemies quite fast and single boss enemies are slower but still OK. Gameplay is simple. Put Inquisitor Seal under a boss and skate from one edge of seal to the other and throw a shield. I am actually quite puzzled from where the tankiness of this build comes from. It does SR 65-66 really easily. In SR 65-66 there are not many situations when life approaches 50 %. Most of the time it barely moves. It can even do SR 80. Build is fun to play. Skating and throwing always is.

Build uses two green monster infrequent items. Affixes are chosen to not be double rare. You want bonuses to physical resistance, elemental damage, OA and DA. Augments are not used for resistances mostly so you can fit in practically any affixes. All crafting bonuses are to slow resistance.

image from the game with passive buffs + Word of Renewal 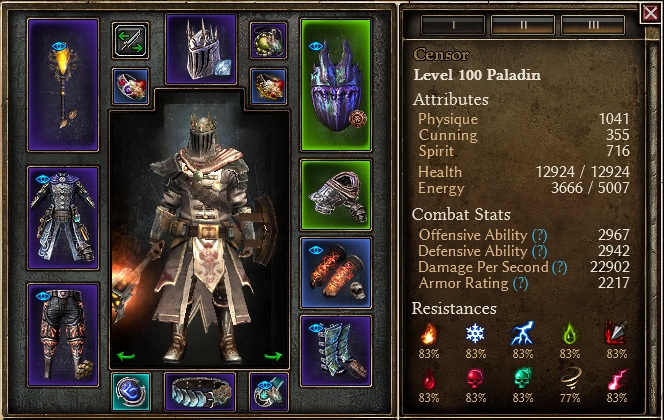 image from the game with passive buffs + Word of Renewal, Deadly Aim and Ascension 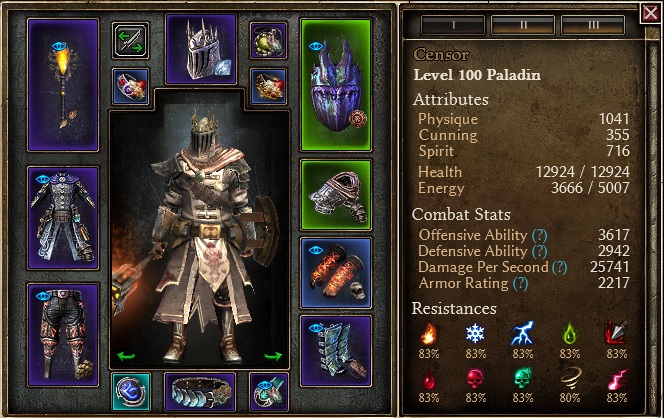 This build does SR 65-66 really easily. Only killing Mad Queen takes longer time. It can even do SR 80. Be careful to always be in motion against tough bosses like Grava or Reaper in boss room. I did not run into Mad Queen in SR 80 but I gues it would take a lot of time and patience to take her down. Boss rooms are slower in SR 80.

How do you not take Oathkeeper’s Celestial Presence for more RR and more aura damage? Or rings with procs if you are building an auramancer? I am sorry, but this one could’ve been done so much better.

It is only fire RR so I decided to not use it. I find disrupt resist better than some procs. There is also RR on the ring for more consitency. Rings are also for resists. Then show your version. I am satisfied with it. Very hard to kill and kills stuff OK.

I would also have to drop one skill to go for it. Not worth it.

Then show your version.

That would be a total overhaul and a different build. There are also quite a few auramancer builds posted here. Here is my take on elemental Paladin:

[pal4] *My face when I have realised that Paladin is not as tanky as it looks on paper **Credit for the picture goes to @Safarel. Thank you, man! Foreword I’ve had an idea to make a resilient and tanky Paladin caster for quite some time now. Obvious weapon of choice is Fire, however there are quite a few problems with this: first of all, by taking Aura of Censure we are missing out on huge damage boost from Divine Mandate, secondly, Paladin’s offensive spells aren’t exactly impressive when co…

The obvious thing to do is to go for Fire synergy on both masteries. For that you need to take GoE’s RR and Eldritch Fire in the devotions. There are plenty of ring/boots combinations to fill up on procs and not lose resists, like this one for example: 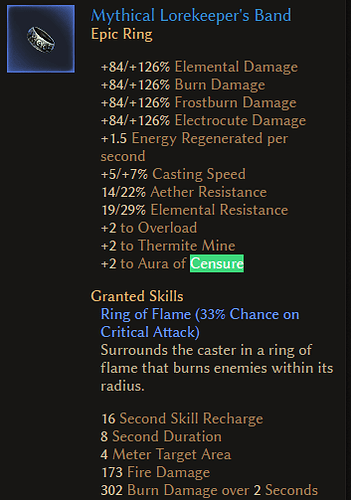 That would be a total overhaul and a different build.

Yes it would be a different build. Exactly my point.

Yes, It is quite appropriate actually

That’s a curious word choice for taking out the trash.

Interesting build here Duchy - like what you did here!

I made some changes to this build for faster killing. I had unoptimized devotions. I went for Eldritch Fire. I changed skillpoints out of DoTs to main skills because I do not use DoTs. I also changed weapon for one with base lightning damage (previous had physical) and it has more % elemental damage. Build lost practically no tankiness and it kills faster now. Link in the main post is updated to versioon 1.1.7.0.

It is only fire RR so I decided to not use it.

All your skills’ native dmg is fire. Fire is like 70% dmg here. Guardians are most definitely worth it. And - seeing that health is a big thing here - a point in mastery gives you almost as much health as a point in Haven beyond 5/10 plus oa/da/%dmg

Here, a quick redo, most stats are up, fire is +450% plus spirit, and the two most powerful devo procs in the game: https://www.grimtools.com/calc/D2pyWwyV

But build imo is not viable for deep endgame cuz no heals no sustain. Could do it this way: https://www.grimtools.com/calc/1NXYBLg2 but dunno how stats would look like when done.

Health is not a big thing. Even your version has less of it. This build is practically unkillable in SR 65-66. I don’t want to lose Vire for Guardians. Not worth it to me. I am not DPS hungry like Crucible buiIders. I also like using these two movement skills. With little points in Vire it is useless. It is a skater and a thrower at first and aura damager as a second. Devo changes are worth trying. I will look at it.

The changes in items you made are not necessary. This I will try https://www.grimtools.com/calc/eZPMD8gN. Changed to your devo map. Suffix on shoulders is of readiness. It doesn’t show now. Some error in GT.

Sure I get it thx for a prompt reply. Unmodded Vire on a caster setup with low wpn dmg is not worth it. At 18/16 it deal like ~200 fire, ~200 burn/s, and ~110% wpn dmg more than at 3/16. That is less than one tick from your Censure. Guardians themselves at 14/12 in Celestial deal 150 fire ticks in an aura. And with no mods no cdr, Vire cooldown is like 2.4s. So if you multiply that by 150, Guardians actually deal almost as much pure dmg - debuff aside - than your base node in Vire. Even on your base setup, you’ll deal more dmg if you move points from Vire base node to Volcanic because Volcanic deal dmg every second.

However the flavor of zipping is still there as I left points in Tectonic.

No I had it in Volcanic Stride and specced out of it and it is better.

Negatory, sir. The points in Vire base node only buy you 120% wpn dmg. At 3/16 it’s already 130%. So, basically the difference is that of a single attack with your Beronath Fury there. Plus you got 7.5k wpn dmg here so 1/3 of what a wpn dmg build should have.

No I had it in Volcanic Stride and specced out of it and it is better.

This I will try https://www.grimtools.com/calc/eZPMD8gN. Changed to your devo map.

Great. However, I just remembered you got no cdr so Seekers don’t get down to 1s cooldown. Box would be necessary to proc them right.

Not how it feels in the game.

Great. However, I just remembered you got no cdr so Seekers don’t get down to 1s cooldown. Box would be necessary to proc them right.

Beter to remove point from Seekers and go for 100 % cold damage node.

40k on a 2.5s nuke, cool, I’m not judging… But Volcanic dmg is a tick so it’s every second, not every 2.5s. Vire does hit with both hands so there’s that but still those points - optimization-wise - would be better spent just about anywhere else. Anyway I wasn’t suggesting Volcanic, just brought it up as an example. Guardians is where imo you should go. It’s an auramancer and they got an aura, thematic and everything.

Beter to remove point from Seekers and go for 100 % cold damage node.

Absolutely not, I FORBID!

Seekers got 400 dmg aura. It’s basically like 2/3 of what your whole Censure deals. Not mentioning the 550 dmg explosion with +60% crit dmg.

Never had a problem with killing stuff. These movement skills are quite potent even without dots. The only boss that takes long time is Mad Queen. Always finished within the timer in SR with lots of spare minutes. It looks to me like a lot of things are frowned upon by CR players which are actually not bad. Health regen, movement skills without dots and more…

I don’t have that many great things to proc these devos anyway.