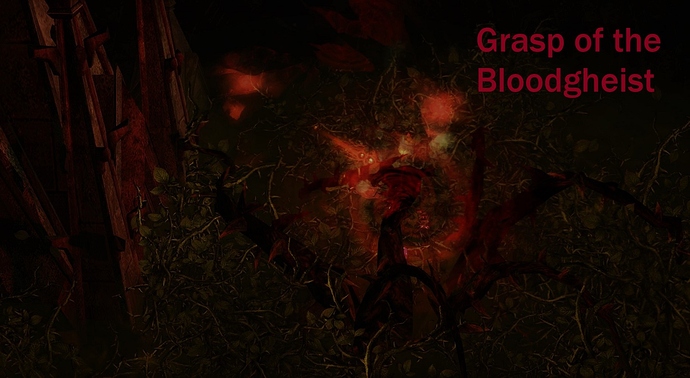 Intro:
This is my first build forum build post in awhile. Hopefully I’ll keep some motivation to get another couple I have enjoyed lately up here. There was talk about how much the wildblood nerfs actually hurt various builds. I also was involved in a private conversation about vitality primal strike. Funny enough a couple days later, and entirely separate, this thread popped up discussing the shortcomings of the set as well. (Not for the first time either) So as is often my inclination, I tried to make things work. I honestly was a bit surprised at how well the build turned out. @Dmt 's Curse of Cain ritualist probably is still better suited to safe deep SR play due to more ability to apply damage while moving. But this build will mow down 75/76 at great speed. If you are looking at conjurer @MergosWetNurse did a nice version here. Or if bleeding is more your style
@mad_lee 's trickster is almost certainly still formidable after the wildblood nerfs. One day I will probably update my original conjurer post as well

Affix rolls are honestly fairly open to farming. Ones that give resist overcaps/OA are preferred. Although a suffix of the wolf will do in a pinch. The SR video was done with lower overcap resist and low dps than the above build. (linked in video description) There are a lot of options that will work on the amulet slot. Either kaisan amulet, Death-Watcher Pendant, Wretched Necessity, or Bysmiel’s Iris fit nicely into the build. There are medal prefixes that would allow you to cap primal strike, but they are not necessary.
The rotgheist set itself just isn’t worth taking the full thing. The stats from the three/four pieces bonuses are easily beaten by other gear even if you didnt take the wildblood set. It really could use some CC resists somewhere and probably some DA as well. A stronger than full rotgheist vitality PS build can be built by taking a +1 amulet and a +1 belt. Personally I think a modifier that requires a melee weapon (like the 2h ranged bonuses on Harbinger set) to give primal strike extra radius similar to ultos should be added to the shoulder slot to prevent the passthrough ranged version from being totally crazy.
Self-buffed stats 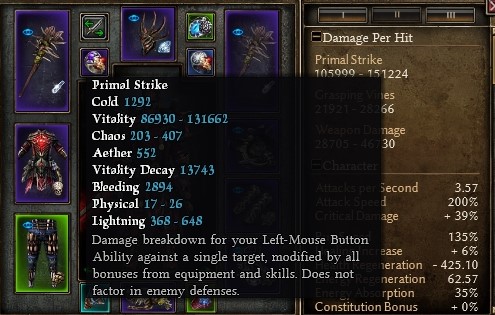 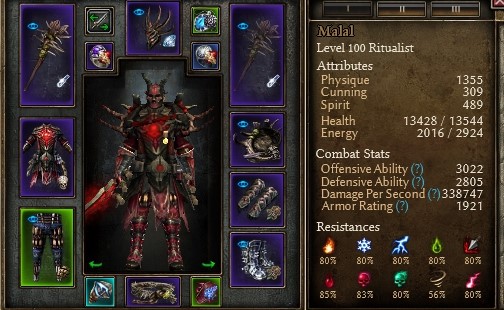 Performance:
Crucible 170 average is around 5:00 with good piloting. The mutators on this run were not great. Shattered for -10% total damage 150-160 and Leeching for +15% vitality resist for monsters 160-170. Tbh I’m rusty on this type of character, and I frequently over cast devouring swarm.


SR 80 cleared in around 6minutes with chunks + boss room with 1 death. This run was with a different less overcapped resist version listed on the video description. The main thing is to make sure you always have ravenous earth up to debuff enemy damage. You will get popped more or less instantly otherwise by bosses. Some SR bosses like Gargaban will not be fun to say the least lol. I very rarely do SR, so pulling bosses is not my strong point.

Nice one. So more of a Wildblood build than Rotgheist PS. I didn’t think that pure Rotgheist would work. In another vitality PS thread someone posted something similar like this but with a Conjurer.

Nice to see build posted from you! You’re one of the best, Valinov!

It’s really great result for Rothgeist build, which we know isn’t that great of a set. And creative use of Wildblood set after the nerfs.