So I was playing the Grim Dawn Community Season 1 and needed a build that can facetank the superbosses Ravager and Callagadra and that is also cheap and quick to put together without too much farming. I basically ended up doing a budget variant of another retaliation witchblade I saw on the forums here some time ago, but I can’t seem to find it anymore in the build compendium. The build was either by @grey-maybe , @mad_lee or @AlkamosHater iirc. Anyway I made the build more budget and HC friendly and also tested it recently on patch 1.1.9.1 again. Season 1 was a softcore league, which is why this is a softcore character, but it still has 0 deaths as you also can see in the video, so it’s perfectly HC viable. 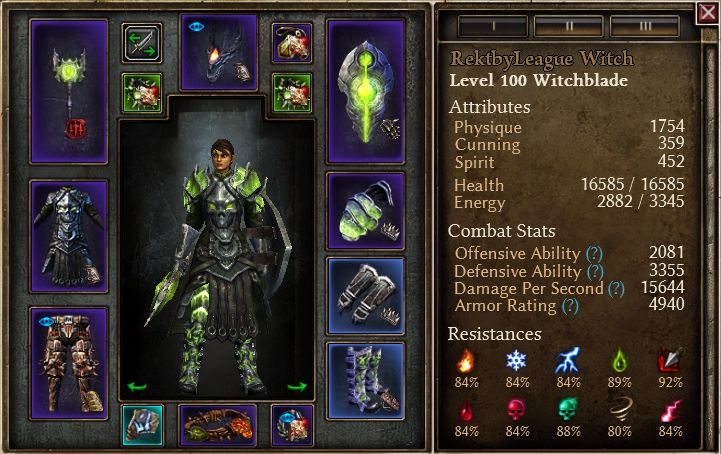 Highlight video from patch 1.1.9.1, including Ravager and Callagadra kills:

Not the quickest char for any content at all, but it does what it’s supposed to do. Facetank Ravager and Callagadra with rather low gear investment compared to other retal builds.
As always any kind of feedback is apprechiated!
Feel free to check out my other builds in my HC build collection!

The build was either by @grey-maybe

never have i been insulted that much on the forums.
it was lee’s build, i prefer to stay 100 miles away from them filthy retal things.

living fortess does not have 100% uptime though.

True.
Kinda curious how you guys value armor, because from my limited experience i’ve never felt it made a big difference. I very rarely build tanks but i’ve tried stacking armor to like 3k when i’ve had trouble picking up phys res and it felt somewhat lackluster.
Some secret i am missing? I guess maybe it’s the combination of phys res + armor?

Same for me. Once stacked 4k armor and 40% phys resistance on Warlord with shield. Was dying miserably to mobs on sr90.
I feel like the only encounters/conditions where armor matters are:
a) you have a lot of it
b) you have other sources of flat absorption, e.g. seal, ascension
c) you have miserable physical resistance and can’t aquire more, in that case armor will save you against trash mobs, but heavy hitters will probably still beat you to pulp.
also the higher the scaling goes the less effective armor becomes, so at certain point it’s just not worth going for it.