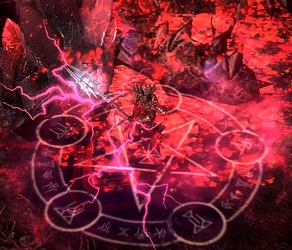 From what I’ve seen so far in the forums, Vitality Primal Strike seems to be looked down on due to lack of support, and the Rotgheist Set is probably better used on a Dreeg’s Evil Eye build.

With the 1.1.7.0 change on the Rylok Mark to include Lightning to Vitality conversion on Primal Strike, some have tried but had issues on the Torrent conversion, which isn’t affected by the Primal Strike one. The proposed solution was global Lightning to Vitality, but Rotgheist can only give up to 72%. I’ve thought about using Valguur’s Helm for full conversion, but the bonuses from Rotgheist will be dropped.

With these things in mind, I decided to build a Vitality Primal Strike character anyway, and this is what I came up with:

Final Thoughts:
Vitality Primal Strike isn’t as bad as I thought it would be, and I’ve learned more about the game mechanics as I was building and testing this. I’m still learning a lot about min-maxing characters, and I am very grateful for the community and the forums for the inspiration and insight.
P.S. I am currently learning how to format posts better.

I am also now playing vitality PS but it is quite different than yours. I think that your AS is low, you have poor CC res also. Morgoneth weapon is not a good choice I would say. I will post it sometimes next week. I think that Rotgheist can easily do SR 80. But I will have to test it and I have two other PS builds coming before this one as well. Also rings with RR should be used.

Thanks for feedback. I have a setup that includes RR rings and more CC res, but it involves a lot more green items besides the belt and medal. Looking forward to your builds!

Yeah I have 3 greens there (1 craftable). But I suggest to look at components. There is a lot of CC res on them. 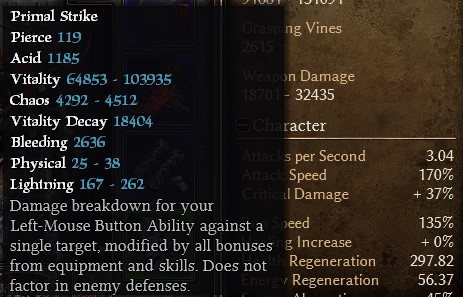 cool build, good to see someone trying to use the rhotgheist set

Have you explored the wildblood set? getting the full conversion from the medal lets you have some room with other sets

I had a conjurer that was unkillable, using full wildblood and 3/4 valguurs. spamming grasping vines and primal strike wps. SR75+ ez

DA is lower than I recall, I also think I was using serenity but you get the point.

. But the CC res could be still improved.

Rylok medal only converts the Lightning damage from the base skill, so you still need the helm from Rotgheist for the Physical part. And there’s still the problem of converting Torrent since it requires Global Lightning/Elemental to Vitality.

And there’s still the problem of converting Torrent since it requires Global Lightning/Elemental to Vitality.

My aether and cold PS builds have no conversion for Torrent at all and they work fine. I don’t think it is that necessary. I can’t say if vitality will be different in SR. I am now halfway through the main campaign with it. And it behaves good so far. I have not yet noticed any weakness of the build.

I am still not sure how Torrent exactly works. Do you mean it’s not as important in terms of conversions for overall damage?

Torrent is an AoE skill and I have no problem killing groups of enemies with those builds. I don’t think it is that important. I only softcap it or go a little over softcap.

Torrent deals weapon damage. And has some lightning flat on top of it. If the flat is not converted I don’t think it is such a tragedy. And going above 12/12 yields little improvents in % WD. I would only put skill points in Torrent above 12/12 if all else is covered or if you have 100% conversion of lightning.

I think that main problem for PS builds are CC res (the higher the better the result), phys res (25 % - 30 % is OK), lifesteal (20 % is OK) and large enough health pool (how large depends on if you have some damage reduction or absorption - but going below 15k-16k for higher SR would be low). If WD averages around 25k it is sufficent (for ranged slightly above 20k is fine). AS should be at least around 170 %. RR at least 100 % depending on damage type.

this build most of the damage is going to come from grasping vines spam. BTW you can cast grasping vines while using PS without any animation cancelling.

I’ll keep these in mind, thanks for the info. Maybe Crate will give us a better weapon partner for PS Rotgheist.

I’ve noticed this too. Grasping Vines is instant cast, I was mainly using Bloody Pox to proc devotions but dropped it in the v2.

If you aren’t married to Full Rotgheist, you might want to try 3pc Blood Knight + Rotgheist Helm + Rylok Mark. You get everything you want from Rotgheist, plus Blood Knight’s 15% Phys Resist and 14% Attack Speed just what you need for PS spam.

Also, maybe try this Devotion map: https://www.grimtools.com/calc/YZeAzydZ. Very similar to yours, but I prefer Wendigo Mark to Ghoul. Wendigo attached to CoF or GV can provide a ton of healing that most importantly does not require you to hit (given this build’s challenges with CC)

Plus you get 8 more Phys Resist, Wendigo has great Melee VIT nodes, and Sailor, Lotus, Panther all have stuff you need. It will cost you some OA but you can always make that up on your greens, look for ‘Aggressive’ or ‘of Attack’ mods.

That version with Blood Knight pieces looks really interesting but CC res is not good (slow especially). I run on my version full Rotgheist set. Maybe Blood Knight could be better. I am not sure that losing Ghoul on a PS build is a good idea. 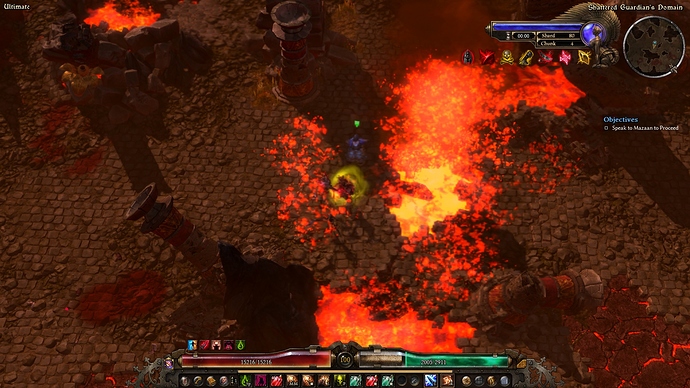 Scales + Ghoul sounds fun, I assume you are dropping Revenant?