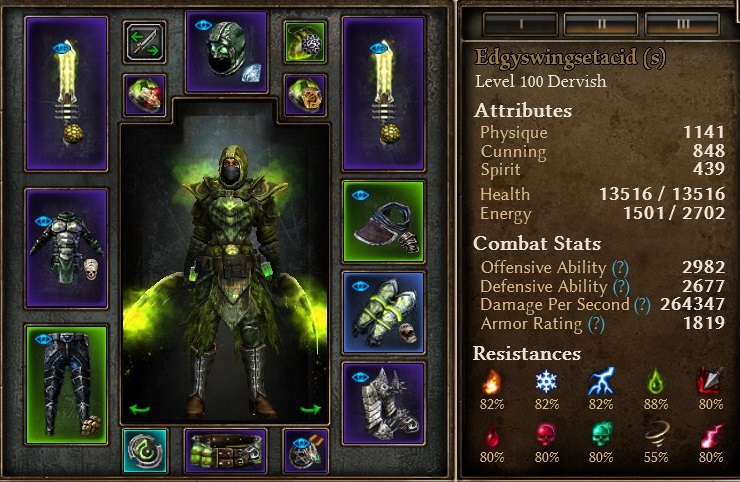 Venomblade dervish had changed over the summer.

Credits
@mad_lee for helping with the build.

Nice build, I love it!

Are you the guy, that came up with the idea to use Scales on acid map with Yugol and Abomination? Very intriguing approach.

Are you the guy, that came up with the idea to use Scales on acid map with Yugol and Abomination? Very intriguing approach.

Yes, that was me.

Probably more of a feedback thread, but what’s your take on converted scales? I had used it previous on vitality builds but I think the mixture of bad sets (looking at you, rotgheist) and generally higher vit resistance made me write up off. Now that I’ve played around with it converted on builds in the past few weeks and see the russian discord crew is doing the same on recently posted builds, wondering if it’s over tuned.

Don’t know what to think about it. 8 yellow actually takes a dedicated effort to get on non-physical or pierce builds, and it really does seem to need conversion away from vitality to make it sing.

You’re completely right, scales gives more sustain than any other ADCtH devotion, and the reason, imo, is simple - you don’t need a dedicated skill to bound it. Sentinel can still go for Bat+Eye, because it has 2 curses. On the other hand, as you have already pointed out, it also solves energy problems. The only drawback (apart from it’s price) - you need good amount of health (12k+) and you still need any other source of ADCtH. I’ve tried to build warlord only around it, and it hasn’t been enough.
That are probably the reasons why phys builds have gotten rid of ghoul in favor of scales.

Don’t know what to think about it. 8 yellow actually takes a dedicated effort to get on non-physical or pierce builds, and it really does seem to need conversion away from vitality to make it sing.

This is why I think Scales is just fine. Conversion is really needed and you need to be able to cover the costs. Scales was avoided like the plague for so long and it finally is a viable option to take, in my opinion.

Solid melee build, mate. And that M.I. amulet is definitely not overtuned, nothing to see here.

Great build. Full VB should be buffed. It has no skill points to do anything.

Mark of the Forbidden - amazing medal, BiS for any acid build.

This is arguable. But it’s BiS on this build for sure.

Shoulders - most of acid shoulders are garbage,

Venomtongue Mantle is ok especially for witch hunters with chaos. But only if you make a no-green restriction on your build.

This is arguable. But it’s BiS on this build for sure.

Perhaps, I just can’t remember any other medal except for green one for acid RoS.

Venomtongue Mantle is ok especially for witch hunters with chaos

Good choise for WH, however apart from conversion, this mantle looks bleak.

I still think that acid has some itemisation problems in boots, gloves, shoulders and pants slots.

But only if you make a no-green restriction on your build.

Those m.i. shoulders drop like dirt if you farm Crucible or SR. And they have been definitely overbuffed. Single-rare m.i. shoulder already shits on any legendary shoulder. So no more restrictions.

That’s true but also because acid has no items. Like op said, no shoulders, gloves, boots, pants (though now those pants are better and the other acid ones too). Also no non-oathkeeper belts (sorry, there’s one for necro, now).

Especially gloves. Can’t even use craftable Plagueguard Grips because acid affixes are probably the worst of the lot. They added some awesome “of Amarasta’s Alacrity” with attack speed for pierce that never gonna use it. While all acid affixes look basically like this “+40%acid, +40%poison, +40% acid res” for everything.

Still, there are some crazy good items for acid like Meditation is pretty op, this amulet now, I think Pestilence is pretty good, too.

yes, those pants are actually good, I overlooked %to avoid hit.

Just to remind: there are no acid gloves with %CS AT ALL. Literally. And the ones with %AS are crap, except for venomfangs, which are available only for occultist.

there are no acid gloves with %CS AT ALL.

Some parts of Acid itemization are indeed shitty 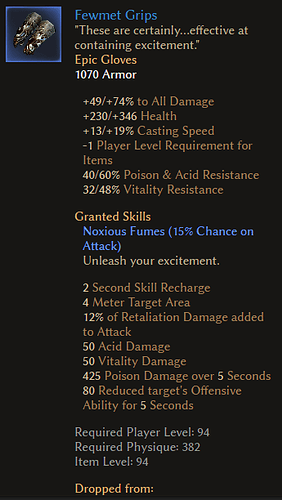 that sweet acid res on acid items… Smells like… victory.

The blue acid gloves are doable but imo Iceskorns with crit and convertible flat DoT and crazy attack speed are almost always better.

And acid builds are still the ones dying most from Kaisan because of no phys res on anything lol (gotta love them acid rants under a top acid build though).

Hi im currently levelling this build and I founs I have blueprints for some of the items. What extta attribute should I be looking out for? Crit damage maybe?

%Physique or Slow resistance. The best ones.

Hi, I am sorry but I’m new and I would like to ask how do you get to Scales in the devotion tree. Is there a guide for this?

get crane constellation first, then pick up lion and full scales, and then get rid of crane.