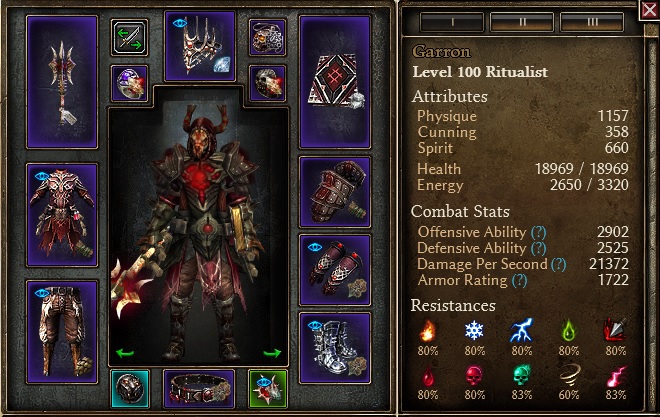 Introduction
I’ve had this build complete and thread more or less written for about a month now but didn’t opt to post it as I didn’t think it was worth showcasing due to low stats like OA/DA but a few people encouraged me otherwise. I guess someone out there that enjoys hybrids will appreciate it

Abilities
Storm Totem (Twin Fangs): Our best source of spreading damage throughout crowds.
Wendigo Totem: Great source of health recovery that acts independently. Also increases all Vitality/Bleed damage we deal while stood in it’s area.
Devouring Swarm (Living Shadow): Significantly increases all Vitality/Bleed damage we deal and adds some damage of it’s own on top.
Siphon Souls (Rend): More Vitality/Decay/Bleed damage in a big AoE with strong debuffing utility.
Reap Spirit: One of the best sources of Vitality Decay in Necromancer despite the lack of AoE. The pet doesn’t do a lot for us due to lack of pet-scaled pet damage.
Ill Omen: Reduces the damage enemies deal.
Mark of Torment: Lowers the damage you take by a significant amount. Great in a pinch.
Pet Attack: Directs your pets to focus on one target.

As they are a big portion of the character, lets take a minute to go over how stacking DoTs on player-pets work and the ones we use:

In total, this leaves us at -184% Vitality resistance, -117% Bleeding resistance and -13% Life Leech resistance.

Attributes
Enough in Spirit to equip our off-hand, rest in Physique for much needed DA.

Playstyle
Keep enemies debuffed with Devouring Swarm and drop a Wendigo Totem down for the juicy % Vitality/Bleed bonus. For general crowd clearing, Siphon Souls and Storm Totem should handle that relatively well. It also helps to have as many of your pets active to increase clear speed.

For Heroes or Bosses, we want to debuff with Ill Omen as well, add Reap Spirit in and Mark of Torment to increase facetanking capability.


Crucible run by @romanN1. Big thanks to him for trying it

Acknowledgements
@Superfluff. Inspired the build with his own Vitality/Bleed Valguur Ritualist long ago. All I did was put my own spin on it.
@Rhylthar. I can’t not tag Rhylthar on a Bleed build and a lot of people should know why.

Other Player-Pet DoT Builds
These operate on the same idea of stacking notably large amounts of DoT damage through multiple player pets but are stronger than my own:

S O C I A L D I S T A N C I N G [image] This is the first build I played since the patch went live cause I was very excited with the new Oathkeeper green amulet. Pretty generic RE build that gets 4 Guardian summons but this nets the most acid>vit conversion on guardians so this at least a bit more unique than Blightlord.

[image] GRIMTOOLS When you realize that title of Meshuggah's masterpiece won't make much sense here.

Thanks for a detailed writing. I like guides you can learn from.
Valguur is one of my favorite sets but I belong to Crusheeple clouded by the pursuit of DPS so I wouldn’t think of such a hybrid.
Could you upload a save somewhere?

almost instant death to ravager. can this build do any celestials at all?

If you were knowledgeable on the game and character building, you would see and expect this just by looking at the build’s armour, physical resistance and DA. More to the point, I did not advertise or say it was Mogdrogen/Ravager/Callagadra/Crate capable anywhere. Though I do at least hope you’re using consumables for more stats in those fights, using Mark of Torment liberally and not expecting an easy full facetank.

If you want to make Valguur Celestial-capable, try this build and the videos for an example kill:

This is a build made by @mad_lee, I am posting it on his behalf. [image] Foreword Ritualist was always a mastery combo I wanted to make something great out of. Sadly all of my previous attempts never really reached the mark. Class is ridden with problems typical for a mastery combo catered heavily towards pets: severe lack of stats, complete lack of cc-resists and mediocre survivability. The potential for exceptional Vitality damage output was al…