Hello, people! This is my new old build. I started it about a year ago during patch 1.1.9.1, but i didn’t finish it. After taking a break for a year, i’m back and i’ll finally bring a conclusion to several builds i left behind and this one is the first to reach the finish line. 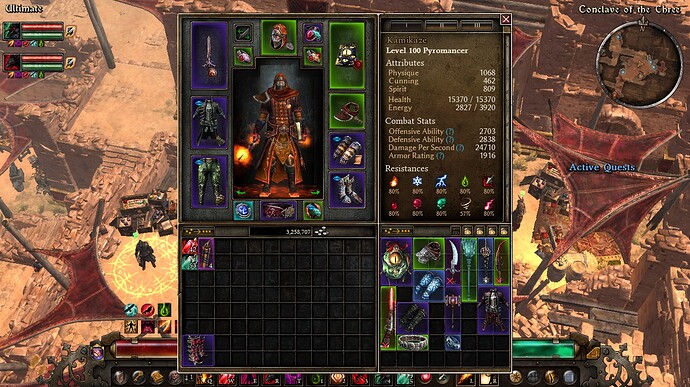 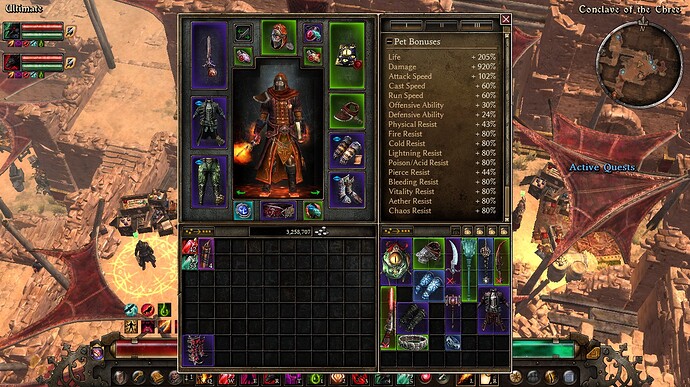 Stats with all buffs active.

This is a Fire Damage Hybrid Pet build centered around Summon Hellhound and the Mythical Dracarris dagger. Also, the Chosen Visage. The core skills are Summon Hellhound (duh), Hellfire, Flame Touched and Stormfire with Summon Familiar and Flashbang as ranged support. Thermite Mine and Curse of Frailty for RR, Bonds of Bysmiel for the Pet boosts, Blood of Dreeg for healing, physical resistance and poison/acid resistance and Possession for chaos resistance and damage absorption. Solael’s Witchfire is only used for the transmuter Consecrated Blade.

Stormfire is your main form of attack. The Dracarris has a proc that give some massive buffs but it requires the player to kill mobs. It won’t activate from Pet kills. So, you need to attack and kill stuff to make use of the weapon. The biggest disadvantage is the fact that the proc serves no purpose when fighting single targets or a small group of strong mobs with high health. You are always competing for kills against your Pets and they will win most of the time in those scenarios. That’s the main contradiction of this weapon. You will be able to make use of the proc most of the time but there will be times when you won’t be able to take advantage of its full potential.

The other core equipment of this build is the helm and off-hand. The Chosen Visage provides some nice flat fire bonuses and crit damage to Flame Touched and Hellhound. Unfortunately, it isn’t very easy to farm for a good one as it drops from Korvaak’s Chosen and those guys can also drop other two types of helms. The off-hand greatly improves the damage of Hellhound and it can be vendor farmed at the Steelcap District salesman.

The build has two choices of amulet. I decided to use the Mythical Sovereign Ruby of Domination because it converts the Hellhound’s chaos damage to fire damage, And it also give the doggo some physical resistance and the sovereign proc is pretty nice as well. The other option is the Zaria Amulet which further improves the Hellhound total damage and it can be farmed quite easily, but it also lacks better bonuses to skill points.

The Mythical Fiendmaster Raiment is great for the aura and the skill and Pet bonuses are very good as well. You don’t need Zantarin’s Mantle for the shoulder slot. It was convenient for me as i had it stored in my shared stash and the Insight proc helps a lot with energy management. The Mythical Fiend’s Flesh Mantle is pretty good here. The Mythical Voidmancer’s Cord is decent for the resistances to Pets and the +3 to Summon Familiar. The Mythical Deathwalker’s Grace provides some physical, pierce and vitality resistance alongside its proc. And the Mythical Wildshorn Legguards also comes with a bit of physical resistance, but the big thing about it is the skill bonuses and the boost to retaliation.

Retaliation is quite big on this build. You have several bonuses from different sources (Hellfire, Storm Spirit, Blood of Dreeg, Hellspawn). And there’s also the percentage boost from the pants, Aspect of the Guardian and Shepherd’s Call (with some negligible boosts from Temper). Pets can’t convert those numbers into extra damage on their skills, but the main point here is more about the punishing theme of the build. The doggo punish your enemies with its high damage attacks, but the enemies will also harm themselves on the doggo. Unfortunately, it’s incredibly hard to observe the damage numbers because there’s just too many numbers flying on screen, but i was able to observe values of over 10k when enemies strike the Hellhound. It’s more of a thematic thing but it does help to finish things off a little bit quicker.

Returning to equipment, the rings and medal i’m using are optional. Bloodsworn Rings can be vendor farmed from the cursed salesman in the Bastion of Chaos, but it’s incredibly slow and tedious. The medal was another convenient thing i had stashed and the extra 30 seconds to Blood of Dreeg is pretty helpful for me as i tend to forget about it during long and intense fights. It gives me a little bit more time to press the button again. The Mythical Mark of Unlife can be used for the DA and proc and you can also use Bysmiel’s Rings and medal. You could even use that full set for the extra bird but it isn’t necessary. Balancing out the resistances could become more complicated after the changes.

And finally, the relic. I opted for Mogdrogen’s Ardor for the +1 to All Skills and the Aether/Chaos resistance for Pets. However, as you might have noticed already, we don’t have a lot of minions. It’s just the doggo, the birb and the acid doggo (from Bysmiel’s Command). If you aren’t comfortable with these low numbers, you can switch to Primal Instinct for the little insect Pets which, conveniently, also deal fire damage. That might be better, actually. But i decided to stick with what i had as i just wanted to finish this build and move on to the next one. Also, Primal Instinct requires a Nemesis relic as one of its materials and that relic needs Kilrian’s Shattered Soul on one of its components and farming that simply sucks. I spent quite a few hours trying to get it, but the thing never dropped. So, i just lost my patience and gave up.

I used speed leveling on this build (Lokarr Set and Exp Potions), but, generally, i always focus on one skill tree at a time. Occultist is the main skill tree, so focus on it first. Put 1 point in Curse of Frailty early on but focus on maxing Summon Familiar. Once you are done with that, max Vulnerability while progressing through the mastery bar. Then focus on Hellhound until it’s maxed but don’t use more than 2 points. Always place at least one point in the mastery bar. Only place a single point in the Pet’s skills for now. And don’t worry about Solael’s Witchfire. It’s not relevant early on. Continue progressing through the mastery bar while placing a single point in the most relevant skills (Blood of Dreeg, Aspect of the Guardian, Bonds of Bysmiel, Manipulation). Once you hit level 50 on the mastery bar, max Possession. After this, it’s your preference. The skills you are going to max are Hellfire, Bonds of Bysmiel, Manipulation and Aspect of the Guardian.

After you are done with Occultist, move on to Demolitionist. Max Flame Touched, but only use a single point in Temper. Continue advancing until you hit Thermite Mine then max it. Max Blast Shield for safety. Use spare points to get Flashbang and the rest can be spent on the Demolitionist mastery bar for more stats, but don’t forget to get Consecrated Blade on Occultist.

Later on, once you have your equipment set, check your skills on Grim Tools and remove unnecessary skill points from skills above the ultimate level cap. Throw those points into the Demolitionist mastery (in case it’s not maxed) then balance the rest of the skills. I left Ember Claw, Infernal Breath, Bonds pf Bysmiel and Manipulation at the base max level and used some of those points to get Storm Spirit to base max level. You can choose Lightning Strike, if you prefer.

When it comes to stat allocation, you only need enough cunning and spirit to equip the dagger (396) and off-hand (724). While leveling, you can just throw enough points in spirit for energy regen and to equip off-hands you find while playing. The rest goes into physique.

When late game comes, you need to look at your final equipment and take into account boosts to spirit and cunning and then put only enough to reach the threshold for the equipment (396 for cunning, 724 for spirit). Everything else goes into physique. I have some cunning on one of the rings and spirit on the off-hand and shoulder. You can use potions of reshaping later on to redistribute the points, if necessary. I didn’t do it, but using one of those potions was the right call. I was simply rushing to finish the build and move on to the next one.

By the end, with my set up, i have Summon Hellhound and Hellfire at ultimate max level, Bonds of Bysmiel, Manipulation, Ember Claw, Infernal Breath, Vulnerability, Blast Shield and Thermite Mine at base max level. Summon Familiar at level 21, Aspect of the Guardian at 15 and Flame Touched at 20. The numbers may vary greatly depending on your equipment choices. One good tip while leveling: use Searing Ember early on to cast Fireblast as your main attack. Then change to Greater Fireblast later. It helps a lot.

Phiu, what a long thread. But i had a good time writing it and an even better time while playing the build. It’s not a world beater. I only bothered with SR 50 because i had some serious problems with some tough enemies during the campaign (mainly Grava’Thul and Kra’vall). The Lokarr kill was pretty simple but i’m not very interested in attempting any other celestials or the Crucible. Hybrid Pet builds are always fun but they tend to suffer from a lack of numbers (Pets) or player damage. But i still prefer this style of gameplay as i like Pets but i also like to contribute to the fight with damage. Gameplay videos below. 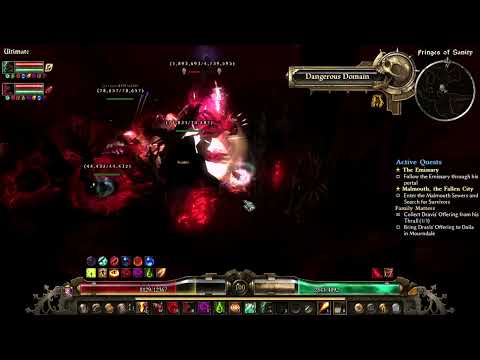 This was the Grava’Thul fight from way before the build was done and it simply sucked. I can’t believe i survived that in the end. 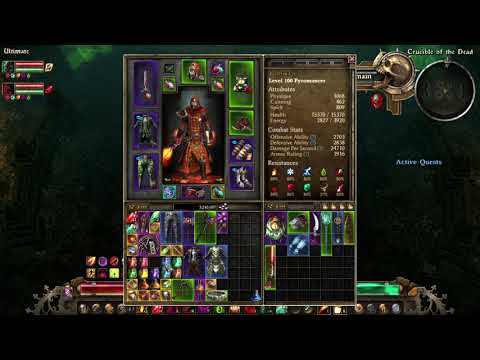 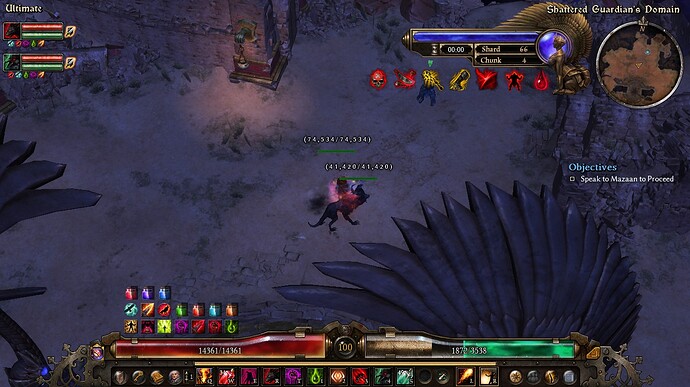 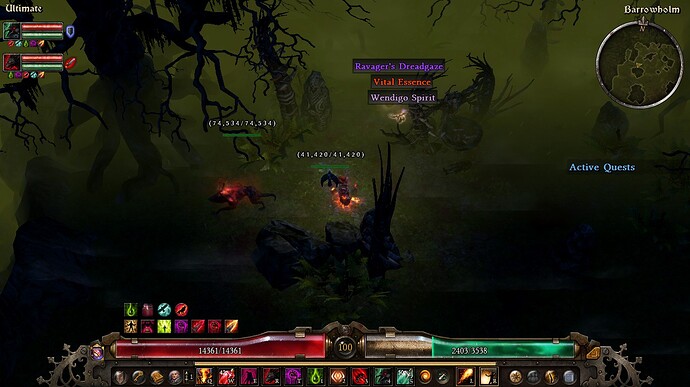 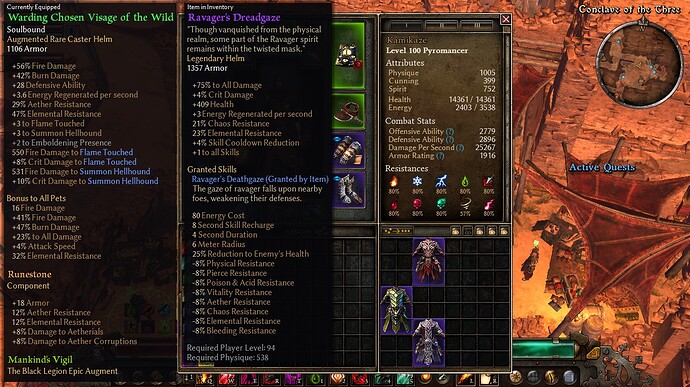 Could you please discuss attribute distribution in the Leveling section?

I added a couple of paragraphs about the stat allocation to the leveling section. The simple answer is: you just need enough cunning for the dagger and enough spirit for the off-hand. Look at your equipment to identify boosts to these stats and adjust the values accordingly. This is something that matters mostly for the end game. In the early stages, you can simply invest enough in spirit for energy regen and to equip off-hands you find while leveling. Throw everything else into physique. Then use potions of reshaping later on to readjust the values based on your final equipment.

New skill point distribution. I took 18 points from the Demolitionist mastery bar and used them to softcap Temper. The rest went into Blood of Dreeg. This resulted in an improvement in OA, DA and healing. I went to SR to test the build again and it was capable of clearing shards 65 and 66. I died once and ran out of time, but clearing wasn’t very difficult.

Another thing that i finally decided to try was beating a stronger boss and it worked! I defeated the Ravager of Minds. This was the first time i beat this boss and it was with a build i wasn’t super confident with. The fight was very hard (as expected) and it took quite a bunch of time and kiting. It lasted the length of two sets of 450 seconds potions (over 15 minutes). It’s a great accomplishment for a Hybrid Pet build with only three Pets (one of them being temporary). Doggo is incredibly sturdy and died only four times. He was the one doing all of the tanking and all by himself, since Birb was moved to minor healing duties and stayed close to me (Birb did not die once), so that’s pretty impressive, i’d say.