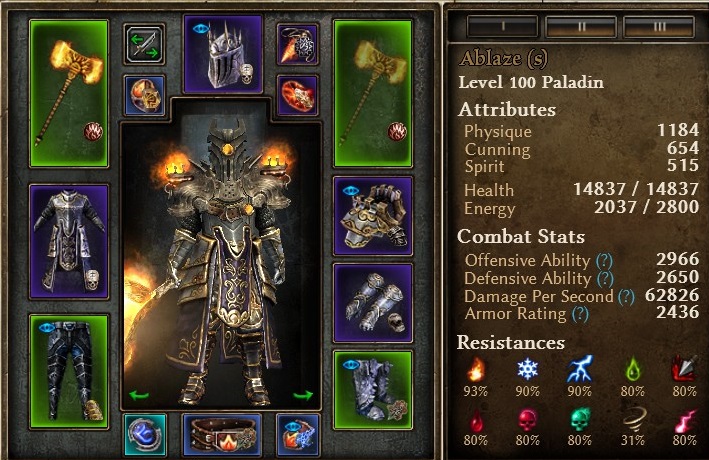 Glad to see some Paladin love! Thanks for explaining the mechanics of GoE and their interaction with devotion procs too.

Not just Calla but this is also requires very great piloting and… nerves… Great job!

Glad to see some Paladin love!

As i said, fire paladin become very decent with rework of the amulet and +1 to inq on helmet.

Not just Calla but this is also requires very great piloting and… nerves… Great job!

the moment i gave up on spamming stormfire i was able to beat them. But Calla is definetely harder due to tornadoes, sands and simply higher damage.

Interesting. I’ve been pondering a Vit version (Oppressor) recently. Curious how it goes.

the problem with vit is that the only way to convert acid to vitality is offhand, that block +1 to guardian offhand and messes up ele conversion.
Unless you want to pick crimson spike ofc, but then no pandemic dagger.

This took a long time to get posted. But still nice one!

the problem with vit is that the only way to convert acid to vitality is offhand, that block +1 to guardian offhand and messes up ele conversion.
Unless you want to pick crimson spike ofc, but then no pandemic dagger.

Vit is fine with 4 guardians tho cause RE.

Vit is fine with 4 guardians tho cause RE.

but thats not exactly solo guardians, just a good support.

True true. There’s just no other way to make it as good

Actually I wasn’t planning to use Pandemic anyway, I was going for Ascendant Authority for the AS on Guardians. Not sure whether that winds up better than the conversion or not, I’ve only given the build a quick ponder in GT (https://www.grimtools.com/calc/RZRdkWr2), nothing finalised. You can then get a bit of conversion from Infector’s Shade body and some extra from Pestilence of Dreeg if needed for over 50 % conversion. Still far off the mark but from what I see you don’t get total conversion either and it seems to work. Granted, everyone and their dog seems to resist Vit in this game so who knows.

i already have the dot part in burn, which is more important than converting the 25% of flat physical on guardians hit.

Granted, everyone and their dog seems to resist Vit in this game so who knows.

Wait, nvm, scratch the whole thing about conversion. The acid on GoE will stick cause it’s already converted once through the transmuter. It would have to be a split acid/vit build I guess. Going full Fire the way you do seems to be the only way to consolidate GoE damage.

Same as Storm Totem with the transmuter.

It was patched, you can no longer have Acid Totems by converting Vitality Totems to Acid:

V1.1.6.2 Hotfix 2 [Tech] Fixed an issue where Monster Totems would not appear on the map until you were very close to them. [Itemization] Component - Seal of Corruption: increased damage and reduced Energy Cost on the granted skill Legendary Non-Set Items Mythical Aethereach: increased % Elemental dealt as Aether for pets to 100% Mythical Bane of the Winter King: reduced % Cold Resist Reduction modifier for Veil of Shadows to -10% and increased Cold damage modifier for Mogdrogen’s Pact …

Why would these skills work differently though? Seems like that was an unintended effect and the patch does imply it was fixed (for all, not just conduit, even mentions the Transmuter specifically). Would be surprised if GoE still worked like that if it wasn’t supposed to.

Anyway this is probably not the place to have that conversation. Feels like I’ve unintentionally derailed this thread enough as is.

Storm Totem: damage can no longer be converted “twice” when using the Transmuter or Conduit of Wild Whispers

Would be surprised if GoE still worked like that if it wasn’t supposed to.

The patch doesn’t mention GoE and Acid Guardians are strong: https://www.youtube.com/watch?v=l4qpFsoprXg
Could be strong nonetheless but look at the beginning of the video: 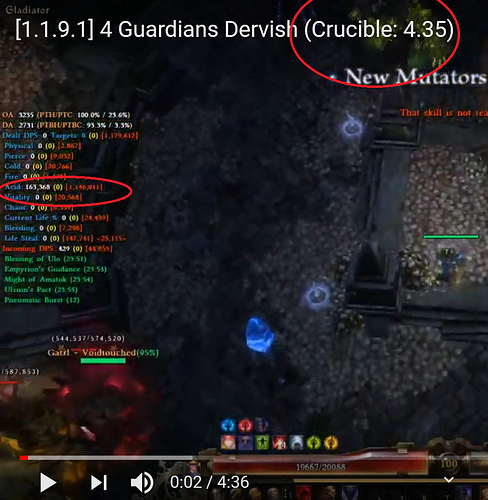 The first instance of damage should be a tick from the Celestial Presence aura, which is pure Acid. If full conversion was happening then there should be no Vitality on the screen since between 2x Ring of Shuroth and Pack of Deadly Means the build should have 100 % Vit to Acid conversion. Yet vitality damage is being done, however little. Hard to say exactly what is coming from where. I just don’t see a logical reason why GoE should be convertable twice when most things aren’t.

I forgot about Celestial Presence

I guess I’ll test it quickly or maybe Grey will tell us
I even have my own Acid Guardian build to test.

Good job figuring this build and pilot it! And glad to see Paladin being pull up in the class ranking.