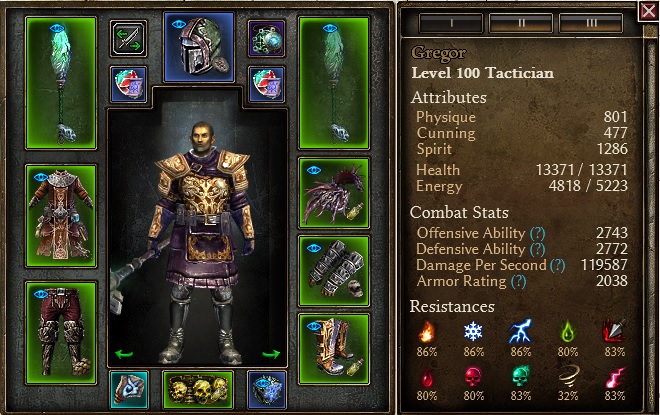 Affixes aren’t amazing but some aren’t awful either. Took about 2 days of farming to find everything and there still could be improvements made.

If you’re not familiar with Grim Dawn yet, don’t worry if it looks overwhelming. I will go through everything further down in the Levelling section.

Final Word
Since early March, 2 things related to Grim Dawn have been on my mind. The first was v1.1.9.1 and the changes it brought (some of which I’m finally excited to get into in the coming weeks/months) and the second is this guide. Due to real life things, I didn’t have a ton of time to spend on it until mid April and what time I have had has been scattered so it has been a project in the making and one I did not want to abandon.

I have to give thanks to the following members of the forums for looking over and criticising builds I hand them, answering questions or helping newcomers by putting guides of their own out - Nery, Stupid_Dragon, Maya, thepowerofmediocrity, ulvar1, RektByProtoss, Monceaux, sp00ky and AlkamosHater.

Special thanks to Dammitt for creating valuable resources in the item database, build calculator and world map that I’ll have used several times in the guide to better illustrate specific pointers.

Have any questions or don’t understand what to do somewhere? Feel free to comment below or direct message me over the forums or elsewhere and ask. As always, I appreciate hearing from everyone that tries to follow the guide how it goes.

I am especially keen on hearing if the levelling guide is easy to follow or if there’s an area you feel could do with some improvement.

I’m surprised that nobody leaved a reply here. I’m currently level 13 with this build. I felt a little squishy at first. But the more we have skills and stuff, the more our character kills fast. So far I like playing with my Inquisitor. I never used Inquisitor as main class before. I always played it as a support.

Your guide is pretty clear. I had to see your final setup to know how much points I put on Physique and Spirit. But it’s good for me. It was just one click ^^ Thanks for your guide, and for your build which entertain me

Thanks for the reply, yes it will feel somewhat squishy early on as there aren’t enough mastery points to pick up Inquisitor’s Seal and Aura of Censure (later Menhir’s Bulwark) to max for defense for quite awhile, once you do though, it will be safer to play with just requiring a bit of consistent health recovery which the Bloodsworn Sigil provides in droves right before the Loghorrean.

Thanks for mentioning the attributes as well, i’ll add a bit into the guide for it, I’ve been meaning to add a section on faction choices (Kymon’s Chosen vs Death’s Vigil, Outcast, Barrowholm) but keep forgetting so I can do both at the same time

Good luck on the playthrough and if you find yourself struggling at any point, feel free to send me a message.

I found it’s possible to kill Acedian Aldric without Censure (at least in Normal not Veteran). Buuut… don’t do this. I died 2 times

This is very well-made and well-written. I love that the pieces are easy to find and the results seem to be there nonetheless.

Great job, and thanks for linking this on my thread

Good read for beginners even if they are not going to play this, just to learn how to think in Grim Dawn.
Btw I would personally mod FoI to be Aether looking from the start because it sucks to only have it at the very end imo.