Introducing Slowbama - a Slow Battlemage - the living Citadel. On the one hand it is a serious build, but on the other hand it is not. If there is real interest in playing an endgame battlemage, my recommendation would be rather:

[image] how do battlemages see themselves / how do they really look like I just noticed it’s been almost three years already since I first made this build and then kept tweaking it till now. And in the end I really like how just an okayish build for a bad class became one of the tankiest builds in the game for now with decent damage potential. Unfortunately, battlemage will always be a class of two builds, but we can do little with it. [скурж] 1.1.9.6 GRIMTOOLS LINK - CLICK ME Extra-tanky …

GRIMTOOLS [1] [AAR] AAR with Ulzaad’s proc, crafts for slow res Hi, it’s been a while since I’ve posted a build on the forums due to lazyness and taking breaks from the game, but phys AAR (Albrecht’s Aether Ray) Battlemage is one of the builds I had been intending to post for a long time. Why AAR Bama you ask? Well, it has been an obvious build ever since Inashkor’s head got bonuses to Aether Ray. Some people did post their own versions a long time ago, I decided to min max mine recently. …

That said, here is a battlemage designed for absolute defence - utlizing the currently rather seldom used damage reduction via high defensive ability (DA). It uses also all the permanent defensive skills (to reduce incoming damage) of the soldier and the arcanist mastery - even at the expense of damage. The result is in slight contradiction to the classic builds, which have a “slightly” stronger focus on damage. The killtimes are therefore relatively long and the build will likely only achieve speed records at the opposite side of the ladder (slowest build to do anything), but the defensive focus allows nevertheless some interesting results.

The build can handle Ravager of Flesh, Callagadra and Avatar of Mogdrogen - all without additional pharma (apart from Tonic of Mending and Elixir of Spirit). Shattered Realms 85 can be achieved relatively easily (just be careful with arcane heroes) - while slow, it can be finished still within the timer, Crucible is also relatively easy (no banner, no buff - 150-170, around 17 minutes with Armored - did I already said that the build is slow?). The build is not unkillable (had one death in SR80 - likely after an arcane hero debuff), but as long as all buffs are active, it is extremely hard to die. 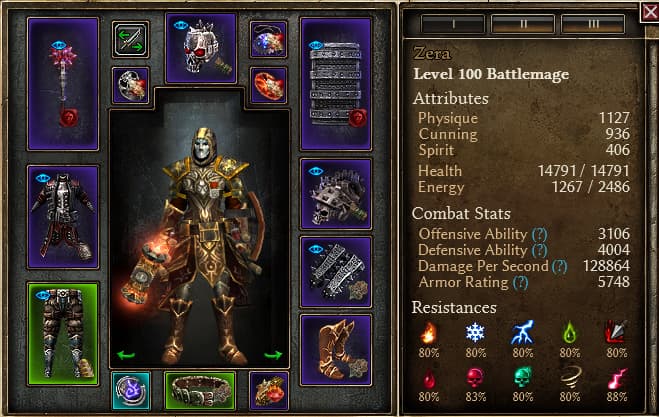 The character uses the full Warborn set with its focus on Cadence and War Cry. Both rings are standard for physical damage builds - with their resistance reduction - and are relatively important here, as only War Cry (and Assains’s Mark) provides resistance reduction. The amulet is Spellscourge Deflector for its bonuses to Overguard (almost 24/7 uptime) and the +1 to Soldier mastery.

Mythical Untouchable is here for the increase of the DA and its buffs to Overguard, Citadel (with corresponding DA bonus) is here for DA, Mark of the Voracious One for the Overguard boni. Colossal Grasp is standard for an Overguard S&B soldier, Stonetreaders are here for the +2 to Overguard, the armour bonus and the proc. Ugdenbog Girdle for the +1 to Soldier mastery and the armour bonus and Kubacabra’s Chausses for +3 to Deadly Momentum. The latter both have affixes to have sufficiently high resistance values - and to increase the DA. GDStash disclaimer: All gear is maximized, means the best out of several items is used, Warborn helm was crafted with armor bonus.

The used components are relatively standard and mainly shall fix open resistance holes (including CC resistance)- with a slightly stronger focus on armor. To have a reasonable high offensive ability, the corresponding components / augments are used (and even 12 flat phyiscal damage can be scaled high enough with Cadence to overcome the armor threshold of normal enemies - as long as there is some resist reduction).

Skillwise, the strong defensive focus is visible in Menhir’s Bulwark, Maiven’s Sphere of Protection, almost maxed Overguard (with Markovian’s Defense for almost 24/7 uptime), max Field Command and the high investment in War Cry (and Break Moral). As last resort defense there are Menhir’s Will and Mirror of Ereoctes (minimal invested as almost never needed), other skill like Arcane Will and Nullification are not taken and not really needed. The main damage skill is Cadence which also provides a bit AOE damage because of Fighting Form. Blitz is here as mobility skill and to reduce enemy DA (but also provides some damage if Deadly Momentum is up), the second mobility skill is Violent Delights.

The rather strong defensive focus also affected the devotion choice - Solemn Watcher, Harvestman’s Scythe, three nodes of Obelisk of Menhir and Vire, the Stone Matron. The proc of the latter also is an important AOE damage contributor. The rest shall slightly increase the damage, fix (CC) resistance or provide resistance/armor reduction.

The gameplay is - Blitz into a group of enemies - cast War Cry and ensure that Overguard is up (always), and make Cadence strikes. Use Blitz for its AOE damage and debuff as often as possible. Depending on the enemy, the character can run into energy issues - so have Elixirs of Spitit ready. In case you will ever need it (or are debuffed by an arcane hero) - use Mirror of Ereoctes as last resort defense.

Some comments about the general build idea: The main idea is to reduce the incoming damage as much as possible. 70% of the initial damage remains after War Cry, 51.4% - 70% (depends on enemy OA) of this damage will hit (either because of damage reduction because of low chance to hit or by misses), the remaining damage will have to pass the resistances/shield/armor before being affected by the %damage absorption and finally the flat damage absorption of Overguard. All this damage reduction/absorption can be seen as a kind of health bonus and also as a bonus to attack damage converted to health / health regen (less damage taken, less health needs to be regenerated) - this also means that the almost 800 health regen per second here are not comparable to 800 on other builds (with less damage reduction / absorption)

Somehow, the character is - while really, I mean really slow - funny and safe to play. So it is imho an ideal character for either Hardcore or people who struggle (means: die often) with damage orientated builds. And as every boss kill happens relatively slow, you can see and enjoy all enemies skills. That said, there are better physical damage battlemages out there (see above).

Have Fun - and if there are question about the build, just ask. (perhaps there will be a reply)

From the FAQ: “If your PTH is lower than 70, any attacks that land will do reduced damage. The damage reduction multiplier is equal to your PTH / 70 (ex. if your PTH is 65, you will do 92.86% of normal damage on a hit, or 65/70). It is highly uncommon to go below a PTH of 70, though it can happen against targets that are significantly higher level than you.”

So having an enemy PTH of 60 - means the damage that hits will be 60/70 = 85.7% (or I got this completely wrong - as I just assume that the enemies play after the same rules and the damage reduction is not only applied to the player - but even than, there is at least the miss chance). But in general, having such a PTH vs nemesis (and factoring in debuffs which reduce your DA) requires a rather high investment in DA - which in general can be better invested in damage. Even this character can not always reach an enemy PTH of 60.

- but it was “tri ele” using discord too, so that might have contributed slightly

really not a personal fan, it’s like mega tankiness for superfluous tankiness sake, at the cost of a lot of unnecessary dmg loss.

But hey, i know there are people out there that enjoy super tanky builds regardless of kill times, and über tanky Bama is definitely a build that fit their niche

The build was initally a test - how far do I come with the damage reduction (e.g. I had not necesarily expected that Crucible is a non issue - as the slow killing time leads to lots of debuffs - especially under armored mutator). And after all went better than expected, I think - as it is rather different from the concept typically shared here - it is worth to share.

Cadence is used mainly as main skill to have at least one out of three attacks that does some real damage. And as Warborn brings boni to War Cry and Break Moral - Cadence was also the obvious main skill. Fist of Vire is however relatively important here - as it is a non neglectable damage contributor. I even made a run with the build from Conclave of Three to Korvan Sands riftgate almost (exception: 2 arcane heros) only using War Cry and Overguard - the damage to kill the enemies was only done by the Fist (including Ramzul). I would not say that this was done fast - but interestingly doable

yep, it wasn’t a comment on your build itself as such, just a personal comment on this type of build - def still worth posting since there are people out there that enjoy these types of builds
funny thing is, even tho i know i don’t enjoy super slow “immortal” tank builds, i’ve found myself making them quite often